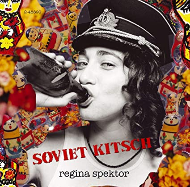 You love so deep, so tender
Your people and your land

You love 'em 'til they can't recall
Who they are again

But I am not a number, not a name

But I am a carefully laid plan

OUR WORLD UNDER COMMAND

You know if there's something I've seen/read/listened to/eaten that almost defies the words I would (normally) use to describe it that this is indicative of something exceptional. This is the case with SOVIET KITSCH, Russian-born and Bronx-bred Regina Spektor's third musical release. We can hear the influences that this passionate and prolific (Spektor claims to have written over 700 songs, at the tender age of 28) musician draws from. They include the Yiddish klezmer music of her Russian-Jewish heritage, "drunken sailor" songs (an example of this being the rowdy "Sailor Song" that sounds like a composition written at 3:00 AM in a smoky bar somewhere), soulful ballads ("Somedays") and much more. Though, for some, Spektor's unbridled and very distinctive vocals might prove to be too much, for me, they work brilliantly with her wildly eclectic tunes. She has been compared to everyone from Bjork to Tori Amos. Though, her vocals are soft, at times, and screeching at others, I really think Regina Spektor has a truly unusual and captivating sound comparable to none. And yes, she does play the piano and sing about quirky and unexpected topics, not unlike Amos, but Spektor is as far from a copy cat as you can get. How many copy cats have you heard of who can successfully meld together blues, r&b, gospel, folk and classical influences, all the while singing about topics like divorce, carbon monoxide and chemotherapy? Personally, I can't think of one. Buy this album today and draw your own conclusions about this marvelous young artist.