The Deer in Your Yard Are Here to Stay

The deer population of the eastern U.S. has exploded and cities are trying to keep it in check. But the options available to them are limited, and fraught. 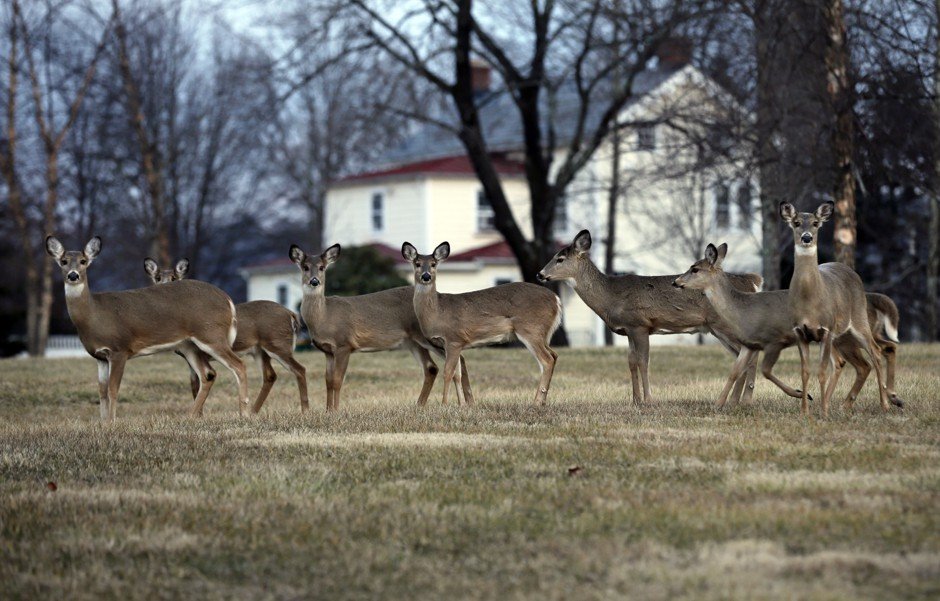 A group of deer pass through a yard in New Hope, Pennsylvania. Photo by Mel Evans/AP.

A decade ago, deer were a rare sight on Staten Island. White-tailed deer are thought to have abandoned the island in the late 19th century, pushed by human development to open land in nearby New Jersey. In 2008, the estimated deer population of the 60-square-mile borough of New York City was only 24.

Then the deer came back, swimming across the Arthur Kill and Raritan Bay from New Jersey in search of new habitat. And they reproduced—boy, did they reproduce. An aerial survey of the deer population in 2014 put it at 793. By 2017, the new estimate was between 1,918 and 2,188, an increase of 9,000 percent in just nine years.

To various degrees, towns and cities across the Northeast have been seeing an ongoing resurgence of deer populations in recent decades, as suburbanization patterns deepened and hunting practices faded. If you live anywhere outside of an urban downtown, you’ve probably noticed this trend yourself.

Deer are cute. We’ve all cried watching Bambi. So what’s the problem?

Well, there are a few. Hungry deer will eat (or trample) almost anything in a garden, becoming a pest for urban and suburban homeowners. Over-browsing by deer depletes the undergrowth of woodland, threatening birds’ habitat and the regeneration of trees. And when deer wander into the road, the results are not so cute. There are about 1.25 million collisions between cars and deer, elk, and moose annually in the United States, according to the insurer State Farm, and these cause around 150 human fatalities, and countless animal deaths, each year.

They also harbor the insects that carry Lyme Disease, which is on the rise: Reported cases have tripled since the early 1990s, and the true incidence may be 10 times higher, according to the Centers for Disease Control and Prevention. The black-legged tick that carries Lyme is commonly called the deer tick, and deer are the main reproductive hosts for adult ticks, but ticks do not become infected with Lyme from the deer—that happens earlier in the tick’s life cycle, usually from feeding on white-footed mice. (Scientific opinions on the exact relationship between deer density and Lyme prevalence vary considerably.)

The explosion of deer across the eastern U.S. has prompted some cities and towns to cull them. Ann Arbor, Michigan, recently carried out a combined sharpshooting cull and sterilization of does (who give birth to one to three fawns a year during a life span of up to 10 years, which explains how their numbers increase so fast). Mount Lebanon, Pennsylvania, a Pittsburgh suburb, has tried archery culls and sharpshooting hunts, but as of October 2016, the town was still experiencing a spike in deer-vehicle collisions.

Other municipalities hope local hunters can help. Charlottesville, Virginia, is finalizing a new ordinance that will allow bow-hunting of deer on private land on lots of half an acre and up. Mike Murphy, an assistant city manager, says deer have been a regular topic of discussion among residents for the past several years.

“I think part of that is certainly about ornamental damage—people who are concerned about their yard or garden,” Murphy says. “Part of it is folks concerned about ticks and public health, and whether there’s a relationship to having deer in their yard. And of course there is some documentation that we were having increased collisions with deer, a traffic safety issue.” 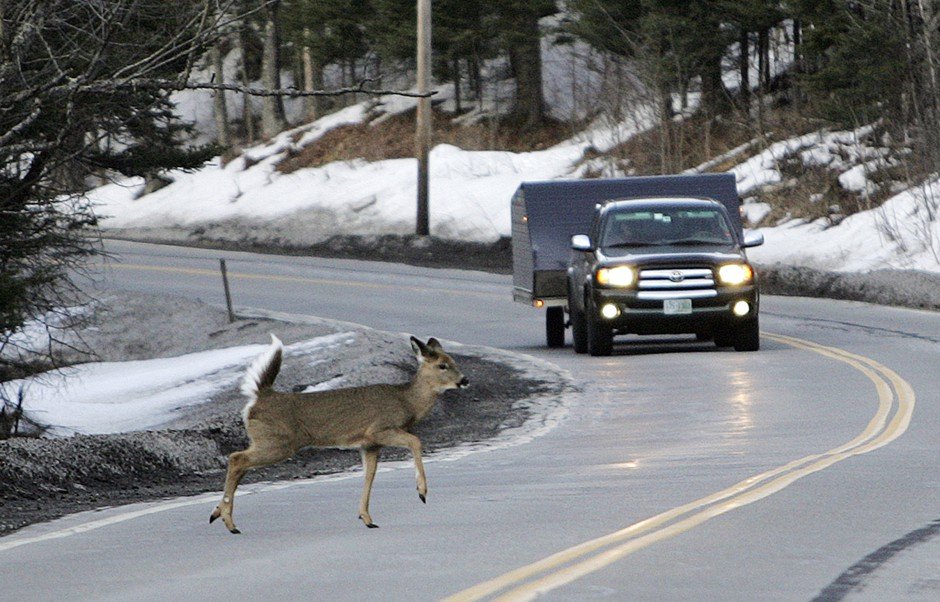 A deer runs across the road in Pittsburg, New Hampshire. Photo by Jim Cole/AP.

Despite all the local efforts to bring deer numbers down, residents of deer-thronged neighborhoods shouldn’t expect things to change much any time soon. First, one reason the North American deer population is growing is the near-elimination of their main predators, wolves and cougars. Second, as suburban-style development continues to spread haphazardly across the land, deer aren’t crashing our party—we’re effectively inviting them over for hors d’oeuvres.

“Deer are what we consider an edge species,” says David Drake, a wildlife specialist at the University of Wisconsin–Madison. “Any place where you have two or more vegetation types come together—a wooded area and a residential neighborhood or field—that’s a vegetation edge. If you think about suburban areas, or any area developed for humans, there’s a lot of habitat fragmentation going on.”

Deer aren’t happy in the deep forest—most food in forests is too high for them to reach. They prefer “edge habitat”—the forest fringes, where trees give way to grasslands. Or, say, where a subdivision abuts the woods. The typical American suburb, with its mix of ornamental shrubs, lawns, and small patches of trees, makes a pretty ideal deer factory.

And grazing in suburban yards has another benefit for deer, Drake points out: Unlike in the real woods, homeowners typically replant the vegetation they eat, so they can return and eat it again. “You have this big conveyer belt of food in suburban areas,” Drake says.

As recreational hunting has declined sharply, overpopulation has become a serious issue for many towns, and none of the current non-lethal methods for managing deer come without significant drawbacks. Sterilization is judged to be cost-prohibitive by many municipalities that consider it (it can cost upwards of $2,500 per head). Birth-control vaccines require a second-year booster shot, so the teams administering them have to track the deer down again a year later. The vaccines are also less effective than sterilization, and not a whole lot cheaper.

Tony DeNicola knows the methods firsthand. DeNicola is the president of White Buffalo, a Connecticut nonprofit that many cities have contracted with to carry out deer culls and sterilization or birth-control programs. White Buffalo did the sharpshoot and sterilization in Ann Arbor and the archery cull and sharpshoot in Mount Lebanon. It just performed vasectomies on 720 bucks in Staten Island in an effort to curtail the deer boom there.

“The evolution of options had been brutally slow,” says DeNicola, a Ph.D-holding wildlife biologist who founded White Buffalo in 1995. “It’s just because it’s wildlife. There’s not a lot of resources available for R&D.” But a better vaccine would not necessarily be a silver bullet, he says.

“You start with the politics. First, you have to get over the problem of someone having the wherewithal to kill or impact deer. Then you go from that hurdle to, ‘Oh jeez, it’s really expensive.’ Then you hope you don’t get a lawsuit from a faction that creates further delays or obstacles for politicians, who don’t like friction.”

When culls are arranged, protests from animal rights advocates often follow. In January, two dozen protesters marched across the University of Michigan campus in Ann Arbor with “Stop the Shoot” signs. (The university had offered to help fund the cull and allowed sharpshooters on its property.) Other protests have erupted in Shaker Heights, Ohio (a Cleveland suburb), Canton, Massachusetts, near Boston, Washington, D.C., and elsewhere. 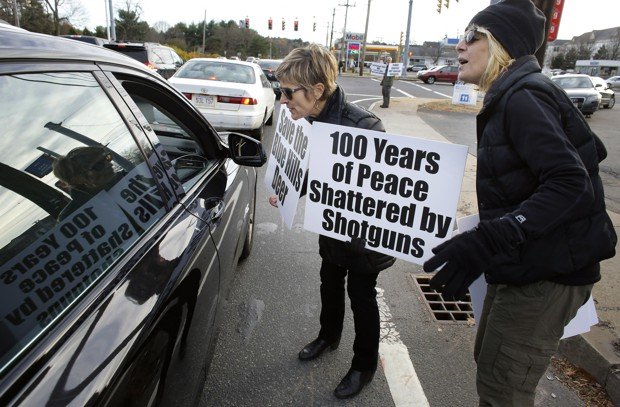 In Canton, Massachusetts, demonstrators protest a planned deer hunt in the Blue Hills Reservation in 2015. Photo by Steven Senne/AP.

DeNicola says he’s been sued eight times and received death threats for his work. Animal-rights advocates aren’t the only ones who line up against deer culls: Sport hunters will sometimes object to the practice if they believe it will dramatically reduce the local deer population, he says.

Lethal culls in highly populated areas are tricky. Discharging firearms is dangerous in dense neighborhoods and illegal in many jurisdictions, like New York City. That leaves archery, which poses a very low risk to human bystanders. (“It’s literally been decades since there’s been a fatality from an archery incident” in Virginia, Charlottesville’s Murphy notes.) But bow hunting is difficult, and DeNicola is skeptical that about its effectiveness. “People think they can just have a bunch of bow hunters show up and manage deer. It’s a falsehood.” He also says that archery can end up being less humane than firearm hunts, since deer wounded with arrows may not die right away.

The Humane Society of the United States opposes lethal deer control as both inhumane and ineffective. Among its tips to prevent human-deer conflict are for gardeners to switch to deer-resistant plants and use repellents, and for cities and states to put up fences that stop deer from crossing roads. In Hastings-on-Hudson, New York, the society is piloting the birth control vaccine PZP-22 in a deer herd. A similar trial on Fire Island reduced deer numbers. Hastings officials don’t expect to see a measurable reduction in the herd’s size for five to 10 years. In the meantime, the treated deer will still be carrying ticks, gnawing shrubs, and wandering onto busy roads.

Weighing the complicated pros and cons of each measure, and the political blowback, causes most officials who contact him to reconsider, DeNicola says. “With ninety-five percent of them, once they realize the politics and the cost, it’s: ‘I guess I’ll just keep living with the deer.’”

Not everyone will be unhappy about that. For every Staten Island homeowner who gets annoyed when a deer crashes through his yard and takes down a tree, there’s another who feeds them out of his hand. How many deer are too many is largely in the eye of the beholder. Whatever their feelings about their hooved neighbors, Americans in deer-rich places will be coexisting with them for the foreseeable future. If you plant tulips (a deer favorite) in your garden, expect to have company.

Email ThisBlogThis!Share to TwitterShare to FacebookShare to Pinterest
Labels: Deer, Not Leaving Your Yard, Rondoids