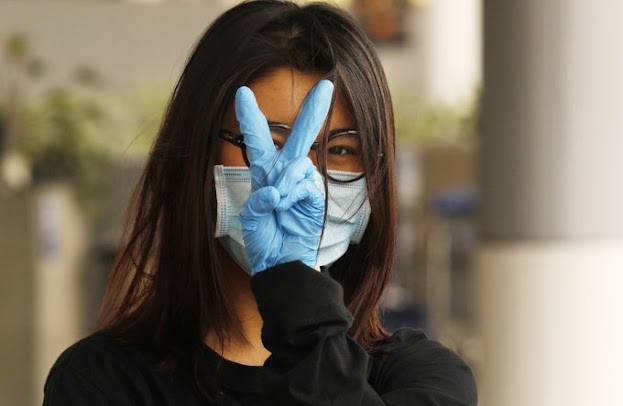 Just a month ago, Los Angeles County and the rest of California celebrated a long-awaited reopening, marking the tremendous progress made in the battle against COVID-19 by lifting virtually all restrictions on businesses and other public spaces. Now, the coronavirus is resurgent, and the nation’s most-populous county is scrambling to beat back the pandemic’s latest charge.

Starting Saturday night, residents will again be required to wear masks in indoor public spaces, regardless of their vaccination status.

The latest order not only puts the county further at odds with both the California Department of Public Health and the U.S. Centers for Disease Control and Prevention — both of which continue to maintain that vaccinated people need not cover their faces indoors — but puts officials in the precarious position of asking the inoculated to forfeit one of the benefits recently enjoyed.

“This is an all-hands-on-deck moment,” said Dr. Muntu Davis, the county’s health officer.

Vaccinated people are, in essence, being asked to make a sacrifice to help slow coronavirus spread among the unvaccinated.

Officials have stressed that those who have been inoculated have an excellent chance of being protected, even from the easily spread Delta variant, believed to be twice as transmissible as the conventional coronavirus strains. Between Dec. 7 and June 7, the unvaccinated accounted for 99.6% of L.A. County’s coronavirus cases, 98.7% of COVID-19 hospitalizations and 99.8% of deaths.

The new order, which comes a little more than two weeks after the county recommended the same protocols as a precaution, will go into effect at 11:59 p.m. Saturday — and Davis said it will be similar to the masking requirements that were in place before the June 15 reopening.

“We’re not where we need to be for the millions at risk of infection here in Los Angeles County, and waiting to do something will be too late given what we’re seeing now,” he told reporters Thursday.

The order will continue to allow indoor restaurant dining, although people will need to keep their masks on when they’re not eating or drinking.

Long Beach, which has its own independent public health department, will align with L.A. County’s health order. The other city in L.A. County with its own public health department, Pasadena, already recommends that everyone — including the fully vaccinated — wear masks in indoor public settings, and the city is “reviewing options for a mandate,” according to a spokeswoman.

Countywide, COVID-19 hospitalizations increased over that same time frame — from 223 on June 15 to 452 as of Wednesday. Still, cases and hospitalizations are still more than 93% below what they were at the peak of the winter surge. And deaths remain at historically low levels, at an average of about seven a day.

Although officials don’t expect hospitals to ever be as stressed with COVID-19 patients as they were during the winter surge, it’s still possible the healthcare system could be significantly affected if trends continue.

“There is still time to take action and protect people through vaccination, since we are starting from a lower baseline rate,” Dr. Roger Lewis, who directed COVID-19 hospital demand modeling for the L.A. County Department of Health Services, wrote in an email. “It is critically important that everyone eligible for vaccination who has not already been vaccinated does so as quickly as possible.”

An uptick in cases, combined with the presence of the highly infectious Delta variant of the coronavirus, was behind L.A. County’s urging in late June that all residents wear masks in public indoor spaces.

Davis said he expects the new order will remain “in place until we begin to see improvements” in community transmission.

He characterized universal indoor masking as one of the more effective ways to curb the spread without interrupting operations at businesses and venues.

But, he acknowledged, further intervention could be necessary if conditions deteriorate.

“Anything is on the table if things continue to get worse, which is why we want to take action now,” he said.

The vaccines are believed to be essentially as effective against the Delta variant as other variants. During June, 86% of people diagnosed with the Delta variant in L.A. County were not fully vaccinated — in the same range as the Alpha variant, where 91% of people diagnosed were not fully vaccinated; the Gamma variant, 92%; and all other variants, 89%.

But officials suspect that unvaccinated people have stopped wearing masks in indoor public settings and businesses, even though they’re still required to do so.

The new mask order, Davis said, “really is about making this a universal practice. It’s the easiest thing to do in terms of ensuring that we’re all protected, regardless of the risks that we have.”

Still, the renewed restrictions in L.A. County are undoubtedly a blow to some eager to put COVID-19 in the rearview mirror.

“I’m not nervous about the mask mandate again,” said Kali Mashayekhi, a California native and Penn State student. “I’m nervous that this means cases are going up again.”

Mashayekhi said the new order feels like “walking backwards,” but it puts her at ease knowing that the intent is to protect everyone.

“I’m vaccinated now, so I’m not worried,” she said. “But we need to do it for the safety of everyone.”

Elizabeth Diaz, a fourth-grade teacher in Hawthorne, said she’s continued to wear her mask indoors, even when restrictions were eased.

One woman, who declined to give her name, said she felt that the mandate was overprotective.

Hilda Solis, chairwoman of the county Board of Supervisors, said she hoped this was only “a temporary action, until we can lower our cases and continue getting more people the doses they need.”

With similar increases across the state, other counties are also urging residents to take additional precautions. This week, health officials in Sacramento and Yolo counties issued voluntary calls for all their residents to wear masks in indoor public settings.

“As health leaders of the communities in which we live and work, we have the special responsibility to practice sound COVID-19 hygiene as we serve all those who rely on us,” Dr. Josh Adler, UC San Francisco Health’s chief clinical officer, said in a memo.

Statewide guidance on face coverings remains unchanged, according to the California Department of Public Health. However, the department “supports local health departments, like Los Angeles County, making stricter policies based on the conditions in their community.”

“Vaccines remain the best protection against COVID-19, including the highly infectious Delta variant,” officials wrote in a statement to The Times. “We urge all eligible to get vaccinated, as it is the most important thing we can do to stop the spread of the virus.”

Already, cases are ballooning across California.

Orange, San Diego and San Bernardino counties have all had their daily case averages more than double since late June, and the state’s latest weekly average of 2,980 new coronavirus cases per day is up 175% from two weeks ago.

The CDC now considers L.A., San Bernardino, San Diego, Riverside and Imperial counties to have “substantial” community transmission — the second-worst classification on the agency’s four-tier scale — as all recently recorded seven-day case rates that were over 50 per 100,000 residents.

California as a whole is still categorized as having “moderate” community transmission, the second-lowest tier.

Despite increasingly urgent calls to get vaccinated as cases rise, California’s inoculation pace continues to tail off.

Over the last seven days, providers throughout California have administered an average of just over 56,000 doses per day, Times’ data show. Though that figure could rise as more reports come in, it won’t be anywhere near the high of the rollout, when hundreds of thousands of shots were going into Californians’ arms each day.

Only 52% of all L.A. County residents are fully vaccinated, while nearly 60% have received at least one shot. Some experts think it would take 70% to 85% of all residents to be vaccinated to achieve “herd immunity” against the coronavirus — when the sustained transmission of the virus is interrupted.

Health officials say there are many reasons a person may be unvaccinated.

Some may still be too young to receive the shots, or have an underlying health condition that prevents them from doing so. Others may be wary of potential side effects, or unable to get the time off work.

Another common sticking point is that all three available vaccines have been authorized only for emergency use at this point, and haven’t yet received full approval from the U.S. Food and Drug Administration.

But there’s undoubtedly a segment of the population that’s steadfastly opposed to getting inoculated — either for personal or political reasons, or because they’ve come to believe some of the vaccine disinformation that’s spread widely on social media.

Experts say it is possible to persuade people to get the shot. About 1 in 5 adults say they’re now vaccinated after being previously reluctant, according to a national survey by the Kaiser Family Foundation, and many of them said that conversations with family, friends and doctors helped.