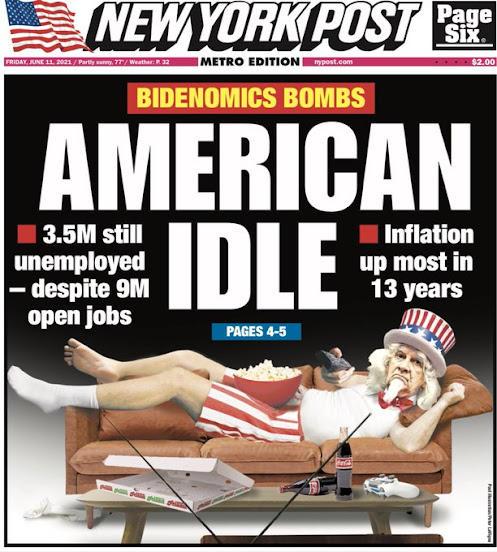 MILLIONS OF AMERICANS ON UNEMPLOYMENT BENEFITS COULD SOON SEE THEIR BENEFITS SLASHED, AS AT LEAST 25 STATES ARE LOOKING TO LURE WORKERS BACK INTO THE LABOR MARKET BY WITHDRAWING FROM THE FEDERAL PROGRAM THAT PROVIDES AN EXTRA $300 IN UNEMPLOYMENT BENEFITS EVERY WEEK!
That data comes even as US job openings soared to a new record 9.3 million in April, according to data released this week from the Labor Department.
see also
Inflation surges as consumer prices leap 5%, biggest jump since 2008
President Biden confirmed last week that he would let the federal unemployment benefits program expire after Labor Day
BUT SOME STATES WILL PULL OUT OF IT AS SOON AS THIS WEEK!
“Both initial and continuing claims are down but remain at nearly twice the pre-pandemic levels,” said Anu Gaggar, senior global investment analyst for Commonwealth Financial Network. “Most industries are reporting acute labor shortages but that could even out by Fall as the pandemic-era unemployment benefits are phased out and schools reopen allowing parents to return to work.”
at June 11, 2021