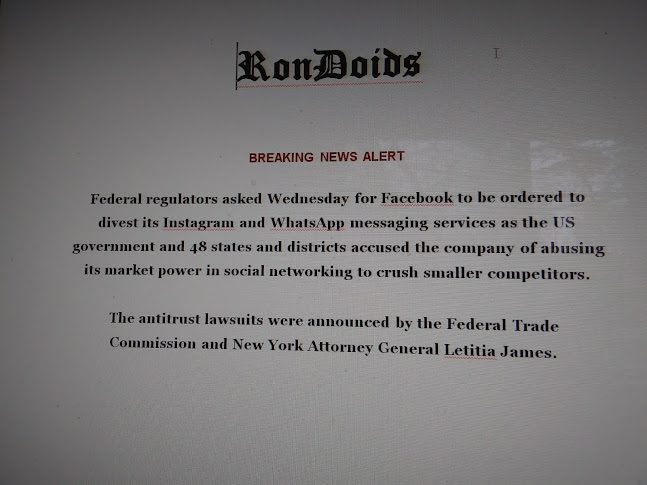 The Federal Trade Commission sued to break up Facebook on Wednesday, asking a federal court to force the sell-off of assets such as Instagram and WhatsApp as independent businesses.

“Facebook has maintained its monopoly position by buying up companies that present competitive threats and by imposing restrictive policies that unjustifiably hinder actual or potential rivals that Facebook does not or cannot acquire,” the commission said in the lawsuit filed in federal court in Washington, D.C.

The lawsuit asks the court to order the “divestiture of assets, divestiture or reconstruction of businesses (including, but not limited to, Instagram and/or WhatsApp),” as well as other possible relief the court might want to add.

The announcement is a major step that has been years in the making, with Facebook and several other major U.S. technology companies having grown quickly in the past 10 years with little government oversight.

But the lack of scrutiny has changed recently, with a series of lawsuits that now threaten to rein in the dominance of big American tech firms that have grown to be among the world’s most valuable companies.

Attorneys general from 48 states and territories said they were filing their own lawsuit against Facebook, reflecting the broad and bipartisan concern about how much power Facebook and its CEO, Mark Zuckerberg, have accumulated on the internet.

Facebook's share price fell by as much as 4 percent after the news, before paring its losses.

“Breakup Facebook” has become a rally cry for the company’s critics — from Sen. Elizabeth Warren, D-Mass., to one of Facebook’s wealthy founders, Chris Hughes, who last year wrote a 6,000-word case for a break-up. But the idea has never been truly attempted in court.

Facebook said it was reviewing the two lawsuits, and pointed out that the FTC approved the Instagram and WhatsApp acquisitions at the time.

“Years after the FTC cleared our acquisitions, the government now wants a do-over with no regard for the impact that precedent would have on the broader business community or the people who choose our products every day,” Facebook said in a statement, adding that it would have more to say soon.

“At the end of the day, if someone’s going to try to threaten something that existential, you go to the mat and you fight,” Zuckerberg said.

Even if government lawyers win a judgment against Facebook, it would be up to a federal judge what to do about the company’s dominant position. It’s rare for a big company to be broken up, but it’s happened in the past, as with AT&T in 1984.

Facebook bought Instagram for $1 billion in 2012 in a deal that was approved by the FTC at the time in a 5-0 vote, at a time when Instagram wasn’t widely used. Facebook bought WhatsApp in 2014 for around $22 billion.

This time, the FTC’s vote to sue was 3-2, with Republican Chairman Joseph Simons joining the commission’s two Democrats, Rebecca Kelly Slaughter and Rohit Chopra, in favor of bringing the suit.

The states’ suit does not explicitly call for Facebook to be broken apart, instead asking a federal court to halt Facebook’s anti-competitive conduct in general and take any other action that the court sees fit.

“By using its vast troves of data and money, Facebook has squashed or hindered what the company perceived as threats,” New York Attorney General Letitia James said at a news conference announcing the states’ lawsuit.

James said that the states’ lawsuit was aimed not only at Facebook’s past acquisitions of rivals but on its treatment of competitor apps. She said Facebook “squeezed oxygen” from the tech industry with its practices.

“It also sent a clear message to the industry: Don’t step on Facebook’s turf,” James said. She quoted one tech executive who said they feared “the wrath of Mark,” referring to Zuckerberg.

Antitrust enforcement has been building on nearly all the big tech companies.

In October, the U.S. Justice Department and 11 states sued Google, alleging it had used its enormous size to illegally monopolize the market for search-related advertising. Last month, European authorities accused Amazon of hurting competition by using independent sellers’ data for its own benefit.

Facebook last year agreed to pay $5 billion to the Federal Trade Commission to end an investigation into the company’s privacy practices, a record penalty but one the company’s critics dismissed as meaningless.

The new administration in Washington won’t necessarily give the tech industry a reprieve, either.

Biden said there was an “overwhelming arrogance” in Silicon Valley, and that Facebook’s failure to stop Russian operatives from using its services during the 2016 presidential election was “close to criminal.”