Oregon catches arsonist in the act, lets him out, surprised to find he sets new fires

That's the astonishing picture we have here where a suspect, Domingo Lopez, Jr., 45, who had been arrested just 12 hours earlier for setting fires, got somehow let out and proceeded to commit to more arson, with the Antifa weapon of choice, the Molotov cocktail, as if that couldn't be foreseen. The second time around, he set six fires.

The big fail here was from the justice system, which let the known firebug, freshly caught in the act, out and about. Obviously, there's something going on with this. How could anyone in authority be this stupid?

It's sheer lunacy to let a caught-in-the-act arsonist out at a time of high fires and not guess he'll go back to the same thing he was caught doing earlier. But that's exactly what happened.

According to the Washington Examiner:


The man was released, but police said he then started six more small brush fires early Monday morning along the freeway. "Portland Fire and Rescue extinguished three of them while passing community members put out the other three. All were caught early. No one was injured and no structures were burnt. Officers located Domingo Lopez, Junior walking along the shoulder and arrested him. They seized a lighter as evidence," police said in a statement

There's some kind of disordered logic going on here, whether of the prosecutor or the Portland cops, or the political establishment leading them, the Ted Wheeler crowd. You don't ever let a live arsonist firebug out after he's been caught once in the act, at a time of high, disastrous fires taking out whole towns and creating "mass casualty events," as has been the story in Oregon. The state currently has a million acres on fire, as many as 20 dead, and 40,000 evacuated.

Who came up with the idea of letting this freak out?

And who was surprised that he did what he did? As Nancy Pelosi puts it, "people will do what they do."

Was it because he had a lot of earmarks of Antifa (in his use of Molotov cocktails) that he got let out same as your average Portland rioter/looter? Was it because Oregon is pretty much shutting down its law enforcement mechanisms, based on the rabid hundred-day siege of protests in Portland? (Look at how bush-league the Portland police website is, for one — a sure sign of underfunding right there.) Is it because of some bad new laws regarding bail on the books? At this early stage, I don't know. But something out there is trying to protect Antifa and the orbit of criminals around them with this lunatic act of letting an arsonist out and getting surprised he started more fires.

One thing we do know is that authorities are downplaying the damage the fiend did, saying the fires were small and put out, so we are supposed to think it's no big deal — read the statement of the Portland Police here.
###ORIGINAL MESSAGE BELOW###

A suspect was arrested after using a Molotov Cocktail to start a small brush fire.

On Sunday, September 13, 2020 at 4:35p.m., East Precinct officers were dispatched to assist Portland Fire and Rescue with a brush fire in the 9600 block of East Burnside Street. Officers saw that a section of grass along the I-205 freeway was burning. Firefighters extinguished the fire. No one was injured and no structures were damaged.

About an hour later, East officers were flagged down by a witness who pointed out the suspect in a nearby tent. Officers arrested the suspect, who confirmed he lit the fire with the device.

Officers seized a plastic bottle with a wick as evidence (photos).

Officers booked Domingo Lopez Jr., 45, into the Multnomah County Detention Center on charges of Reckless Burning and Disorderly Conduct in the Second Degree. Arson investigators are also doing follow-up to see if other charges are warranted.

We also know that Facebook is trying to suppress any information about Antifa involvement in these fires. That has a funny smell in light of the fact that the arsonist used Molotov cocktails to set his blazes, the Antifa weapon of choice, instead of just plain matches or cans of gasoline, as ordinary arsonists do. Doesn't everyone have a spare Molotov cocktail on hand?

The Portland cops even posted a photo of it: 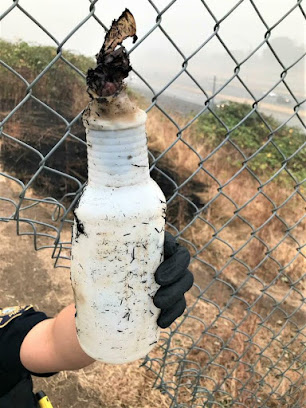 Image credit: Portland Police, Twitter screen shot
Here's the other disturbing detail: he's not the only one. A creep was arrested for arson in Lane County here, and three other firebugs were arrested in Washington and California, suggesting quite possibly some sort of plan. Antifa, remember, said that if it doesn't get what it wants, "cities will burn."

And here's the evidence that the problem is real, because the Oregon residents (not the dolts in Portland who vote blue and hold all the political power) are terrified. CNN reports that some of them have started stopping unfamiliar cars into their towns at gunpoint. CNN tut-tuts the activity, but it's pretty obvious that Oregon's normals are convinced that the authorities aren't about to protect them, and they are scared enough to take matters into their own hands. It's also disturbing that at a time like this, the Oregon fire marshal has resigned for murky reasons, a development that will be sure to hold more revelations, none of them likely to make the leftists running Oregon look good. There's some kind of chaos churning among the leftists running that state, and Antifa and arsonists seem to be protected, which is why they're running wild.

It's almost as if Antifa had a muscular presence in the Portland government or something. Letting this fiend out does not make sense, and Oregon's authorities apparently aren't bothered about looking like fools every time they bow to the forces of lawlessness. There's something worse for them, it seems, than looking like fools.
at September 15, 2020