If a presidential candidate waves at the woods do the woods wave back?

That Said, I want to say this about the potential Biden/Harris or Harris/Biden Administration depending on what each of those two call it at any given press briefing. My focus here surely lines up with the focus of all concerned American Voters who are making plans for America's future.

I speak here of Joe Biden.

Two recent polls (Rasmussen and Zogby) both illustrate that a large percentage of likely voters, including 20% of Democrats, feel Mr. Biden is suffering from early stages of dementia.

After watching the VIDEO of Joe Biden waving at an empty field as he deplanes, you need to realize that he sees what you cannot see. It is sad and it is scary.

CONSIDER THIS.
Should he win, he will be authorized to carry

Its primary purpose is to confirm the president’s identity, and it allows him to communicate with the National Military Command Center in the Pentagon, which monitors worldwide nuclear threats and can order an instant response. The Football also provides the commander in chief with a simplified menu of nuclear strike options—allowing him to decide, for example, whether to destroy all of America’s enemies in one fell swoop or to limit himself to obliterating only Moscow or Pyongyang or Beijing.
If the time comes for such a critical decision to be made what will Joe Biden Do?

If a presidential candidate waves at the woods do the woods wave back?

nuclear football:
The most powerful briefcase in the world

Wherever the US President goes a military aide is only ever a few feet away, carrying a briefcase with the ability to launch the US nuclear arsenal.

The American nuclear “football,” officially known as the Presidential Emergency Satchel, first came into use in the aftermath of the Cuban Missile Crisis. It's understood President John F. Kennedy was worried about the security surrounding the launching of a nuclear weapon.

US security officials created a briefcase that would give the president the means to quickly receive information and authorise a nuclear strike. 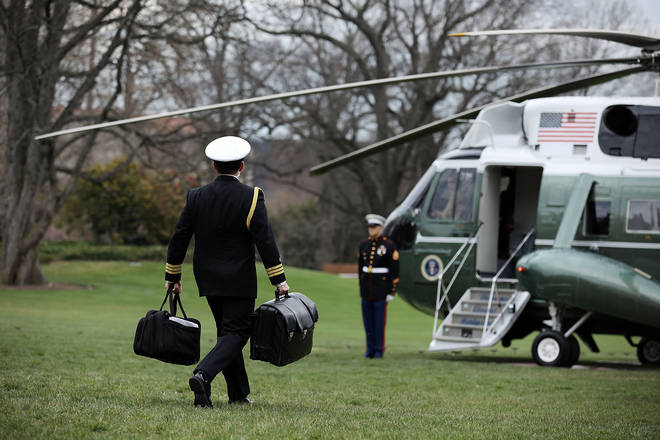 The Football does not actually contain a button for launching a nuclear war. Instead it contains a series of codebooks with commands which can be communicated to the Pentagon.

It is understood the Football also provides the President with a simple menu or pre-planned nuclear strike options, for example allowing him to select a country or city to target.

When a President is sworn into office they are presented with a plastic card which contains the nuclear codes, the card is referred to as "the biscuit," and a nuclear strike cannot be launched without it.
at September 16, 2020