The move is the latest in the Trump administration’s efforts to impose limits on Chinese students. But university officials say the government is paranoid, and that the United States will lose out.
Comment to University Officials:
"This Is Our Country!"
Ron Ernie 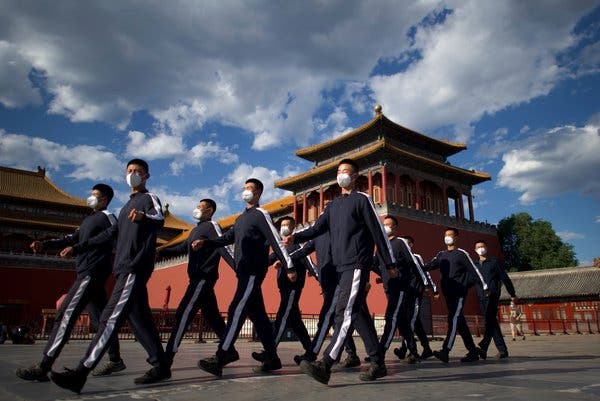 People’s Liberation Army soldiers marching on Wednesday at the entrance of the Forbidden City in Beijing.Credit...Noel Celis/Agence France-Presse — Getty Images


WASHINGTON — The Trump administration plans to cancel the visas of thousands of Chinese graduate students and researchers in the United States who have direct ties to universities affiliated with the People’s Liberation Army, according to American officials with knowledge of the discussions.


The plan would be the first designed to bar the access of a category of Chinese students, who, over all, form the single largest foreign student population in the United States.


It portends possible further educational restrictions, and the Chinese government could retaliate by imposing its own visa or educational bans on Americans. The two nations have already engaged in rounds of retribution over policies involving trade, technology and media access, and relations are at their worst point in decades.


American officials are discussing ways to punish China for its passage of a new national security law intended to enable crackdowns in Hong Kong, but the plans to cancel student visas were under consideration before the crisis over the law, which was announced last week by Chinese officials. Secretary of State Mike Pompeo discussed the visa plans with President Trump on Tuesday in a White House meeting.


American universities are expected to push back against the administration’s move. While international educational exchange is prized for its intellectual value, many schools also rely on full tuition payments from foreign students to help cover costs, especially the large group of students from China.


Administrators and teachers have been briefed in recent years by the F.B.I. and the Justice Department on potential national security threats posed by Chinese students, especially ones working in the sciences. But the university employees are wary of a possible new “red scare” that targets students of a specific national background and that could contribute to anti-Asian racism.


Many of them argue that they have effective security protocols in place, and that having Chinese students be exposed to the liberalizing effects of Western institutions outweighs the risks. Moreover, they say, the Chinese students are experts in their subject fields and bolster American research efforts.


Chinese students and researchers say growing scrutiny from the American government and new official limits on visas would create biases against them, including when they apply for jobs or grants.


The visa cancellation could affect at least 3,000 students, according to some official estimates. That is a tiny percentage of the approximately 360,000 Chinese students in the United States. But some of those affected might be working on important research projects.


The move is certain to ignite public debate. Officials acknowledged there was no direct evidence that pointed to wrongdoing by the students who are about to lose their visas. Instead, suspicions by American officials center on the Chinese universities at which the students trained as undergraduates.


“In China, much more of society is government-controlled or government-affiliated,” said Frank Wu, a law professor who is the incoming president of Queens College. “You can’t function there or have partners from there if you aren’t comfortable with how the system is set up.”


“Targeting only some potential professors, scholars, students and visitors from China is a lower level of stereotyping than banning all,” he added. “But it is still selective, based on national origin.”


The State Department and the National Security Council both declined to comment.

American officials who defend the visa cancellation said the ties to the Chinese military at those schools go far deeper than mere campus recruiting. Instead, in many cases, the Chinese government plays a role in selecting which students from the schools with ties to the military can study abroad, one official said. In some cases, students who are allowed to go overseas are expected to collect information as a condition of having their tuition paid, the official said, declining to reveal specific intelligence on the matter.


Officials did not provide the list of affected schools, but the People’s Liberation Army has ties to military institutions and defense research schools, as well as to seven more traditional universities, many of them prestigious colleges in China with well-funded science and technology programs.


The F.B.I. and the Justice Department have long viewed the military-affiliated schools as a particular problem, believing military officials train some of the graduates in basic espionage techniques and compel them to gather and transmit information to Chinese officers.


While some government officials emphasize the intelligence threat posed by students from military-affiliated universities, others see those Chinese citizens as potential recruits for American spy agencies. Preventing the students from coming to the United States may make it more difficult for the agencies to recruit assets inside the Chinese military.


After completing their graduate work, some students land jobs at prominent technology companies in the United States. That has made some current and former American officials wary that the employees could engage in industrial espionage.


Last year, Senator Richard M. Burr, Republican of North Carolina, who was then the chairman of the Intelligence Committee, predicted the administration would cut the number of visas going to Chinese students, citing the threat of technology theft.


Senator Marco Rubio, Republican of Florida, who now leads the committee, has sent letters to universities in his state warning about ties to the Chinese government.


Mr. Rubio has been pushing schools to cut relations with China’s Thousand Talents program, which has provided funding for American researchers — including Charles M. Lieber, the chairman of Harvard University’s chemistry and chemical biology department, who was arrested by the F.B.I. in January on charges of concealing his financial relationship with the Chinese government.


Asked about the Trump administration’s move to cancel the visas of some Chinese students studying in the United States, Mr. Rubio said he supported “a targeted approach” to make it more difficult for the Chinese Communist Party to exploit the openness of American schools to advance their own military and intelligence abilities.


“The Chinese government too often entraps its own people into service” to the Communist Party and its objectives “in exchange for an education in the U.S.,” Mr. Rubio said, adding that “higher education institutions in America need to be fully aware of this counterintelligence threat.”


Other Republican lawmakers proposed legislation on Wednesday to bar any Chinese citizen from getting a visa for graduate or postgraduate study in science or technology.


In 2018, the State Department began limiting the length of visas to one year, with an option for renewal, for Chinese graduate students working in fields deemed sensitive. Two officials said targeting graduates of the military-linked schools gathered steam after the F.B.I. announced in January that it was seeking a Boston University student who had hidden her affiliation with the People’s Liberation Army when applying for a visa.


F.B.I. officials said the student, Yanqing Ye, had studied at the National University of Defense Technology in China and was commissioned as a lieutenant before enrolling in Boston University’s department of physics, chemistry and biomedical engineering from October 2017 to April 2019.


While in Boston, Lieutenant Ye continued to get assignments from the Chinese military, including “conducting research, assessing United States military websites and sending United States documents and information to China,” according to the F.B.I. wanted poster.


The Justice Department charged Lieutenant Ye, who is believed to be in China, with acting as a foreign agent, visa fraud and false statements.


The vigorous interagency debate over the move to cancel visas has lasted about six months, with science and technology officials generally opposing the action and national security officials supporting it.


The Australian Strategic Policy Institute, a think tank, has researched the Chinese military-affiliated universities, and that has influenced thinking in the American government. A 2018 report called “Picking Flowers, Making Honey” said China was sending students from those universities to Western universities to try to build up its own military technology.


The study suggested that the graduates were targeting the so-called Five Eyes countries that share intelligence: the United States, Canada, Britain, New Zealand and Australia. In many cases, the report said, students hid their military affiliations while seeking work in fields with defense applications, like hypersonics.


Under the current Chinese government, Beijing has aggressively tried to combine military and civilian work on important technology, said American officials and outside researchers. That often includes tapping the expertise of civilian companies and universities.


“To some degree, U.S. concerns are driven by the assessment that Chinese companies and universities seem unlikely to refuse outright or could be compelled to work with the military, whereas their American counterparts often appear more resistant to working on military research,” Elsa B. Kania, an adjunct senior fellow at the Center for a New American Security, wrote in a report last August.


“It is also striking at the same time that some of China’s leading technology companies appear to be less directly engaged in supporting defense initiatives than might be expected relative to their American counterparts,” she added.


United States officials said the fusion policy also entailed sending military-trained students to American universities to try to gain access to technological know-how that would be valuable to China and its defense industry.


The Chinese military has strong ties to a number of schools with an overt military bent, according to the Australian think tank.


Less obvious to the casual observer are the more traditional universities with longstanding ties to the military.