The More Anger at China, the Worse for Biden 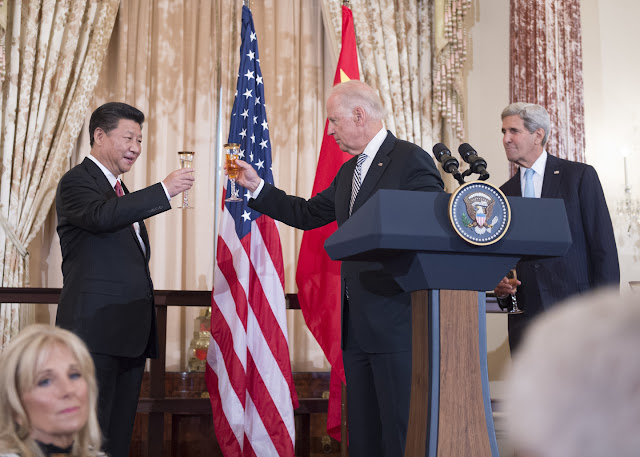 
For months now, it has been clear that Biden family corruption will be a campaign issue. The impeachment focused attention on ties between the vice president’s son, Hunter, and the corrupt Ukrainian oil and gas giant Burisma. But Hunter had equally close, equally profitable ties to Chinese state-owned banks. Those connections were formed when Joe Biden was leading the Obama administration’s policies toward both China and Ukraine.

Cozy, profitable, and possibly corrupt connections with the Chinese government are the last thing Americans want to hear about their politicians right now. Those voters are closeted at home, worried about their future, thanks to a virus that originated in Wuhan. They are mad as hell at Beijing for hiding what it knew, early on, about the pandemic. The Chinese Communist Party knew something terrible was happening, and it refused to share honest information about it. It denied the virus could be spread by human contact, weeks after it knew patients were infecting health care workers, and it hid vital information about the origins and genetic structure of the virus. The World Health Organization spread that misinformation. Beijing’s deception cost lives and livelihoods. Americans are reminded of it every day they are home from work or school under quarantine.

This anger at China’s rulers is bad news for Joe Biden. Voters see China as a rising threat and its economic gains as coming out of American pockets. The Trump campaign was already pushing these issues. It won’t have any trouble tying them to Joe Biden and making his family the face of American elites who profit from their insider positions.

Beyond corruption, China poses important policy dilemmas for the presumptive Democratic presidential nominee. He has long been associated with cooperative, friendly policies toward China, seeing it mainly as a trade partner. Like many in Washington, he saw its economic growth as a net benefit—we can all get rich together—that outweighed national security concerns or job losses. Until recently, Biden was still saying China was hardly worth considering as an economic rival. As he put it during a 2019 campaign stop in Iowa:

"China is going to eat our lunch? Come on, man. They can't even figure out how to deal with the fact that they have this great division between the China Sea and the mountains in the West. They can't figure out how they’re going to deal with the corruption that exists within the system. They’re not bad folks, folks. … They’re not competition for us."

Biden was quickly forced to backtrack. But his words are on tape and he’ll surely hear them replayed in ads this fall. He’ll also hear his attack on Trump as “xenophobic” for banning travel from China to limit the COVID-19 pandemic. Two months later, Biden took it all back. Too late.

Vulnerable as Biden is on these comments, the former vice president is even more exposed on how China affects U.S. national security. Voters increasingly consider China a malevolent and menacing adversary. That doesn’t mean either side wants war. It does mean Americans are increasingly skeptical of accommodation and appeasement, which has been Washington’s basic policy since 1972. That policy has intensified since the early 1990s, when the Clinton and George W. Bush administrations helped China join the World Trade Organization. President Trump is adamant about reversing those policies, which were pursued by successive Democratic and Republican administrations.

When the U.S. and Europe welcomed China into the WTO, they convinced themselves into believing that Beijing would play by the rules and open a huge internal market to Western firms. Ideally, China would also begin liberalizing politically and edge toward democracy. All wrong, except for the huge internal market. China is becoming more dictatorial, not more democratic. It is stealing intellectual property on a massive scale. The internal market has grown massively, but foreign access to it has been carefully regulated and accompanied by coercive demands for self-censorship, technology transfers, and local partnerships at discount prices. Foreign investors are open to predation, unprotected by the rule of law. By contrast, Chinese firms that invest in America, including state-owned firms, have broad access to the domestic market, as well as legal protection. Trump is clamping down on that access as he reshapes policy toward Beijing.

Joe Biden is not responsible for these long-standing American policies, but he is closely associated with them. He championed them for years. The Trump campaign will make sure voters know it. They will imply, rightly, that China would prefer to deal with a pliant President Biden than a battle-hardened Trump. Those are powerful arguments in Midwestern swing states, where manufacturing employment has declined sharply. Many voters blame the losses on outsourcing to China, Mexico, and other low-cost sources.

That blame is exaggerated, as is Trump’s argument. Manufacturing employment declined mainly because of automation. Better trade deals can ameliorate the losses but not reverse them. Still, many American jobs were lost to countries with low labor costs and easy access to the U.S. market, thanks to the WTO and trade deals such as NAFTA. That access would have grown still further under the Trans-Pacific Partnership, another deal backed by Biden and the Obama administration.

Candidate Trump made opposition to these “bad trade deals” the centerpiece of his economic argument in 2016. He killed the TPP as soon as he was inaugurated, drastically renegotiated the deals with Mexico and Canada, and concluded the first phase of a new deal with China. He’ll paint Biden as an elitist opponent on all of them, clueless or indifferent to their impact on American workers. It’s unclear what Biden’s response will be, though his friendly “ordinary guy” persona makes it hard to portray him as elitist. He seems more Budweiser than Bordeaux.

Trump would have gladly run against Biden’s trade policies even if American relations with China were friendly and the former veep childless. Why not? He ran successfully on those issues against Hillary Clinton. But deteriorating relations with China and Hunter’s financial ties to Beijing give Donald Trump powerful new ammunition. He won’t be shy about using it.


Charles Lipson is the Peter B. Ritzma Professor of Political Science Emeritus at the University of Chicago, where he founded the Program on International Politics, Economics, and Security. He can be reached at charles.lipson@gmail.com.
at April 20, 2020