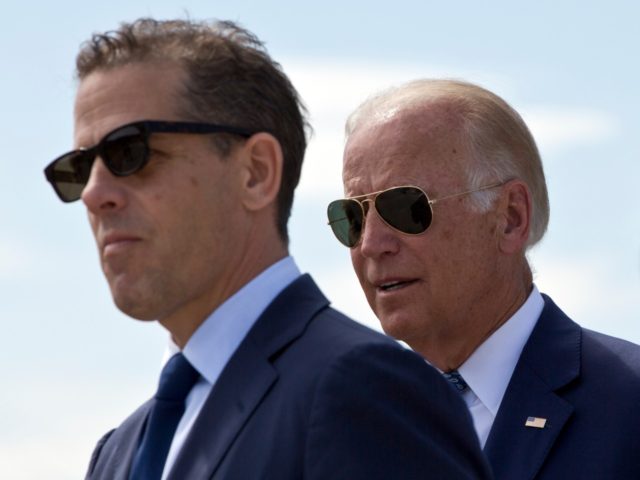 
President Donald Trump’s campaign will continue to press for answers to questions about former Vice President Joe Biden and his son Hunter’s dealings in Ukraine, according to officials

The campaign echoed President Donald Trump’s assertion on Wednesday that he would continue to challenge the Biden family over their corruption in Ukraine.

“That will be a major issue in the campaign,” Trump told Fox News host Sean Hannity on Wednesday night. “I will bring that up all the time because I don’t see any way out.”

“The Vice President was the lead US official on Ukrainian affairs at the same time his son had a sweetheart deal for a Ukrainian energy company when he had no applicable experience,” Perrine added. “The question remains — Where’s Hunter?”
The revelations about Hunter Biden are detailed in Profiles in Corruption: Abuse of Power by America’s Progressive Elite — a book by Peter Schweizer, a senior contributor at Breitbart News and president of the Government Accountability Institute.

Trump first started questioning Hunter Biden’s location and corrupt dealings in Ukraine and China in the Fall of 2019.

“Where’s Hunter?” Trump asked at a rally on October 10 in Minnesota. “Where is he?”

At the time, Trump began challenging the media for failing to question Biden and his son about his corrupt dealings overseas.

On Thursday morning, Biden said that the president’s attacks only verified his belief that Trump was worried about facing him in a general election matchup.

“Have you ever, ever seen a sitting president get so involved in a Democratic primary and focus so much attention on not wanting a single person, me, becoming the nominee?” he asked on the NBC’s Today show.


Biden asserted that Trump “risked his presidency” by suggesting that Ukrainian officials investigate him and his son’s dealings in Ukraine.

But Trump said Wednesday there were still unanswered questions about that.

“I don’t see how they can answer those questions. And maybe they can. I hope they can,” he said.

Sen. Ron Johnson confirmed Wednesday that his office was preparing to release a report on the investigations that Senate Republicans have conducted on the Bidens and their dealings in Ukraine.

“It’s not our fault that Joe Biden, Hunter Biden got wrapped up in the whole Ukrainian story,” he said in an interview on Fox News. “We are not closing our eyes to this.” 2020 ElectionPoliticsDonald TrumpErin PerrineHunter BidenJoe BidenSen Ron Johns
at March 06, 2020