The Man Of Letters


Being A Mail Carrier 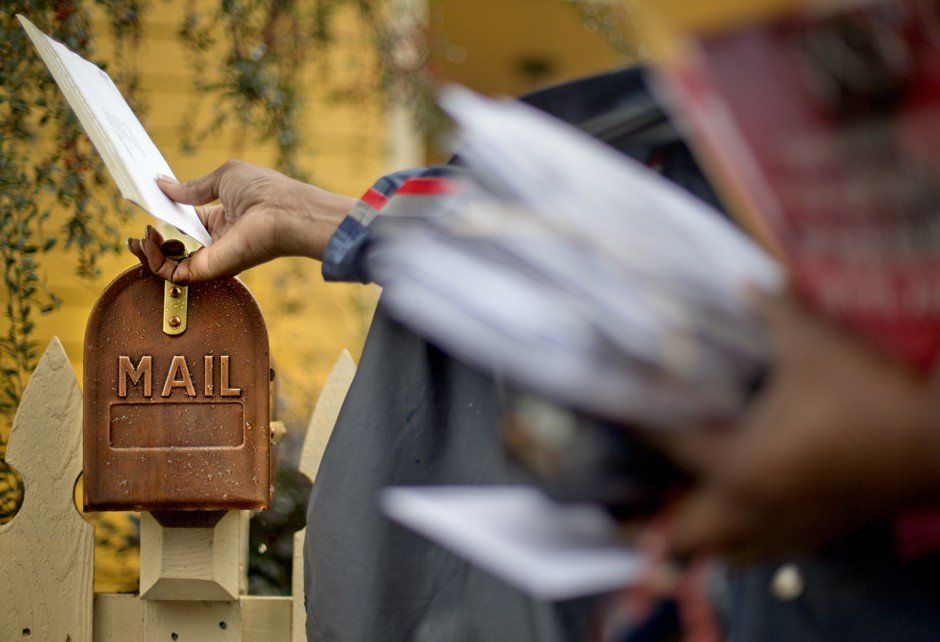 My fourth day delivering mail for the U.S. Postal Service, it snowed-one of those heavy, wet, spring-in-Colorado snows that knocks down tree branches and crushes newly-bloomed tulips. I was training with a veteran letter carrier on a walk-out route, the type where the carrier pushes a blue buggy full of mail and small packages. It’s a lot harder, I discovered, to push that thing through slush.

I schlepped my disheveled, wet self into downtown businesses where concerned secretaries took pity on me as I handed them their soaked mail.

Welcome to the Postal Service.

“Neither snow nor rain, nor heat, nor gloom of night ...” that’s how the saying goes right?

The rude welcome to the Postal Service quickly taught me mail delivery is no leisurely stroll through the neighborhood, dismantling the idyllic image of a smiling Mr. McFeeley handing out birthday cards in “Mister Rogers’ Neighborhood.” My first week on the job, I lost 5 pounds.

Being a mail carrier is hard.

I’d eventually get used to the physical rigors of the job and learn the rhythms, tricks and routines of delivering mail, but what surprised me the most over the next 15 months working on the front lines of this vast, imperfect, but essential big-government institution is how the Postal Service delivers much more than just letters, magazines and Amazon packages to a neighborhood.

I met elderly residents who lived alone and just wanted someone to talk to for a couple minutes a day. I saw how critical the Postal Service is for local businesses, like the one that ships dozens of Priority Mail boxes of custom-made zippers for wedding gowns across the country every day. I met strangers willing to donate grocery bags full of food during the long-running Letter Carriers’ Stamp Out Hunger Food Drive, which tallied 71.6 million pounds of found collected nationwide. I learned the value of a powerful union and experienced the most diverse workplace I’ve ever encountered. And most importantly, what I found while roving from house to house on foot was an intimate insight into my community and fellow Americans.

Like many who come to work for the Postal Service, I didn’t find my way into the USPS because I had burning desire to deliver mail; I just needed a job. A laid-off journalist, I’d spent six months striking out on landing a writing gig and grew tired of the soul-sucking grind that is job searching. An old college friend was working happily delivering mail, and making more than I ever did in newspapering: The benefits are good, you don’t take the job home with you, and there’s lots of overtime if you want it.

And the USPS is nearly always hiring, especially in metro areas in advance of the holiday shopping season. At the time I was job-hunting, Colorado’s Front Range, which includes Denver, Boulder, and Fort Collins, is was short more than 500 positions. The hiring process is long—I applied in mid-February and didn’t start until May—and includes two exams, a personality assessment, and the 473 Postal Exam, which tests your ability to check addresses for errors, accurately fill out forms, and memorize and recall lists of street addresses. I had to also pass a drug test (that’s the biggest hurdle to hiring in weed-legal Colorado, the Fort Collins Postmaster told me) and an exhaustive background check. Then it was off to city carrier academy, where veteran carriers taught my fellow classmates and me the tricks of organizing and carrying mail and how to drive the postal vehicles. We each got a navy blue USPS hat and T-shirt and were sent to our respective post offices to begin our postal careers; I was now a USPS employee, working as a city carrier assistant.

In the evenings I’d continue my search for a Plan B career after journalism, but for the other 8-to-10 hours a day (and up to 12 during holiday season) I’d deliver mail and packages to residents of Fort Collins, Colorado.

A lot of packages.

Receive an Instant Pot for Christmas? Yeah, so did your neighbor. My record was 18 delivered in one day—we saw that craze coming on well before Black Friday.

The old-timers at my office remember the days they’d deliver, five, maybe, 10 packages a day. Now it’s more like 50 or 60 a day, from 40-pound bags of dog food (a particular pain in the ass) to furniture and food-in-a-box meal kits. The Postal Service wasn’t really built for the Amazon era: Our (badly outdated) vehicles don’t have enough space to house them, and few have shelves, leaving carriers to play an Amazon box-sized game of Jenga every day.

(Sidenote on those trucks, called LLVs, or Long Life Vehicles: Most are about 30 years old, with that many years of cigarette smoke soaked into the seats; they lack airbags or air conditioning, and the heaters are less than effective. The USPS is facing a major budget challenge because it needs to replace up to 180,000 of these elderly machines over the next several years, which is going to cost more than $6 billion.)

Every Sunday we’d fill our LLVs with 100 to 175 Amazon packages, thanks to USPS’ exclusive contract with the e-commerce giant—that’s the one that the president keeps objecting to, though it’s been a revenue source for the cash-strapped service. And, no fail, every Sunday, customers would ask why I was working and I’d jokingly (is it a joke, though?) tell them “Because Amazon is taking over the world.”

“You bringing me a check today?”

“You can keep the bills.”

“This one better be a winner!” (I had no idea Publisher’s Clearing House was still a thing, but it is, especially in low-income and senior-living communities.)

No one is ever upset to see their mail carrier, you know? This was so foreign to me, as a journalist who was used to being less warmly received. And while predictable and routine and mostly about the weather, I loved these little conversations with residents along my route.

When kids saw me driving around the corner, they’d drop their ballgame and race me down the sidewalk. Others were excited to see me because I was about to be a lucky customer at their lemonade stand. At the retirement home, residents greeted me every day at the wall of mailboxes; if I’d show up five minutes early or five minutes late, they’d jokingly let me have it. “You know, Sue is usually here by 3:30!”

Residents learned my name, and more importantly I learned the intricacies of their neighborhoods. A fellow carrier, a Fort Collins native and Mexican American, proudly showed me his home that’s part of the historically Hispanic neighborhood that I had never taken the time to properly explore and experience on foot. I learned from longtime residents how they felt about the gentrification happening in pockets of Fort Collins. This booming college town has outgrown its farming and ranching roots and is transforming into a progressive tech hub, known for its breweries and affinity for bike lanes, coffee shops, and high-priced boutiques.

Delivering the mail gives you a granular insight into America’s growing cultural, political, and wealth divide. North of town, there’s a senior-living mobile home community sitting in the shadow of newly-built eco-friendly condos that sell for half a million dollars. Residents at the condos subscribe to The Atlantic and New Yorker; residents in the trailer park a few hundred feet away get People and National Enquirer.

After several months, the rhythms of carrying mail became second nature; I’d successfully carried nearly every one of the office’s 50 routes around the city. I also became familiar with the downsides of the job. As one might expect at a financially beleaguered organization that’s been losing money for more than a decade, office morale was often low: Nearly every week, there’d be a shouting match between carriers complaining about mail arriving late to the office, thus delaying and extending their day, and management only shrugging their shoulders and saying that’s an issue out of their control. Clerks, whose duties include working the front desk helping customers and sorting mail and packages (sometimes overnight), were brutally overworked, often clocking 60- to 70-hour weeks. Many of my coworkers felt trapped: Sure, the job sucked sometimes, but where else can you find a secure job that pays as well?

It was my relationships with fellow carriers and clerks—a diverse group, from first-generation Americans to military veterans—that made the job bearable most days. But once I landed a long-sought communications gig, I made the decision to move on from the USPS.

After I shared my Postal Service experience in a thread on Twitter that went semi-viral, I received dozens of comments from readers who shared their nostalgia and affection for this beloved and embattled American institution. One told me about a mail carrier who heard a smoke alarm going off in an empty house and alerted a neighbor. Others were children of postal workers, grateful for the livelihoods that the jobs provided. “Both my parents retired from the post office,” one reader told me. “My mom started when she was just 19 years old. It’s not what it used to be…. They work the new folks into the ground, so I hear. I try to tip my carrier well for dealing with the BS.”

The response made me even more proud of my time wearing the blue uniform; I’m more deeply connected to my community and have a better understanding of my fellow Americans. From now on, I’ll tip my mail carrier well. You should, too.


Stephen Meyers worked as a mail carrier for the United States Postal Service in 2017 and 2018. His writing has appeared in USA Today and newspapers in Colorado and Idah
o.
at March 31, 2020