Republicans lean into Biden probe as he surges in Democratic primary 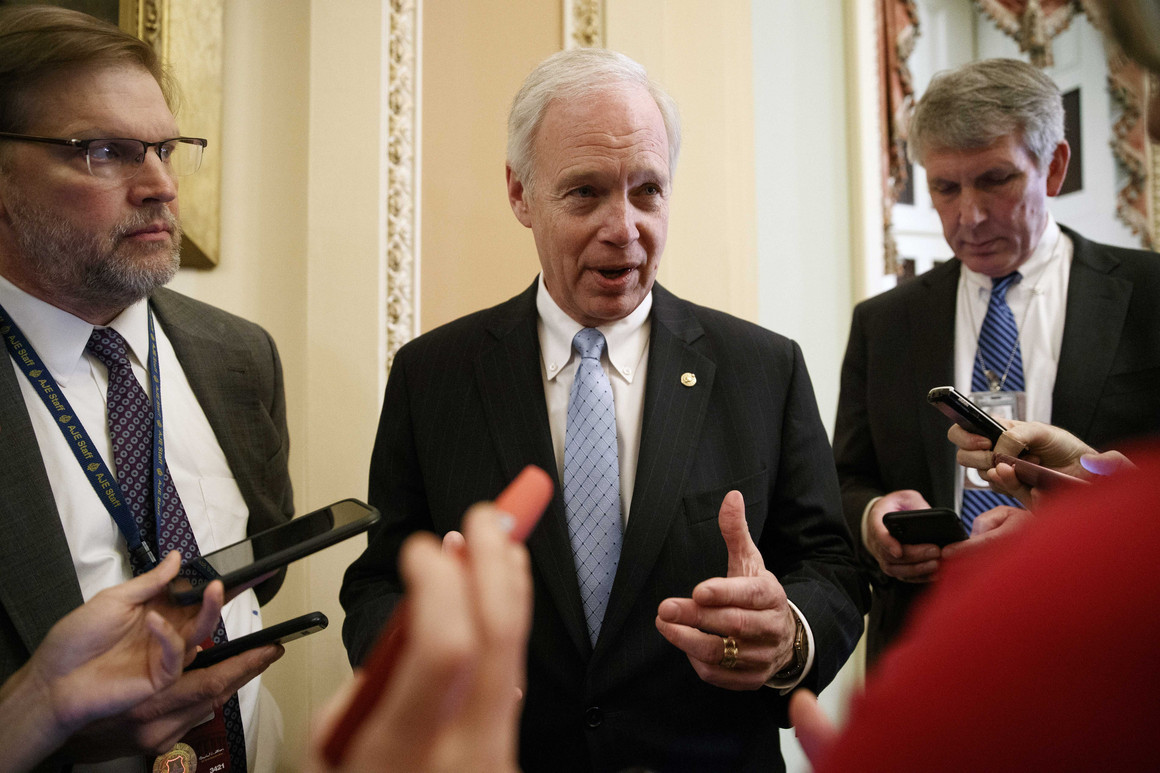 Sen. Ron Johnson insisted that the timing of his probe into Hunter Biden’s ties to the Ukrainian gas company Burisma has nothing to do with the election calendar. | Jacquelyn Martin/AP Photo


Just hours after Joe Biden surged to the top of the Democratic presidential pack, Senate Republicans announced a new phase of their investigation targeting the former vice president and his son Hunter.

Senate Homeland Security Committee Chairman Ron Johnson (R-Wis.) told reporters on Wednesday that he is likely to release an interim report within one to two months on his panel’s probe of Hunter Biden’s ties to a Ukrainian gas company, Burisma.

“These are questions that Joe Biden has not adequately answered,” Johnson said. “And if I were a Democrat primary voter, I’d want these questions satisfactorily answered before I cast my final vote.”


Johnson insisted that the timing of his probe has nothing to do with the election calendar. But the renewed focus on Biden, coinciding with his surge to frontrunner status, has alarmed House Democrats as they brace for an all-out GOP assault on Biden and his son over an issue that was litigated at length during President Donald Trump's impeachment trial.

Democrats are now warily eyeing Trump’s Twitter feed — and his Republican allies in the Senate like Johnson — for the return of the widely discredited corruption charges against Biden that had seemed to fade from consciousness along with Biden’s flagging campaign. But after Biden’s Super Tuesday romp, the Democrats who led the impeachment drive against Trump for his efforts to get Ukraine to investigate the Bidens are preparing for Burisma to make a return to the GOP playbook.

“After hearing nothing about Burisma over the course of the last couple weeks, the Republicans will revive it in a perfect demonstration of what this means to them, which is to be a cudgel to beat Joe Biden with,” said Rep. Jim Himes (D-Conn.), a member of the House Intelligence Committee.

House Democrats are gearing up to charge Republicans who probe the Burisma matter with aiding a potential Russian disinformation campaign. Democrats raised alarms last year when reports, citing a third-party security firm, indicated Burisma had been hacked by Russian military operatives using tactics similar to those used to infiltrate the Democratic National Committee in 2016.

“I am concerned to see that in the Senate there seems to be a renewed interest in furthering these bogus Russian narratives through the use of their investigative powers,” said House Intelligence Committee Chairman Adam Schiff (D-Calif.). “I just think it’s so deeply destructive to be effectively working in a concert with Russian propaganda artists.”

Schiff said he would use his perch on the committee to call out adversaries for “furthering Kremlin narratives.”

It's unclear whether House Intelligence Committee members were ever given official confirmation by intelligence officials that the Burisma hack occurred, and several members of the panel said they could neither confirm nor deny whether they had been briefed on the matter.

Yet Johnson contends that his plans have nothing to do with Biden’s 2020 pursuit.

Johnson’s current posture marks a sharp departure from his position in 2016 when he and a bipartisan team of senators signed a letter supporting Biden’s efforts in Ukraine to crack down on corrupt prosecutor Viktor Shokin.

"Senator Johnson just accidentally did us an enormous favor by explicitly admitting that he is abusing congressional authority in a manner that would make the founding fathers spin in their graves,” Biden’s campaign spokesman Andrew Bates said in a statement Wednesday.

Yet the timing has raised protests from Democrats. On Monday, two days after Biden's South Carolina win, Johnson announced plans to subpoena records from a Democratic public affairs firm which, according to Johnson, “sought to leverage Hunter Biden’s role as a board member of Burisma to gain access to, and potentially influence matters at, the State Department.” Johnson revealed Wednesday that his committee will vote on the subpoena next week.

Johnson's Homeland Security panel, which has been working with the Senate Finance Committee to pursue allegations surrounding Ukraine’s role in the 2016 U.S. election, is also ramping up its investigative work.

“I don’t know why any member of my committee would vote against a subpoena that’s just looking for records from a U.S. consulting firm,” Johnson said.

Michigan Sen. Gary Peters, Johnson’s Democratic counterpart on the committee, opposes the broader investigation and the subpoena, which prompted Johnson to schedule a committee meeting to vote on it. But even some of Johnson’s fellow Republicans don’t appear to be on the same page. Senate Intelligence Committee Chairman Richard Burr (R-N.C.) met with Johnson and Sen. Chuck Grassley (R-Iowa), the Finance Committee chairman, in December to warn them that their investigation could aid Russian intelligence, POLITICO previously reported.

And on Wednesday, Burr declined to answer reporters’ questions about the Burisma probe.

“I don’t get into what his staff works on,” Burr said. When asked about concerns that the information the committee receives could be discredited Russian material, Burr replied: “They’ve got to explore the issues that they think are important to them.”
at March 04, 2020