In a quiet little town at an unknown deli mart, Rags walked in for his daily pick pocketing agenda.  He daily visited this tired little gas station in Poughkeepsie, N.Y., to make a few bucks stealing customer's (what few came in) wallets and splitting the cash found in them with the
'CRACK' CASHIER NAMED CHRIS.
But on this particular day he chose a member of the local law enforcement deparetment to hit on.

Detective Sargent Justin Case strolled into the station looking to satisfy his nicotine fit, all crass looking, as if he believed he was the biggest and baddest boy in town.
Justin Case was not bad, he wasn't even very big.  He is, by all respects a whimpering whining cop numbskull.

Word around has it that the worst five years of his life were spent in kindergarten.

Today though, Justin Case was to meet his match.  Rags an 85 year old veteran of the Korean War, who makes daily stops at the lonely, no business to speak of deli mart,  will show Justin Case who the boss is.
Detective Justin Case approaches the counter and with a stern voice demands a pack of Marlboro Red Shorts
.
He gets no response from Crack Cashier Chris.

Justin Case slams his 38 special down on the counter.  It goes off blowing a hole in the condom display.
The powerfully loud explosive gunshot caused Chris's eyes to pop full open from his nap.
"Wha Wha What Was That?" Yells Chris.
Detective Justin Case Replies,
"Shut your face dirt bag and gimme a damned pack of Marlboro smokes ya hear; are ya deaf or somethin?" Chris throws the cigarettes down on the counter like some sort of punk wild west Dodge City Bar Keep.  "Boy says Justin Case, you aint got balls enough to do that again  unless you like being pistol whipped with the butt of a 38 dude!"
Being the thick head he is, Chris picks up those Marlboros and crashes them back down onto the counter again instantly realizing too late that he should have never done that.  Detective Justin Case Raises His 38 and begins lunging and swiping at Chris.  Chris hollers "No No No...please don't hurt me....PLEASE?  I'LL DO ANYTHING!"
"Anything? Justin Case pleasingly replies.  Did you say you will do anything?"
"Oh OH No...CHRIS SAYS HORRIFIED,

Please not that again please do not make me put that in my mouth.  I cannot do it I still have a bad taste in my mouth from the last time."
Justin Case's Retort is furiously final.

Do It Or I Beat Your Head In Dude!"
Chris resigns himself and tilts his head back with the help of one of Justin Case's hands gripping a nap of Chris's hair.
Then with his free hand Justin Case reaches somewhere in his pants.
He pulls out a red hot FIREBALL and shoves in in Chris's mouth.
"There ya go dirt bag, suck on that and burn your little sissy tongue off!"
Chris chomps down the Ferarra Atomic Fireball
in noticeable distasteful fashion.
He swallows it down and remarks;
"Hey these ain't as big or as hot as they used to be."
Detective Justin Case says
"Ya they ain't like the original Ferarra Atomic Fireballs.
Probably made by some candy ass company!"
Little known to both Chris and Detective Justin Case, RAGS the 85 year old Korean War veteran and class act pick pocket, was working his trade skills.  As Chris and Detective Justin Case were interacting their moronic drama,
RAGS was making hay while the sun shines. 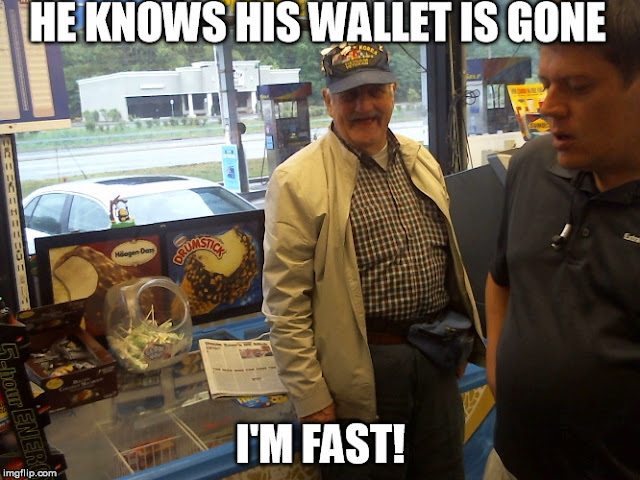 The Picture above should explain what skill RAGS possesses and what a sudden shock faced Detective Justin Case looks like.
(notice Rag's little belt purse)
lots of wallets in There!