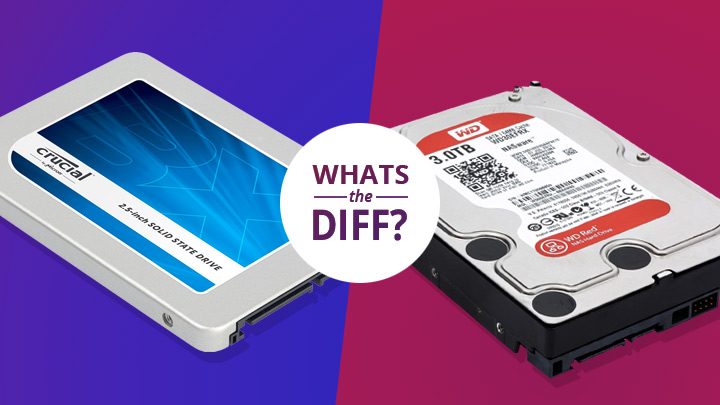 HDDs and SSDs have changed in the two years since Peter Cohen wrote the original version of this post on March 8 of 2016. We thought it was time for an update. We hope you enjoy it.

In This Corner: The Hard Disk Drive (HDD)

The traditional spinning hard drive has been a standard for many generations of personal computers. Constantly improving technology has enabled hard drive makers to pack more storage capacity than ever, at a cost per gigabyte that still makes hard drives the best bang for the buck. 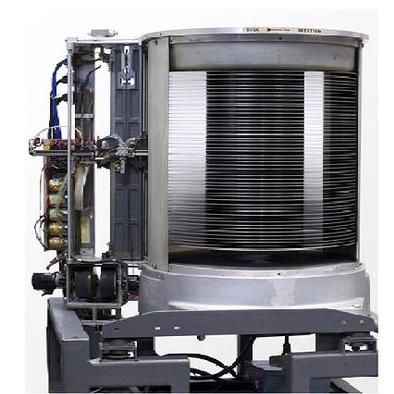 As sophisticated as they’ve become, hard drives have been around since 1956. The ones back then were two feet across and could store only a few megabytes of information, but technology has improved to the point where you can cram 10 terabytes into something about the same size as a kitchen sponge.
Inside a hard drive is something that looks more than a bit like an old record player: There’s a platter, or stacked platters, which spin around a central axis — a spindle — typically at about 5,400 to 7,200 revolutions per minute. Some hard drives built for performance work faster. 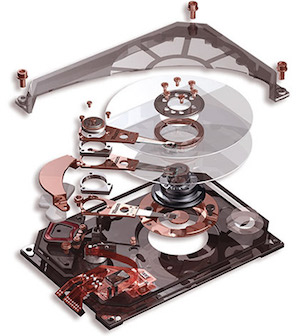 Information is written to and read from the drive by changing the magnetic fields on those spinning platters using an armature called a read-write head. Visually, it looks a bit like the arm of a record player, but instead of being equipped with a needle that runs in a physical groove on the record, the read-write head hovers slightly above the physical surface of the disk.

Proven technology that’s been in use for decades makes hard disk drives cheap — much cheaper, per gigabyte than solid state drives. HDD storage can run as low as three cents per gigabyte. You don’t spend a lot but you get lots of space. HDD makers continue to improve storage capacity while keeping costs low, so HDDs remain the choice of anyone looking for a lot of storage without spending a lot of money.

HDD technology isn’t standing still, and price per unit stored has decreased dramatically. As we said in our post, HDD vs SSD: What Does the Future for Storage Hold? — Part 2, the cost per gigabyte for HDDs has decreased by two billion times in about 60 years.

HDD manufacturers have made dramatic advances in technology to keep storing more and more information on HD platters — referred to as areal density. As HDD manufacturers try to outdo each other, consumers have benefited from larger and larger drive sizes. One technique is to replace the air in drives with helium, which reduces reduces friction and supports greater areal density. Another technology that should be available soon uses heat-assisted magnetic recording (HAMR). HAMR records magnetically using laser-thermal assistance that ultimately could lead to a 20 terabyte drive by 2019. See our post on HAMR by Seagate’s CTO Mark Re, What is HAMR and How Does It Enable the High-Capacity Needs of the Future?

The continued competition and race to put more and more storage in the same familiar 3.5” HDD form factor means that it will be a relatively small, very high capacity choice for storage for many years to come.
In the Opposite Corner: The Solid State Drive (SSD)

Solid State Drives (SSDs) have become much more common in recent years. They’re standard issue across Apple’s laptop line, for example the MacBook, MacBook Pro and MacBook Air all come standard with SSDs. So does the Mac Pro. 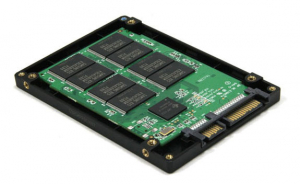 Solid state is industry shorthand for an integrated circuit, and that’s the key difference between an SSD and a HDD: there are no moving parts inside an SSD. Rather than using disks, motors and read/write heads, SSDs use flash memory instead — that is, computer chips that retain their information even when the power is turned off.
SSDs work in principle the same way the storage on your smartphone or tablet works. But the SSDs you find in today’s Macs and PCs work faster than the storage in your mobile device.

The mechanical nature of HDDs limits their overall performance. Hard drive makers work tirelessly to improve data transfer speeds and reduce latency and idle time, but there’s a finite amount they can do. SSDs provide a huge performance advantage over hard drives — they’re faster to start up, faster to shut down, and faster to transfer data.
A Range of SSD Form Factors

SSDs can be made smaller and use less power than hard drives. They also don’t make noise, and can be more reliable because they’re not mechanical. As a result, computers designed to use SSDs can be smaller, thinner, lighter and last much longer on a single battery charge than computers that use hard drives. 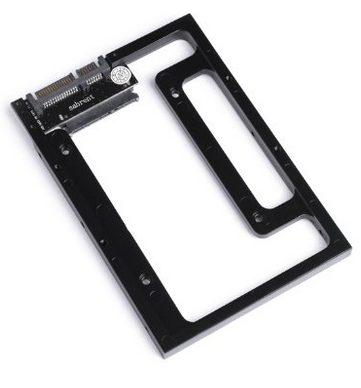 Many SSD makers produce SSD mechanisms that are designed to be plug-and-play drop-in replacements for 2.5-inch and 3.5-inch hard disk drives because there are millions of existing computers (and many new computers still made with hard drives) that can benefit from the change. They’re equipped with the same SATA interface and power connector you might find on a hard drive. 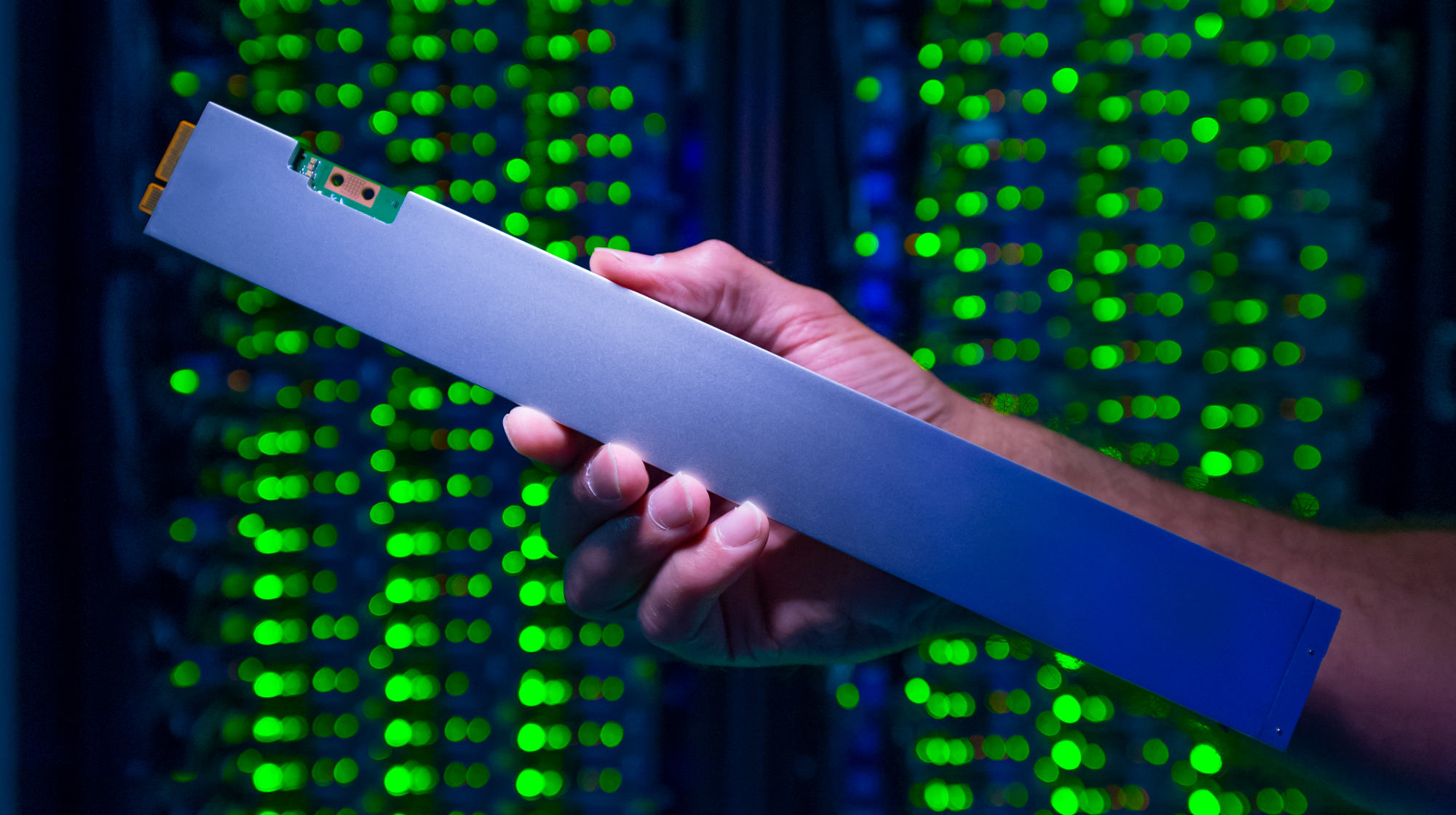 A wide range of SSD form factors are now available. Memory Sticks, once limited to 128MB maximum, now come in versions as large as 2 TB. They are used primarily in mobile devices where size and density are primary factor, such as cameras, phones, drones, and so forth. Other high density form factors are designed for data center applications, such as Intel’s 32 TB P4500. Resembling a standard 12-inch ruler, the Intel SSD DC P4500 has a 32 terabyte capacity. Stacking 64 extremely thin layers of 3D NAND, the P4500 is currently the world’s densest solid state drive. The price is not yet available, but given that the DC P4500 SSD requires only one-tenth the power and just one-twentieth the space of traditional hard disk storage, once the price comes out of the stratosphere you can be sure that there will be a market for it. 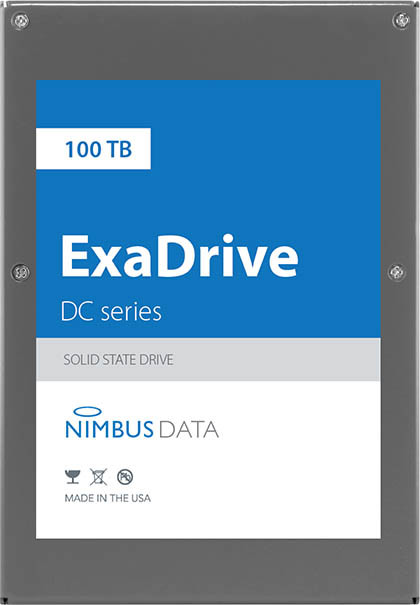 Earlier this year, Nimbus Data announced the ExaDrive D100 100TB SSD. This SSD by itself holds over twice as much data as Backblaze’s first Storage Pods. Nimbus Data has said that the drive will have pricing comparable to other business-grade SSDs “on a per terabyte basis.” That likely means a price in the tens of thousands of dollars.
SSD drive manufacturers also are chasing ways to store more data in ever smaller form factors and at greater speeds. The familiar SSD drive that looks like a 2.5” HDD drive is starting to become less common. Given the very high speeds that data can be read and copied to the memory chips inside SSDs, it’s natural that computer and storage designers want to take full advantage of that capability. Increasingly, storage is plugging directly into the computer’s system board, and in the process taking on new shapes. 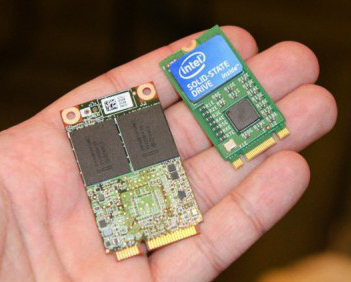 A size comparison of an mSATA SSD (left) and an M.2 2242 SSD (right)
Laptop makers adopted the mSATA, and then the M.2 standard, which can be as small as a few squares of chocolate but have the same capacity as any 2.5” SATA SSD.

Another interface technology called NvM Express or NVMe may start to move from servers in the data center to consumer laptops in the next few years. NVMe will push storage speeds in laptops and workstations even higher.
SSDs Fail Too

Just like hard drives, SSDs can wear out, though for different reasons. With hard drives, it’s often just the mechanical reality of a spinning motor that wears down over time. Although there are no moving parts inside an SSD, each memory bank has a finite life expectancy — a limit on the number of times it can be written to and read from before it stops working. Logic built into the drives tries to dynamically manage these operations to minimize problems and extend its life.

For practical purposes, most of us don’t need to worry about SSD longevity. An SSD you put in your computer today will likely outlast the computer. But it’s sobering to remember that even though SSDs are inherently more rugged than hard drives, they’re still prone to the same laws of entropy as everything else in the universe.
Planning for the Future of Storage

If you’re still using a computer with a SATA hard drive, you can see a huge performance increase by switching to an SSD. What’s more, the cost of SSDs has dropped dramatically over the course of the past couple of years, so it’s less expensive than ever to do this sort of upgrade.

Whether you’re using a HDD or an SSD, a good backup plan is essential because eventually any drive will fail. You should have a local backup combined with secure cloud-based backup like Backblaze, which satisfies the 3-2-1 backup strategy. To help get started, make sure to check out our Backup Guide.

Hopefully, we’ve given you some insight about HDDs and SSDs. And as always, we encourage your questions and comments, so fire away!
at March 31, 2020