Trump, looking to 'shake up the Dems a little bit,' hits 'mumbling' Pelosi in rally ahead of key NH primary


By
Gregg Re
Fox News

President Trump said he was looking to get under Democrats' skin Monday with a rally in New Hampshire on the eve of the state's first-in-the-nation primaries, and he wasted little time -- quickly reliving his dramatic State of the Union speech with a thinly veiled shot at House Speaker Nancy Pelosi, D-Calif.

"I had somebody behind me who was mumbling terribly," Trump mused, as chants of "Lock her up!" broke out.

"Very distracting. Very distracting," Trump continued. "I'm speaking, and a woman is mumbling terribly behind me. There was a little anger back there. We're the ones who should be angry, not them."

Trump sped through his remarks to attendees unusually quickly, so that he could head to Dover Air Force base in Delaware late Monday night to participate in the dignified transfer of the remains of two soldiers killed recently in Afghanistan.

Before he departed the rally, the president made sure to thank Pelosi for giving Republicans the highest poll numbers they've "ever" had -- or at least since 2005, according to a recent Gallup survey. Pelosi, who ripped up Trump's State of the Union address as soon as it concluded, was widely criticized especially after videos emerged showing she had visibly torn some of the pages in advance. 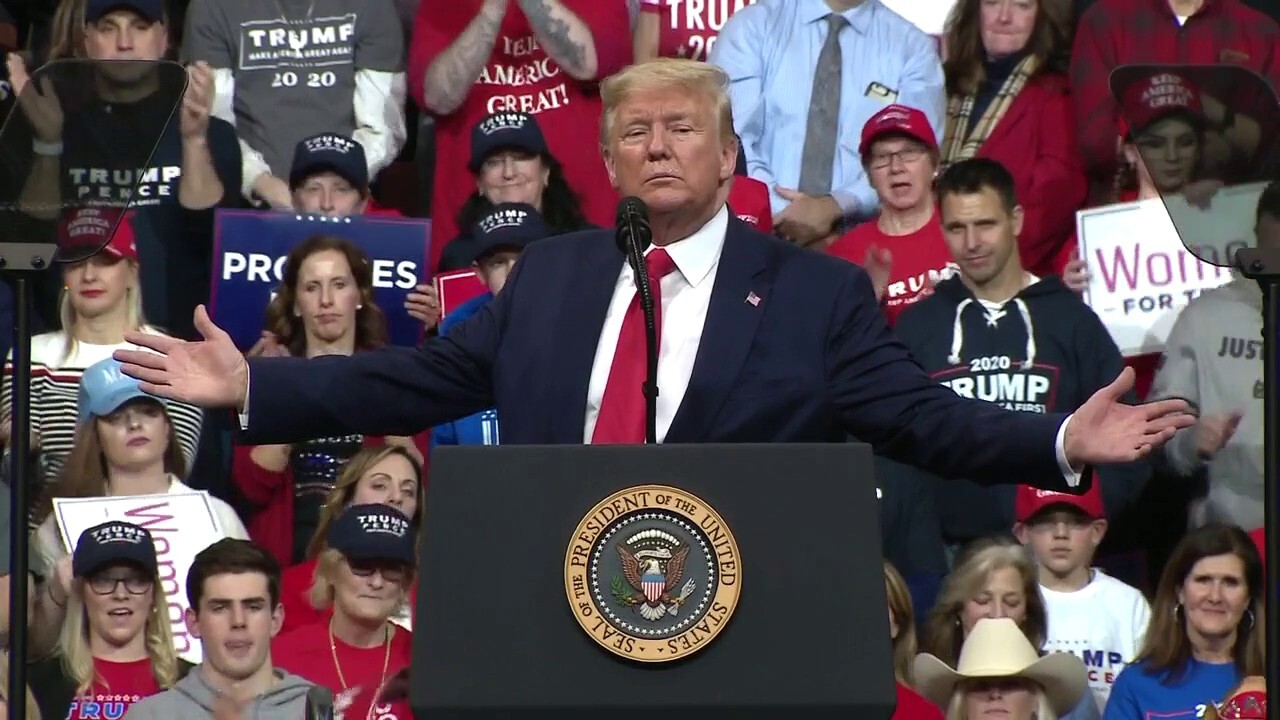 "Nine months from now, we are going to retake the House of Representatives, we are going to hold the Senate, and we are going to keep the White House," Trump said to thunderous applause. "We have so much more enthusiasm, it's not even close. They're all fighting each other. ... They don't know what they're doing; they can't even count their votes." 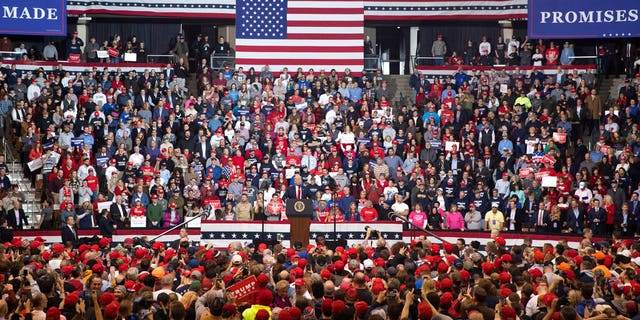 Huge crowds gathered in the overflow viewing area outside the packed Southern New Hampshire University (SNHU) arena in Manchester, which can hold approximately 11,000.

Earlier in the day, Trump retweeted a post from ABC News Chief White House Correspondent Jonathan Karl: "Cold rain, snow and lots of Trump supporters. Despite the miserable weather, there are already more people lining up outside the venue of @realDonaldTrump‘s rally tonight than you see at most of the events for the Democratic candidates. Some have been out here all night."

At the rally, Trump remarked to applause, "We have more in this arena and outside this arena than all of the other candidates, meaning the Democrats, put together and multiplied by five. ... We have never had an empty seat from the day your future First Lady and I came down the escalator."

Turning to illegal immigration and "insane" sanctuary cities -- just minutes after Attorney General Bill Barr announced sweeping new sanctions against sanctuary cities -- the president boasted that his administration had built over 100 miles of wall on the southern border.

"You have to see -- you wouldn't believe it, when that wall goes up, the numbers change like magic," Trump said. "Two things never change: a wheel and a wall."

The president then delivered a dramatic reading of a 1968 Al Wilson song that he used as an allegory to illegal immigration, in which a "tender woman" let a snake inside her home, only to suffer a "vicious bite."

"'Now I'm going to die,'" the woman complained. "'Shut up, silly woman,' said the reptile with a grin; 'You knew damn well I was a snake before you took me in.'" Attendees both inside and outside the SNHU arena erupted in cheers. 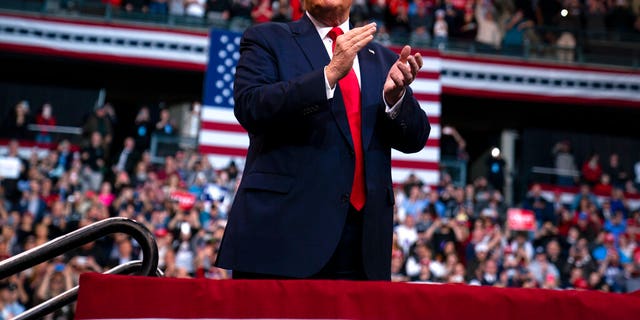 The Mexican government has played a key role in keeping illegal border crossings down, the president added, noting that he had pressured the country to do so under the threat of tariffs last year. Washington Democrats, by contrast, "want to let anyone into our country" and "give them free health care" and "free education," Trump said.

That was a reference to a recent presidential debate, when all candidates on stage seemingly endorsed the idea of paying for illegal immigrants' health expenses.

Additionally, Trump again honored House Republican Whip Steve Scalise, R-La., saying he looked "better now than when he got shot" in 2017 by a radical Sanders supporter while playing softball. Capitol Police officers took down the attacker as Scalise tried to crawl away, in a dramatic moment that Trump recounted last week at the White House. 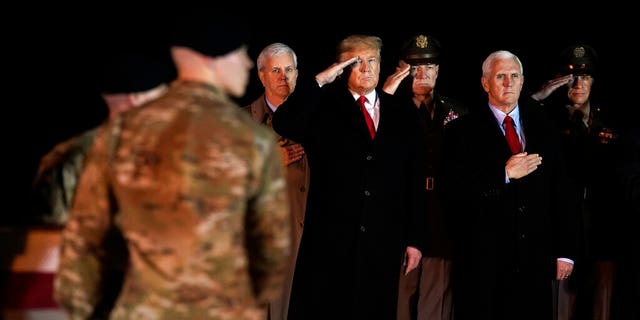 
The president, as he did during the State of the Union, further touted the historically low unemployment numbers for the country and minority groups specifically, as the crowd screamed, "USA!" Democrats' sweeping and expensive policies and regulations, Trump argued, would crush the stock market and reverse the ongoing economic boom.


"The Democratic Party wants to run your health care, but they can't even run a caucus in Iowa."— President Trump

"To support working families, we have reduced the cost of child care, expanded paid leave, and given 40 million American families an average of $2,200 more in their pockets thanks to the Republican child tax credit," Trump asserted. "We are the party of equal opportunity for all Americans."

He added, "While the extreme left has been wasting America's time with this vile hoax, we've been killing terrorists, creating jobs, raising wages, enacting fair trade deals, securing our borders, and lifting up citizens of every race, color, religion, and creed!" 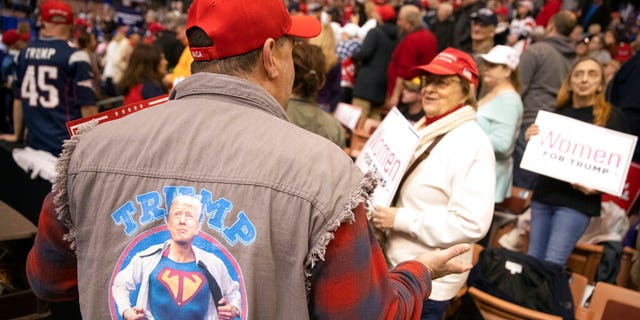 In an apparent flub as he attempted to appeal to the hometown crowd, Trump then seemingly confused the pivotal Revoluntary War site of Concord, Mass., with the less notable Concord, N.H.

"I love Concord. ... That's the same Concord we read about all the time, right?" Trump asked. In fact, the Battles of Lexington and Concord occurred in Massachusetts.

The rally was part of a tried-and-tested tactic for Trump: scheduling counter-programming to divert attention from the Democrats' debates and other major moments, keeping him in the spotlight and building supporters' enthusiasm in the months before Election Day.

Though it may not be the same show of force as last week, when dozens of Trump's surrogates, including officials from across all levels of government, flooded the state of Iowa, the Trump campaign made its presence known in New Hampshire before the state's primaries.

Vice President Mike Pence and Ivanka Trump, the president's daughter and senior adviser, got to the state ahead of the president to do some campaigning.

Still, the marquee event has been Trump's rally, and supporters started lining up for it Sunday. Images of bundled-up supporters camped outside the SNHU Arena in Manchester broke through the news coverage of the Democrats' primary. 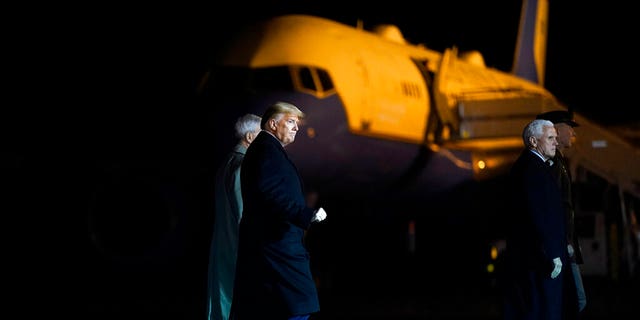 He was about to take the stage at a rally in Manchester that October when news broke that the FBI was re-opening its investigation into Hillary Clinton's emails, breathing new life into his then-struggling campaign.

And, it was the site of the penultimate rally of the 2016 contest — an extravagant send-off just hours before a post-midnight rally in Michigan.

Though Trump narrowly lost New Hampshire in the general election four years ago, his team has said it's one of the few states that could flip to red in November. Democrats in the state had a different view.

"It's obvious that Trump and the RNC are desperate to put New Hampshire in play after losing the state by 3,000 votes in 2016. But, we'll make sure that Granite Staters know that he has broken his promises to his state and he will lose here again in November," New Hampshire Democratic Party Chairman Ray Buckley told reporters.

The president relished the idea of dominating the stage in New Hampshire and stealing some of the media oxygen from the Democrats.

Advisers reportedly hoped that Secret Service moves in downtown Manchester to secure the area for the president's arrival would make it harder for Democrats and their supporters to transverse the state’s largest city in the hours before the primary's first votes are cast.

Fox News' Andrew O'Reilly and The Associated Press contributed to this report.
at February 11, 2020