House Speaker Nancy Pelosi’s impeachment efforts, designed to hobble Trump for the 2020 election, have turned into a series of unexpected boons for the president and his party. 
President Donald Trump has once again sidestepped the pit Democrats dug for him,


leaving them
to eat 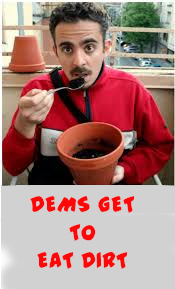 their own dirt...
House Speaker Nancy Pelosi’s impeachment efforts, designed to hobble Trump for the 2020 election, has turned into a series of unexpected boons for the president and his party. Here are five of the most conspicuous ones.
1. Congress Passes Trump’s Biggest Bipartisan Trade Bill
Loath to give Trump a legislative win prior to a presidential election, Pelosi flexed her majority muscle to sideline the U.S.-Mexico-Canada Agreement (USMCA), negotiated by the Trump administration to replace the much-maligned North American Free Trade Agreement. Trump lambasted NAFTA, the agreement credited with having opened the floodgates for offshoring American manufacturing. He promised to tear this “worst deal ever negotiated” and deliver the USMCA, designed to protect American jobs and workers.

Of course, Pelosi didn’t want to hand the president a win he could crow about, so she sat on the USMCA for a whole year and refused to bring it to a vote in the House despite bipartisan support. As Democrats launched their impeachment inquiry, the president and his GOP allies targeted the “do-nothing Democrats” as more invested in a partisan impeachment than in legislating for the good of the American people, pointing to the USMCA as a prime example.

This campaign hit a nerve among vulnerable members of Pelosi’s caucus in districts Trump won heavily, so she quickly called a vote on the USMCA to deflect the relentless criticism and provide these vulnerable Democrats something to show their constituents for the House seats they won in 2018.
2. Polls Move in Trump’s Favor

Prior to the start of the impeachment inquiry, all the top Democratic primary candidates were leading Trump by as much as double digits in the polls. Every one was projected to beat the president in a head-to-head match, including then-fourth-place Elizabeth Warren, needled by the president as Pocahontas for her bogus claim to Native American ancestry.

An August 2019 Fox News general election poll showed Joe Biden at 50 percent against Trump at 38 percent. It also showed Trump at 39 percent against Bernie Sanders at 48, Kamala Harris at 45, and Elizabeth Warren at 45.

The most telling impeachment effect on polls is occurring in the swing states of Michigan, Pennsylvania, and Wisconsin. Here the president beats all the leading Democratic contenders. The Firehouse/Optimus poll puts Trump ahead of Biden, Sanders, Warren, and Buttigieg by significant margins.

RealClearPolitics’ latest aggregate of polls shows the president hitting his highest job approval rating since his inauguration at 45.6 percent, the best it’s been in three years.
3. Biden Wobbles, Sanders Surges

The conflict of interest involving former Vice President Joe Biden and his son Hunter is perhaps the sharpest double-edged sword to emerge out of the impeachment saga. In an overzealous effort to get President Trump, Democrats have effectively sacrificed their front-runner. Trump and the GOP have successfully launched a impeachment counter-narrative, aiming their firepower at the Bidens and possible money dealings with Burisma, a Ukraine-based energy company.

Pelosi’s head-scratching move to hold up the articles of impeachment for four weeks after the Democrats impeached Trump had many Washington wags talking about how this was a tactic to help Democrat front-runner Joe Biden. They calculated that forcing the Senate trial close to the Iowa caucuses would unduly advantage Biden, who could continue campaigning while his senator rivals such as Sanders, Warren, and Amy Klobuchar were stuck at the Senate impeachment trial.

If there ever were a mother of boomerangs, let’s just say this is a close kin. Biden’s front-runner trajectory is shaky while Sanders’ path to the Democratic nomination is littered with Hillaryish operatives re-rigging the rules for maximum obstruction, a sure sign the party bosses fear Sanders could become their nominee and unleash the nightmarish certitude of Trump’s re-election.
4. A United GOP

“Do not doubt me on this,” said the self-proclaimed God’s-gift-to-broadcasting Rush Limbaugh when he declared that the GOP has never been more united than it is now. “I have never seen this before,” the radio host barked to his millions of listeners.

Grassroots conservatives have often felt consternation at spineless Republicans, who frequently bend to the will of Democrats and the vociferous media. But not this time. The impeachment defense mounted by the House GOP was not spineless. Led by the likes of Reps. Devin Nunez, Jim Jordan, John Ratcliffe, and others, they forced admission from witness after witness that not one had any direct knowledge of crimes the Democrats accuse Trump of committing.

During the House’s final vote to impeach, there was not one defection from the GOP despite the usual media intimidation that, in the past, would have been enough to pry loose the weakest link. In fact, it was the other way around. A couple Democrats voted with the GOP, and one actually broke ranks with the Democratic Party to become a Republican.

In the Senate, notwithstanding Sens. Susan Collins and Mitt Romney’s desertion on additional witnesses, every amendment introduced by Minority Leader Chuck Schumer gained no Republican support, and the cool divide between Republicans and Democrats stood at a stony 53-47 in vote after vote. The certain acquittal of Trump come Wednesday’s final impeachment vote may even see Democratic defections to the GOP side.
5. The Deep State May Face Criminal Inquiry

When the president’s defense team presented their evidentiary argument to counter Democrats’ articles of impeachment, they took time to lay out that the Democrats conveniently neglected to mention one exculpatory fact after another from their body of evidence amassed during the House hearings. Why?

Like a running gag in a movie, the president’s defense lawyers kept asking this question. In addition to credibly questioning the validity of the House managers’ allegations that the president committed impeachable acts, the repeat whys were more than enough to suggest something far more sinister was afoot and more than enough to stoke the fires of a conspiracy theory evolving in conservative media outlets.

Even Twitter is not immune. Tweets about the supposed whistleblower, complete with an identifying name and picture, draw links to the Robert Mueller investigation and to the office and staff of Rep. Adam Schiff, the lead impeachment manager.

The crumb line seems to suggest that Pelosi’s impeachment of Trump was but a continuing effort to overthrow this president and disenfranchise the votes of millions of Americans going all the way back to Crossfire Hurricane, the high-level FBI investigation that conducted wiretapping or FISA surveillance on the 2016 Trump campaign through Carter Page. If proven, the president may very well have a counter-offensive in his hands against his detractors, which could actually land some of them behind bars.

Consider Lt. Col. Alexander Vindman’s testimony in the House hearings. He testified that after hearing the conversation between Trump and the president of Ukraine, he told another intelligence officer not formally part of the National Security Council Vindman is on. Is the whistleblower the person Vindman spoke to? The GOP initiated this line of questioning during the House hearings, but Schiff immediately shut it down.

Was this a leak of classified information to someone who may not have had the appropriate level of security clearance? Was this a crime under national security laws? If true, as reported, that Vindman has ties to John Brennan, former CIA chief and fierce critic of the president, would it be inconceivable to think that Brennan may have his hand in this as well?

If this thread in any way links to Crossfire Hurricane and to the origins of the Trump investigation over Russian collusion, then U.S. Attorney John Durham’s scope of investigation may have just widened.
Zelie Lorenzana grew up in the Philippines. After attending film school at the University of Southern California, she lived in the Caribbean, New York, Italy, Northern California, and Hawaii. She now resides outside Washington, D.C., where she writes about conservative politics.
at February 04, 2020