Trump doubles down on striking cultural sites in Iran

By
ROBERT BURNS
and
ONATHAN LEMIRE 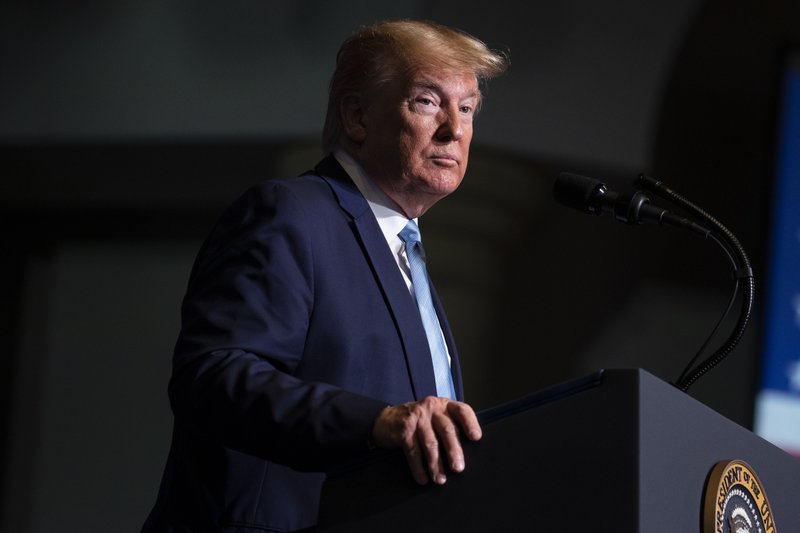 WASHINGTON (AP) — President Donald Trump insisted Sunday that Iranian cultural sites were fair game for the U.S. military, dismissing concerns within his own administration that doing so would constitute a war crime under international law. He also warned Iraq that the U.S. would levy punishing sanctions if it expelled American troops in retaliation for a U.S. strike in Baghdad that killed a top Iranian official.

Trump’s comments came amid escalating tensions in the Middle East following last week’s strike on Gen. Qassem Soleimani, the head of Iran’s elite Quds force. Iran has vowed to retaliate and Iraq’s parliament responded by voting Sunday to oust U.S. troops based in the country.

Trump first raised the prospect of targeting Iranian cultural sites Saturday in a tweet. Speaking with reporters Sunday as he returned to Washington from his holiday stay in Florida, he doubled down, despite international prohibitions.

Trump said the U.S. wouldn’t leave without being paid for its military investments in Iraq over the years — then said if the troops do have to withdraw, he would levy punishing economic penalties on Baghdad.

“We will charge them sanctions like they’ve never seen before ever. It’ll make Iranian sanctions look somewhat tame,” he said. “If there’s any hostility, that they do anything we think is inappropriate, we are going to put sanctions on Iraq, very big sanctions on Iraq.”

He added: “We’re not leaving until they pay us back for it.”

Earlier Sunday, Secretary of State Mike Pompeo said the U.S. military may strike more Iranian leaders if the Islamic Republic retaliates. His comments came as other repercussions from the attack played out: the U.S. military coalition in Baghdad suspended training of Iraqi forces to concentrate on defending coalition troops; and in Beirut, the Lebanese Hezbollah chief said U.S. forces throughout the Mideast are fair targets for retaliation.

In Tehran, Iranian state television reported that the country will no longer abide by any limits of the 2015 nuclear deal it signed with the United States and other world powers. Trump withdrew the U.S. from the deal in 2018 and stepped up economic sanctions on Tehran — actions that accelerated a cycle of hostilities leading to the Soleimani killing.

The State Department had no immediate comment on Iran reportedly abandoning the nuclear deal, a move that holds the prospect of Iran accelerating its production of materials for a nuclear weapon.

Trump had issued warnings to Iran by tweet Sunday afternoon. “These Media Posts will serve as notification to the United States Congress that should Iran strike any U.S. person or target, the United States will quickly & fully strike back, & perhaps in a disproportionate manner,” he wrote. “Such legal notice is not required, but is given nevertheless!”

That tweet also appeared to serve as a warning to Congress – that Trump would respond quickly to any attack and without first gaining the approval of lawmakers. Democrats in Congress have complained that Trump’s order to kill Soleimani took place without first consulting with or informing top lawmakers, noting that Congress still holds sole power to declare war. Trump did meet the 48-hour deadline required by the War Powers Act to notify Congress of the deadly drone strike, though the document provided Saturday was entirely classified and no public version was released.

The White House faced a barrage of questions about the killing’s legality. Pompeo said the administration would have been “culpably negligent” in its duty to protect the United States if it had not killed Soleimani, although he did not provide evidence for his previous claims that Soleimani was plotting imminent attacks on Americans. Instead of arguing that an attack had been imminent, he said it was inevitable.

“I really worry that the actions the president took will get us into what he calls another endless war in the Middle East. He promised we wouldn’t have that,” said Chuck Schumer of New York, the Senate’s top Democrat.

Schumer said Trump lacks the authority to engage militarily with Iran and Congress needs a new war powers resolution “to be a check on this president.” To which Pompeo said: “We have all the authority we need to do what we’ve done to date.”

Sen. Mark Warner, D-Va., said the administration violated the Constitution by not consulting with Congress in advance.

“It’s also important because one, you potentially get members of Congress to buy in ahead of time, and two, they may ask that hard question that’s not asked in an insular group,” Warner said.

Congressional staffs got their first briefings from the administration on Friday, and members were expected to be briefed this week.

Pompeo’s appearance on six news shows may have been aimed at dissuading Iran from launching a major retaliation for the Soleimani killing. The Iranians have said the U.S. should expect a strong response. They have a range of options, from cyberattacks to military assaults.

It was unclear whether the administration would attempt a back-door communication with Iran in pursuit of its stated goal of “de-escalation” of tensions. Retired Gen. David Petraeus, an ex-CIA director and former commander of U.S. forces in Iraq, said he believes the administration needs a strategy for tamping down the chances of all-out war.

“I think the real question for the United States is, will there be a diplomatic initiative that says, OK, look, this is not headed in a good direction. We truly do want to de-escalate. Everyone is going to lose if this continues to ratchet upward. Can we now sit down and talk,” Petraeus said.

Pompeo declined to say whether he had sought to communicate with Iran since Friday. He stressed the U.S. resolve to hold Iran accountable for its interventions in Iraq, Syria and elsewhere in the Mideast.

Pompeo said the Obama administration had tried to “challenge and attack everybody who was running around with an AK-47 or a piece of indirect artillery. We’ve made a very different approach. We’ve told the Iranian regime, ‘Enough. You can’t get away with using proxy forces and think your homeland will be safe and secure.’ We’re going to respond against the actual decision-makers, the people who are causing this threat from the Islamic Republic of Iran.”

He said the cost to Iran if it uses proxy forces to hit American targets will come down on no just those proxies, which are present in Iraq, Syria, Yemen, Lebanon and elsewhere.

“They will be borne by Iran and its leadership itself,” Pompeo said. “Those are important things the Iranian leadership needs to put in its calculus as it makes its next decision.”

Pompeo tip-toed around questions about Trump’s tweet Saturday threatening to attack Iranian cultural sites, a military action that likely would be illegal under the laws of armed conflict and the U.N. charter.

Trump wrote that if Iran were to strike “any Americans, or American assets, we have targeted 52 Iranian sites (representing the 52 American hostages taken by Iran many years ago), some at a very high level & important to Iran & Iranian culture, and those targets, and Iran itself, WILL BE HIT VERY FAST AND VERY HARD.”

Pompeo said any U.S. military strikes inside Iran would be legal.

“We’ll behave inside the system,” Pompeo said. “We always have and we always will.”

One U.S. national security official said Trump’s threat had caught many in the administration off guard and prompted calls for others in the government, including Pompeo, to clarify the matter. The official, who was not authorized to speak publicly to the issue, said clarification was necessary to affirm that the U.S. military would not intentionally commit war crimes.

Oona Hathaway, an international law professor at Yale and a former national security law official in the Defense Department’s legal office, said in an interview that Trump’s threat amounted to “a pretty clear promise of commission of a war crime.” She said the Soleimani killing likely also was illegal because the administration has not shown the threat he posed was imminent in the sense that it was so urgent that action was required without consulting Congress.

The Pentagon’s chief spokesman, Jonathan Hoffman, referred questions about the Trump tweet to the White House.

Some of the Democrats running to challenge Trump in November questioned whether he had a long-term plan for the Mideast.

Former Vice President Joe Biden said Trump was ill-prepared for the repercussions of the strike on Soleimani and had alienated allies by not alerting them of the plans. “I think we need a president who could provide steady leadership on Day One,” he said. “The next president is going to inherit a divided nation and a world in disarray.”

Pete Buttigieg, the former mayor of South Bend, Indiana. said: “When you’re dealing with the Middle East, you need to think about the next and the next and the next move. This is not checkers. And I’m not sure any of us really believe that this president and the people around him″ are “really going through all of the consequences of what could happen next.”

And Massachusetts Sen. Elizabeth Warren, a juror in Trump’s upcoming impeachment trial, wondered about the timing of the attack on the Iranian general.

``I think the question people reasonably ask is, `Next week Donald Trump faces the start potentially of an impeachment trial. And why now?′ I think people are starting to ask, `Why now did he do this? Why not delay?′ And why this one is so dangerous is that he is truly taking us right to the edge of war,″ she said.

Pompeo appeared on ABC’s “This Week,” CNN’s “State of the Union,” NBC’s “Meet the Press,”′ CBS’ “Face the Nation,″ ”Fox News Sunday” and Fox News Channel’s “Sunday Morning Futures.” Schumer was on ABC, Warner and Warren were on NBC, Petraeus was on CBS, Buttigieg was on CNN and Graham was on Fox News Channel.
Posted by Ron Ernie at 21:32