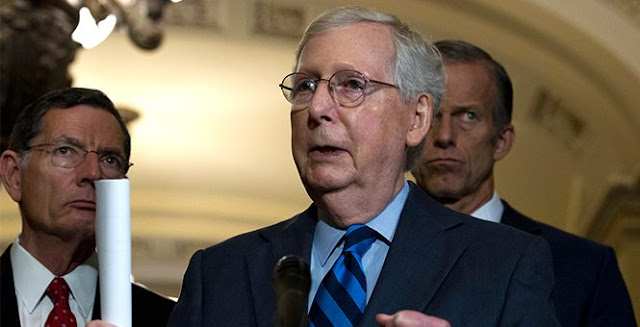 Two key moderate senators, Susan Collins (R-Maine) and Lisa Murkowski (R-Alaska), on Monday evening backed McConnell’s position that the Senate should follow the precedent of the 1999 Clinton impeachment trial and defer until later in the process the question of calling additional witnesses.

Collins told reporters at Monday evening votes that the Senate should follow the 1999 precedent and consider the question of subpoenaing additional witnesses and documents only after House impeachment managers and Trump’s defense team present their opening arguments.

She noted in a statement Monday that then-Senate Majority Leader Trent Lott (R-Miss.) and Democratic Leader Tom Daschle (D-S.D.) adopted a resolution in 1999 to set out the rules for the proceeding that didn't include any agreement for specific witnesses to testify.

“The process moved to a period during which the Senate debated and voted that three witnesses should be deposed. I believe that this process — the Clinton approach — worked well,” she said.

Murkowski also urged colleagues to follow the path laid out during the Clinton trial.

“I think we need to do what they did the last time they did this unfortunate process and that was to go through a first phase and then they reassessed after that,” she told reporters.

The Alaska senator also said questions about whether former national security adviser John Bolton and other key witnesses should testify should be discussed only after Speaker Nancy Pelosi (D-Calif.) sends the articles of impeachment to the Senate.

“We don’t have anything to get to? So do you have any interesting news for me on that? Like when we might be able to get articles?” she said.

She said the precedent set by Clinton’s trial “is how we get started with this.”

“I don’t think there is any decision on Bolton because we don’t have articles,” she added.

The statements of these two crucial votes are a setback for Schumer and Pelosi who have been pressing GOP moderates hard over the past several weeks to insist on an opening resolution for the trial that would set the table for subpoenaing key witnesses and documents.

Republicans control 53 Senate seats and Democrats have 45, plus the support of two independents. That means Schumer needs the support of at least four Republicans to pass an organizing resolution for the trial that meets his demands.

Without Collins and Murkowski, the Democratic leader has no chance of passing a resolution that would require key witnesses to testify and key documents to receive review before a final up-or-down vote on the articles of impeachment.

Schumer has insisted on hearing from Bolton, who said Monday that he would testify before the Senate if subpoenaed; acting White House chief of staff Mick Mulvaney; Robert Blair, a senior adviser to Mulvaney; and Michael Duffey, associate director for national security at the Office of Management and Budget.

“A simple majority is all it takes to ensure that the Senate issues a subpoena for these witnesses. If only four Republicans decide that Mr. Bolton and the three other witnesses ought to be heard, they will be heard, because every Democrat will vote to hear," he said.

Schumer noted that Bolton’s lawyers have said he has “new and relevant information” to share and said any GOP senators who vote against compelling his testimony “would make absolutely clear they are participating in a cover up.”

McConnell on Monday said the Senate should stick to the Clinton precedent regardless of recent developments, such as Bolton’s statement.

“The Senate does not bob along on the current of every news cycle,” he said on the Senate floor.

He noted the Senate didn’t vote to subpoena witnesses and new evidence for Clinton’s trial until nearly three weeks after it adopted the opening resolution.

“In 1999, every single U.S. senator agreed to establish basic parameters for the start of the trial up front and be reserved mid-trial questions such as witnesses until later. The vote was 100-0,” McConnell argued, sticking firmly to the position he has held in recent weeks.

Sen. Mitt Romney (R-Utah), one of Trump’s most outspoken critics, deviated most from the party line among GOP senators Monday, but he stopped short of saying he would vote to subpoena Bolton or any witness.

Romney said he wants to know what Bolton has to say but declined to make a decision on how he would vote on a subpoena until he knows more about the process.

“I would like to be able to hear from John Bolton. What the process is to make that happen, I don’t have an answer for you,” he said.