Iran's response to US will be military -- Khamenei's advisor 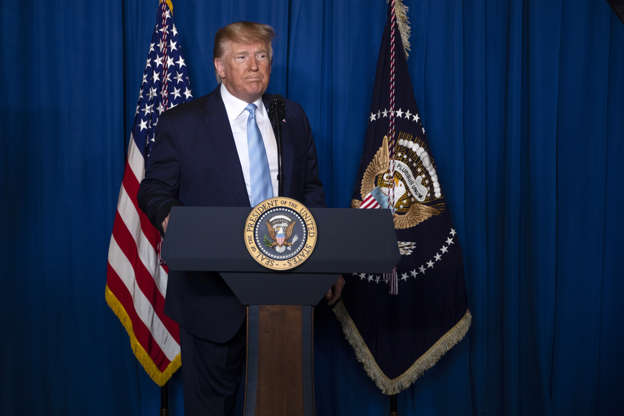 
The United States killed Iran's top general and architect of Tehran's proxy wars in the Middle East in an airstrike at Baghdad's international airport on Jan. 2, an attack that threatens to dramatically ratchet up tensions in the region.(Pictured) President Donald Trump arrives to deliver remarks on Iran, at his Mar-a-Lago property, on Jan. 3 in Palm Beach, Fla.

The military adviser to Iran's Supreme Leader said Sunday that Tehran's response to the killing by the United States of its most most influential general will "for sure be military."

In an exclusive interview with CNN in Tehran, the adviser -- Maj. Gen. Hossein Dehghan -- made the most specific and direct threat yet by a senior Iranian official following the killing of Gen. Qasem Soleimani in a US drone strike in Baghdad.

Dehghan said Iran would retaliate directly against US "military sites."

Dehghan is a former defense minister and is now the main military adviser to Ayatollah Ali Khamenei. He told CNN that reprisals would come from Iran itself, not its allied militia in the region.

"It might be argued that there could be proxy operations. We can say America, Mr. Trump, has taken action directly against us -- so we take direct action against America."

The United States has a growing military presence in the region. Thousands of US troops have been deployed to Saudi Arabia, and there are some 5,000 at bases in Iraq. The US also has a major air base in Qatar and a naval presence in Bahrain, as well as troops stationed in Jordan, Kuwait and the United Arab Emirates.

In common with other Iranian officials, Dehghan suggested that Iran was in no hurry to retaliate and would choose its targets carefully. "Our reaction will be wise, well considered and in time, with decisive deterrent effect."

Iran's President Hassan Rouhani had earlier said that Americans would face consequences for killing Soleimani "not only today, but also in the coming years."

Given the rhetoric of both sides, there is a growing risk of escalation in what has become the most dangerous confrontation between the US and Iran in decades.

Late Saturday, President Donald Trump tweeted that "If Iran attacks an American Base, or any American, we will be sending some of that brand new beautiful equipment their way...and without hesitation!"

The President continued: "They attacked us, & we hit back. If they attack again, which I would strongly advise them not to do, we will hit them harder than they have ever been hit before!"

"It was America that has started the war. Therefore, they should accept appropriate reactions to their actions," he said.

"The only thing that can end this period of war is for the Americans to receive a blow that is equal to the blow they have inflicted. Afterward they should not seek a new cycle."

In recent months, officials in the Trump administration and even the President himself have floated the possibility of renewed dialogue with Iran. Dehghan dismissed that possibility.

"Look, for several reasons we didn't want to negotiate with this incumbent US administration. Now, after what happened to Mr. Soleimani there is no point for negotiations or relations. It's impossible."
'Gangster and a gambler'

Dehgahn also responded to Trump's threat to include Iranian cultural sites among 52 targets the US had selected to strike in the event of Iranian retaliation. The number was chosen to match the number of hostages taken in the 1979 takeover of the US Embassy, Trump said.

Alireza Mohammadi/ISNA via AP In this photo provided by The Iranian Students News Agency, ISNA, flag draped coffins of Gen. Qassem Soleimani and his comrades who were killed in Iraq in a U.S. drone strike, carried on a truck surrounded by mourners during their funeral in southwestern city of Ahvaz, Iran, Sunday, Jan. 5, 2020. The body of Soleimani arrived Sunday in Iran to throngs of mourners, as U.S. President Donald Trump threatened to bomb 52 sites in the Islamic Republic if Tehran retaliates by attacking Americans. (Alireza Mohammadi/ISNA via AP)

"He doesn't know international law. He doesn't recognize UN resolutions either. Basically he is a veritable gangster and a gambler."

At one point in the interview, Dehghan pulled out a picture of Soleimani and held it up to the camera.

"All Iranians are Qasem Soleimani," he said, and insisted the Quds force, which Soleimani had led since 2003, would not be weakened by his death. The Quds have been responsible for projecting Iranian influence across the Middle East and beyond and have played a major role in supporting the Assad regime in Syria.

"The person who has replaced him has been cooperating with him for two decades. He has the same manner and method," Dehghan said.

Iran's will to defend its interests "has increased a thousand times. We don't feel anything. We have a logic, the logic of martyrdom."

As the war of words escalates, Dehghan echoed the comments of other senior Iranian officials that the country was not seeking war.

"Let me tell you one thing: Our leadership has officially announced that we have never been seeking war and we will not be seeking war."

But his demand that the US not respond to any reprisals by Iran for Soleimani's killing will surely fall on deaf ears. This cycle of violence accelerated when a US contractor was killed in a rocket attack on a joint US-Iraqi military base on December 29th.

US officials held a pro-Iranian militia responsible for the attack. Its leader was killed along with Soleimani in the US drone strike in Baghdad.
at January 05, 2020