A night on the plains: Chasing the mysterious drones of eastern Colorado


How one community is dealing with their bizarre aerial visitors 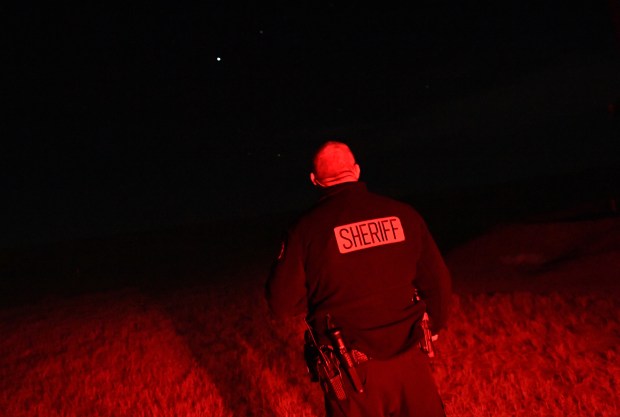 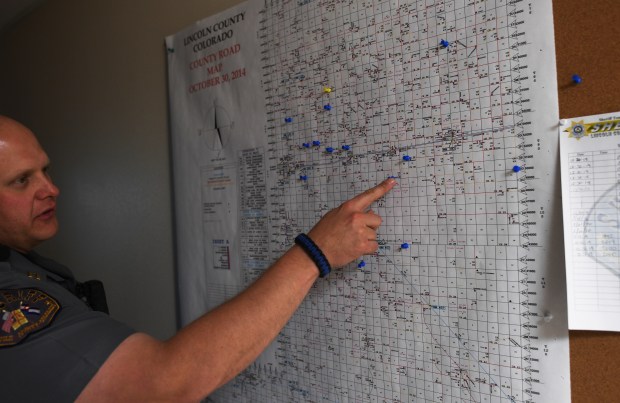 LAST CHANCE — It’s 6:36 p.m. on a chilly January night, and the Lincoln County Sheriff’s Office is prepping for calls.

On a desolate dirt road just north of Limon, the sky is lit by stars and a waxing crescent moon. Then, a small set of red-and-white lights blink rapidly, punctuating the rural Colorado landscape. The aerial object travels briskly across the sky at several hundred feet above the fields and wind turbines. Minutes later, another one creeps onto the horizon. And then another one.

The drones hover above a vast expanse of land outside a small, mostly empty Colorado town: Last Chance.


“We just coexist with them now,” said Lincoln County Capt. Michael Yowell. “You see ’em and just tip your cap.”

Colorado’s Eastern Plains are ground zero for one of the strangest phenomenon in the United States. Since mid-December, a legion of unexplained drones with 6-foot wingspans have flown the night skies over at least nine counties in eastern Colorado and western Nebraska, inspiring wild conspiracy theories, perplexing agencies and confounding citizens from around the world.

The Federal Aviation Administration and Colorado Department of Homeland Security are investigating the bizarre flights, as Gov. Jared Polis and U.S. Sen. Cory Gardner, R-Yuma, vow to get to the bottom of what has become a national mystery.

Local sheriffs and residents are concerned and bemused by the hubbub. But they yearn to figure out the origin behind the strange visitors.

RJ Sangosti, The Denver PostCaptain Michael Yowell, of Lincoln County Sheriff’s office, shows a map of Lincoln County that marks confirmed sightings of mysterious drones in the area on Jan. 2, 2020 in Hugo.
“No rhyme or reason”

Inside the Lincoln County Sheriff’s Office in Hugo on Thursday afternoon, Sheriff Tom Nestor and Capt. Yowell stared at a county map hanging in a narrow hallway.

It’s dotted with blue and yellow thumbtacks, depicting sightings from across the county of just under 5,500 people. There’s a series of tacks clustered around Interstate 70 in Limon, with a few scattered north and south of the interstate. Some people reported the drones flying in packs. Others saw solo flights.

“This one here just sat overhead for 90 minutes,” Yowell said, pointing toward a tack pinned near Limon.

Yowell and Nestor thought they had figured out a pattern: The drones first were seen after Christmas in the northern part of the county and worked their way south, mostly flying in rigid, grid-like patterns. They traveled across the county horizontally, down a bit, then made their way back across in the other direction.

The Lincoln County officials expected sightings to grow in the southern part of the county as the drones made their way down the state. Those reports never came.

“There’s just no rhyme or reason to any of this,” Yowell said.

Nestor said he has spoken to local oil companies and drone experts, learning information but getting no answers. Neighboring sheriffs have spoken to the military, which has denied involvement, he said. The Air Force, the Defense Advanced Research Projects Agency, the Department of Defense, the Environmental Protection Agency, the North American Aerospace Defense Command and the University of Colorado Boulder have told The Denver Post that they’re not flying the drones.

Gardner, whose hometown of Yuma has been in the thick of the drone activity, tweeted Friday that the FAA has boots on the ground and is “working with federal law enforcement to track down the operator.”

RJ Sangosti, The Denver PostFaye Harding, who has worked at the local watering hole for the past 20 years, laughs about all the different stories she has heard about why drones are flying overhead on Jan. 2, 2020 in Hugo. The stories range from drug running cartels to aliens, she said.
“Something different”

While law enforcement tries to solve the mystery, the mention of drones across Lincoln County prompts knowing nods and wry smiles from residents.

Faye Harding hasn’t seen the mysterious flying objects, but she’s sure heard about them from patrons at the Plains Bar in downtown Hugo where she works. Harding has heard all the theories floating around but said she isn’t worried.

“I don’t think they’ll pick me up and take me away,” she said with a grin. “It’s definitely interesting though — something different.”

Hugo is no stranger to, well, strangeness. In 2016, the town received international attention after THC showed up on tests in the town’s water supply. (Officials determined it was a false positive). The drones are just the latest example of what residents say is a penchant for bizarre occurrences in their small slice of rural life.

RJ Sangosti, The Denver PostA cat relaxes in the sun on Jan. 2, 2020 in Hugo. The small town of Hugo. The quiet small town in eastern Colorado has become part of a national news story about mysterious drones flying overhead

Behind the counter of the Country Pride restaurant in Limon, Stephanie Hill’s eyes lit up when asked about the flying objects.

“My husband is really into aliens,” she said as she served burgers and chicken fried steak. Hill recalled her 9-year-old daughter straining her neck the other night in the car, trying to see the flashing lights overhead.

RJ Sangosti, The Denver PostLincoln County Sheriff Deputy Justin Allen stands outside of his squad car looking up at the night sky on Jan. 2, 2020 near Limon. Lincoln County Sheriff’s office is working with surrounding counties to figure out who is behind the mystery drones flying overhead.

As light turned to dark Thursday, stars appeared in the night sky. And soon after, so did drones. Around 6:10 p.m., a Denver Post reporter and photographer spotted two unmanned aircraft whizzing west above I-70, 8 miles outside Limon.

More drones could be seen outside Last Chance, a slight whir audible as they passed overhead. The aircraft flashed one red light and one white. Two other yellowish lights remained on throughout the flight. In 20 minutes, a half-dozen flying objects could be seen traversing over the barren wind farms.

RJ Sangosti, The Denver PostThe grouping of lights in the center of the photograph shows a drone flying several hundred feet in the night sky on Jan. 2, 2020 near Limon.


On a darkened road just north of Limon, Allen, the Lincoln County deputy, surveyed the heavens, excitedly pointing out drones as they made their way into his line of sight.

“See the flashing lights? They’re much faster than a regular aircraft,” he said.

Allen and his fellow deputies have been getting calls for 10 days, hustling to respond as residents across the county report sightings of the mysterious objects. Is it a mapping company? Oil and gas recon? Government spying? Nobody has answers.

“It’s a mix of concern and curiosity,” Allen said, as the drones crossed in front of him one after another. “It’s really just the uncertainty of it. Probably the weirdest thing I’ve seen here.”

Journalism doesn’t grow on trees. Please support The Denver Post.
Become a subscriber for only 99 cents for the first month.
at January 06, 2020