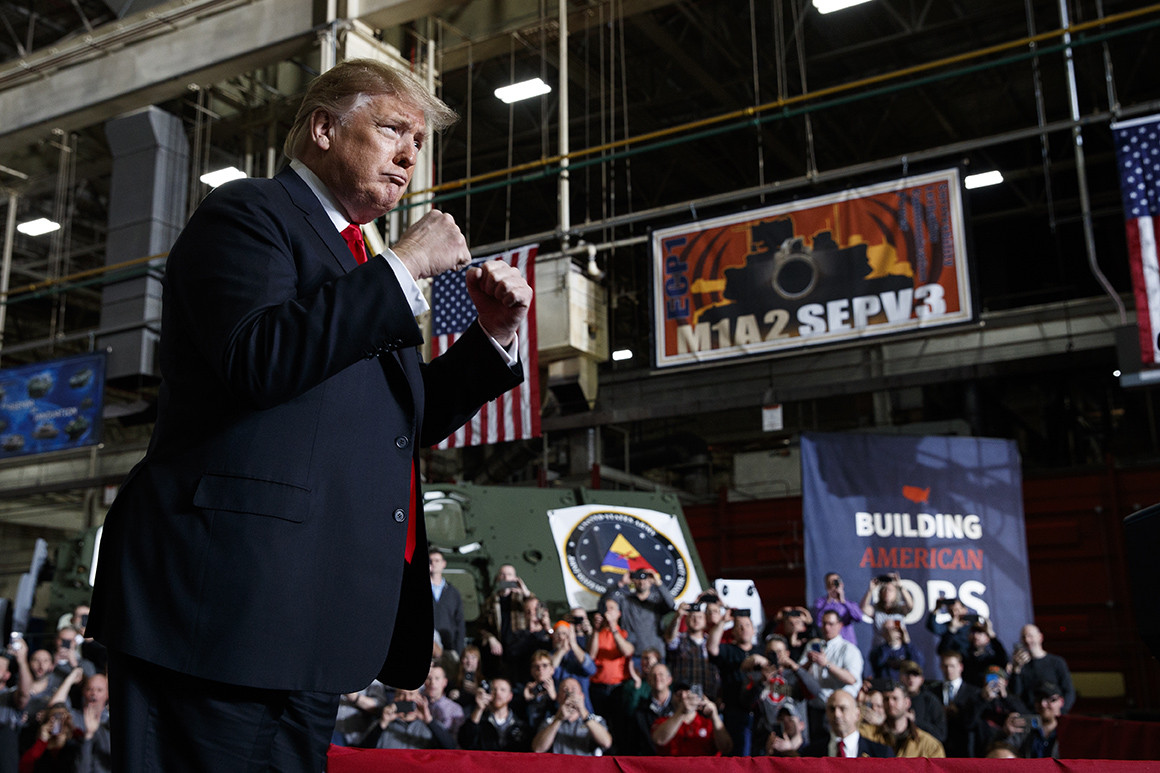 “The economy is just so damn strong right now and by all historic precedent the incumbent should run away with it,” said Donald Luskin, chief investment officer of TrendMacrolytics, a research firm whose model correctly predicted Trump’s 2016 win when most opinion polls did not. | Evan Vucci/AP Photo


Economic models point to a Trump blowout in 2020. But a faltering economy or giant scandal could change everything.


By
BEN WHITE
and
STEVEN SHEPARD


President Donald Trump has a low approval rating. He is engaging in bitter Twitter wars and facing metastasizing investigations.

But if the election were held today, he’d likely ride to a second term in a huge landslide, according to multiple economic models with strong track records of picking presidential winners and losses.

While Trump appears to be in a much stronger position than his approval rating and conventional Beltway wisdom might suggest, he also could wind up in trouble if the economy slows markedly between now and next fall, as many analysts predict it will.

And other legal bombshells could explode the current scenario. Trump’s party managed to lose the House in 2018 despite a strong economy. So the models could wind up wrong this time around.


The race for 2020 starts now. Stay in the know. Follow our presidential election coverage.


By signing up you agree to receive email newsletters or alerts from POLITICO. You can unsubscribe at any time. This site is protected by reCAPTCHA and the Google Privacy Policy and Terms of Service apply.

Despite all these caveats, Trump looks surprisingly good if the old James Carville maxim coined in 1992 — “the economy, stupid” — holds true in 2020.

“The economy is just so damn strong right now and by all historic precedent the incumbent should run away with it,” said Donald Luskin, chief investment officer of TrendMacrolytics, a research firm whose model correctly predicted Trump’s 2016 win when most opinion polls did not. “I just don’t see how the blue wall could resist all that.”

Models maintained by economists and market strategists like Luskin tend to ignore election polls and personal characteristics of candidates. Instead, they begin with historical trends and then build in key economic data including growth rates, wages, unemployment, inflation and gas prices to predict voting behavior and election outcomes.

Yale economist Ray Fair, who pioneered this kind of modeling, also shows Trump winning by a fair margin in 2020 based on the economy and the advantage of incumbency.

“Even if you have a mediocre but not great economy — and that’s more or less consensus for between now and the election — that has a Trump victory and by a not-trivial margin,” winning 54 percent of the popular vote to 46 for the Democrat, he said. Fair’s model also predicted a Trump win in 2016 though it missed on Trump’s share of the popular vote.

Still, Luskin, Fair and other analysts who use economic data and voting history to make predictions also note that a sharp decline in growth and an increase in the unemployment rate by next fall could alter Trump’s fortunes.

“It would have to slow a lot to still be not pretty good,” Luskin said, adding that what really matters is the pace of change. Even if overall numbers remain fairly strong, a sharp move in the wrong direction could alter voting behavior.

The White House remains confident that the GOP tax cut will support growth of 3 percent both this year and next, keeping job and wage gains strong. That’s much higher than consensus forecasts from the Federal Reserve and major banks that generally see a global slowdown led by Europe and China, coupled with the fading impact of U.S. tax cuts pushing U.S. growth closer to 2 percent this year with job gains slowing.

But Trump may have one major ally in his quest to make sure the numbers don’t go much lower than this: the Fed, which recently stopped its campaign of interest rate hikes. And on Wednesday the central bank said it foresees no more rate hikes this year.

The moves followed months of Trump bashing the Fed for raising rates too much and stomping on his economy, though Chairman Jerome Powell has said repeatedly that politics plays no role in the bank’s decision.

Whatever the case, a much more gentle Fed could slide a floor beneath any decline in Trump’s economy and boost his reelection chances significantly.

Mark Zandi, chief economist at Moody’s Analytics and a regular Trump critic, has been road-testing a dozen different economic models for the 2020 race. At this point, Trump wins in all 12 — and quite comfortably in most of them. The Moody’s models look at economic trends at the state level.

“If the election were held today, Trump would win according to the models and pretty handily,” Zandi said. “In three or four of them it would be pretty close. He’s got low gas prices, low unemployment and a lot of other political variables at his back. The only exception is his popularity, which matters a lot. If that falls off a cliff it would make a big difference.” The Moody’s models look at economic trends at the state level and incorporate some political variables including a president's approval rating.

The Moody’s approach performed well in recent presidential elections, but missed the 2016 result in part because it did not account for a potential drop in Democratic turnout in key swing states. Zandi is trying to correct for that now before rolling out a new model sometime this summer.

Trump has already upended many of the rules of presidential politics. His party suffered a drubbing in last year’s midterm elections despite the strong economy, and the yawning gap between how voters view the president and the nation’s economic standing is growing even larger: Presidents typically just aren’t this unpopular when the economic engine is humming along.

Trump this week seized on a new CNN poll that showed more than seven in 10 Americans, or 71 percent, view the U.S. economy as “very good” or “somewhat good.” That was higher than CNN has measured at any point since a CNN/USA Today/Gallup poll in Feb. 2001 found 80 percent thought the economy was that robust.

Yet Trump’s approval rating in the poll — which is usually tied closely to the economy — is just 42 percent. And unlike during the late ’90s, when President Bill Clinton’s approval ratings surged ahead of his personal favorability amid major scandal, Trump’s favorable ratings (41 percent in the CNN poll) track closely with his job-approval rating.

Those low scores also apply to many attributes typically seen as desirable in presidents. Just 40 percent say Trump cares about people like them; 34 percent say he is honest and trustworthy; 41 percent say he can manage the government effectively; and 32 percent say he will unite the country, not divide it.

Moreover, even how Americans view the state of the country has become divorced from the economy. In the latest POLITICO/Morning Consult poll, only 36 percent of voters said the U.S. was headed in the right direction, compared with nearly two-thirds, 64 percent, who said it was off on the wrong track.

For the economic models to be correct, voters would have to shrug off much of what they dislike about Trump and decide the strength of the economy makes a change unwise.

Prominent Democrats know that while Trump might seem like a loose cannon faced with the threat of a devastating report from special counsel Robert Mueller, he will likely be a formidable opponent in 2020, especially if the economy remains close to where it is today.

“Despite the fact that Trump is a largely incompetent clown, Democrats should not be overly confident or sanguine that they can beat him,” said Dan Pfeiffer, a top aide to former President Barack Obama. “He is a slight favorite to win. But he barely won last time and it took a Black Swan series of events to make that happen. All Democrats have to do is flip 100,000 or so votes in three states to win and that’s a very doable thing.”
at January 14, 2020