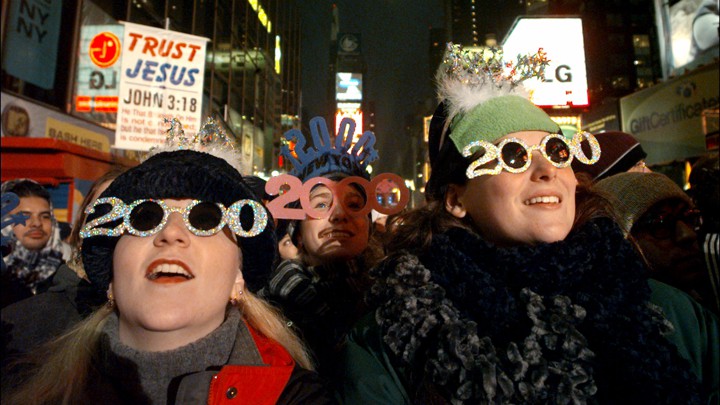 Of the many things worth arguing about in America, the number of years that constitute a decade is probably not among them. The word quite literally means “10 years.” But consider historical time, often referred to in decade-based shorthand, and all of a sudden the clear concept of a decade gets blurrier.

Most decades in America have a corresponding social and cultural narrative that’s an uneasy fit in the actual calendar. The ’50s are often stereotyped as an era of postwar domestic prosperity, but the trends cited as proof, such as the growth of the suburbs, reach well into the ’60s. That decade, in turn, cannot tidily hold the massive shifts attributed to it. In her book San Francisco and the Long 60s, Sarah Hill makes the case for two definitions of the era—one spanning four years of counterculture and political upheaval ending in 1969, and another that persists to this day in American attitudes toward sex, drugs, and art. The ’80s, too, spilled over their borders, arguably terminating both politically and culturally circa the dissolution of the Soviet Union and the release of Nirvana’s Nevermind in late 1991.

These are “decades” in the spiritual sense—periods based not on measured time, but on shared temporal perception. In practice, these eras get generalized to calendar decades mostly out of convenience. “The ’60s” is easier to include in a sentence than “the years of intense hippie counterculture, the culmination of the civil-rights movement, and political upheaval over America’s controversial entrance into the Vietnam War, among other things.” And when you say “the ’60s,” people generally understand that that’s what you mean, even if the first five years are a better fit with the ’50s. Decades of temporal perception are rarely neat, and there’s nothing neat about 21st-century America.

The end of the 2010s might be upon us, at least based on the constraints of linear time and language. Let go of the restrictions of the calendar, though, and it’s a decade that never began in the first place, because the 2000s never really ended. Instead, whatever distinct era we’re in now has been going on for nearly 20 years as a single, lurid blur, shaped by a media landscape that has changed how Americans perceive and understand almost everything.

Overall, the 2000s began with the September 11 attacks and the explosion of reality TV. While the presidency had already changed hands—and changed parties—in the 2000 election, 9/11 helped surface and nurture the country’s enduring xenophobia and gave George W. Bush popular support for starting the still-ongoing wars in the Middle East. In the largely white American right wing, that xenophobia curdled into specific beliefs and policies as time wore on. First it found a home in the populist Tea Party and conspiracy theories about Barack Obama’s birthplace—both phenomena incubated online—and then turned into support for Donald Trump’s anti-immigrant campaign promises, which were a hit with right-wing websites and social-media groups. Three years into his presidency, Trump has turned back many of the progressive accomplishments of the Obama presidency before they had an opportunity to change the country more permanently, passing wealth-friendly tax cuts and weakening the Affordable Care Act. Other Obama-administration policies, such as high rates of deportation, aren’t different enough from those of his Republican bookends to make for a distinct era.

The year 2001 was when many things broke. Financially, that was the year the American mortgage began showing signs of trouble. In the four years that followed, home-equity extraction in the country would more than double as people took out more loans. From 2001 to 2007, American mortgage debt would also double. Culturally, the popularity of the first season of Survivor, which ended in the fall of 2000, pushed scores of reality shows into production the following year—and pushed American television off the reality-TV cliff, creating the initial conditions for how American fame would fundamentally change in the next 20 years. The first season of The Bachelor, for example, debuted in early 2002.

You might be tempted to cap the perceptual 2000s in late 2008, when Obama was elected president and the investment banks Lehman Brothers and Bear Stearns collapsed, taking down the housing market and much of the American economy with them. That collapse ended the tacky prosperity of the early 2000s, a period when the McMansion flourished, cheap gas fueled a love affair with giant SUVs, and pop culture was overrun with paparazzi shots of Paris Hilton and Lindsay Lohan falling out of Los Angeles nightclubs while wearing low-rise jeans and trucker hats. Meanwhile, Facebook was metastasizing beyond college students, sculpting the basic contours of the digital environment much of the world now lives in. In hindsight, the moment in 2007 when the pop princess Britney Spears cracked under the paparazzi glare, attacked a car with an umbrella, and shaved her head feels like foreshadowing of the cultural brink to come, when none of this would feel so innocent or breezy.

I’d urge you to resist the temptation. While the events of 2008 caused devastation for lots of regular Americans, the year did relatively little to reroute the country toward a more stable future or to change the way it is run. No one went to jail for cratering the American economy, and analysts have begun speculating that another housing bubble will soon burst and that another recession looms. Much of the xenophobia awakened in 2001 coalesced around resentment of Obama’s election, and its solidification into white-identity politics during the course of his administration often overshadowed the actual policies he enacted. Eventually, it grew into a force powerful enough to help elect Donald Trump. Reality TV may have lost some of its omnipresence, but America is still free-falling off that Survivor cliff; the format’s stars helped pave the way for the Instagram influencers and YouTubers that now dominate digital culture, inuring a generation to the idea that traditional talent is no longer a prerequisite for fame. Kim Kardashian, arguably America’s most famous woman, is a product of both reality stardom and the internet’s influencer economy.

Smartphones and social media have matured since 2008, but mostly as tools of what young Americans were already doing as rapidly as technology would allow it. Speedy Wi-Fi and the mid-2007 advent of the iPhone supercharged digital communication—and made it much more visible to older Americans—but the basics were in place far earlier, and hardly a product of some pivot made 10 years ago. Texting was a common mode of communication in my high school by 2003, and it spread easily among teens who had been primed in middle school by digital chat services such as AOL Instant Messenger. By the time I went to college in late 2004, kids who could afford the latest phones were already sending one another grainy camera-phone nudes. Facebook, which then required an email address from an approved university, landed at my school shortly after I moved into my freshman dorm. (And it wasn’t even the first popular social network—Friendster and MySpace had it beat in 2002 and 2003, respectively, and LiveJournal had been around since 1999.) It’s hard to look back at the past 20 years and argue convincingly that whatever is happening now hadn’t already started in the early 2000s.

What the proliferation of smartphones and social media has done, though, is unmoor people from the sense of linear time that might make the past 20 years easier to chop up into distinct eras—or easier to understand at all. Political and cultural dimensions can be endlessly debated, but the information ecosystem in which they now exist is what makes the era both indivisible and fundamentally different from anything that came before it. Algorithmic timelines mix links, photos, and words from days, months, or years ago with those from the past 30 seconds. The 9/11 attacks helped shape the way the internet covers breaking news, and now news cycles that might have taken days or weeks whiz by in hours, supplanted almost instantly by some other, weirder story. Even entertainment has broken from the rigid logic of time that once governed Americans’ ability to consume it: Netflix, Spotify, and DVRs have extricated us from television schedules, changed how movies are released, and shrunken the familiar album-promotion cycle for new music down to nothing.

Nothing ever gets totally resolved, but there’s always a next thing to move on to. Every few years, another Spider-Man remake is foisted on America, whether we like it or not, and clothing trends mostly look backward for inspiration from the end of the 20th century. Both the country and your brain are sprinting forward and spinning in circles simultaneously, so you shouldn’t feel bad for thinking that 2010, a year of which I have basically no memory, happened, like, 45 minutes ago.

Where we exit this carnival ride of an era is just as unclear. If Trump loses the 2020 election, whatever period we’re in now might end when his successor takes office. If he wins, cranks like me might look back from the future and amend the period’s end to when he took office in 2017. Time is most easily sliced up with the benefit of hindsight, but in America as the country’s residents now know it—anxious, isolated, and terminally online—it’s not clear that simply waiting will bring any answers or any clarity. It might not even seem like much time has passed at all.

We want to hear what you think about this article. Submit a letter to the editor or write to letters@theatlantic.com.
Posted by Ron Ernie at 20:37