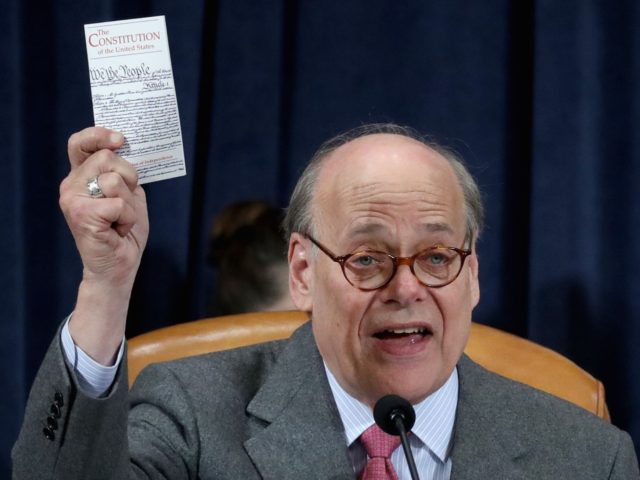 House Democrats violated the Bill of Rights in pursuing their impeachment inquiry against President Donald Trump. Republicans have pointed out that Democrats’ articles of impeachment, especially the second article charging “obstruction of Congress,” punish the president for obeying the Constitution’s checks-and-balances.

Yet Democrats have also violated the basic liberties protected by the
Bill of Rights
in the following four ways:

First Amendment: House Intelligence Committee Chairman Adam Schiff (D-CA), which led the impeachment inquiry, released a 300-page
report
in which he printed phone logs purportedly belonging to Ranking Member Devin Nunes (R-CA), presidential lawyer Rudy Giuliani, and journalist John Solomon. Schiff has never made clear what authority granted him the power to snoop on a journalist (among others) — a violation of freedom of the press.

Fourth Amendment: Schiff’s snooping on phone logs violated the protection against “unreasonable searches and seizures.” As the Wall Street Journal‘s Kim Strassel has
noted
“Federal law bars phone carriers from handing over records without an individual’s agreement.” There are exceptions for legitimate law enforcement investigations, but there is no exception for lawmakers, and Schiff’s inquiry had no law enforcement purpose; no crime was alleged.

Fifth Amendment: President Trump was denied the due process rights guaranteed to his predecessors in prior impeachment inquiries. Unlike Presidents Richard Nixon and Bill Clinton, for example, he was denied legal representation in the fact-finding stage of the inquiry. He was also
told
at the outset that any effort to invoke constitutional rights or privileges would itself be considered further evidence of an impeachable offense.

Sixth Amendment: Democrats violated the president’s right to counsel when they snooped on Giuliani’s phone records, even making a public record of his conversations with the White House, potentially violating attorney-client privilege. Moreover, by refusing to allow the so-called “whistleblower” to testify — and silencing questions about the “whistleblower” — Democrats denied Trump the right to confront his accuser before being impeached.

Democrats have argued that at least some of these rights only apply in a criminal trial, not an impeachment inquiry — and that if they were to apply to impeachment, it would only be in the trial phase, in the Senate, not in the House.

But impeachment — as Democrats have themselves argued — is itself a sanction that is meant, in their view, to deter misconduct. It is a penalty in and of itself, and the president is therefore
entitled
to
all
constitutional
protections!


Joel B. Pollak is Senior Editor-at-Large at Breitbart News. He earned an A.B. in Social Studies and Environmental Science and Public Policy from Harvard College, and a J.D. from Harvard Law School. He is a winner of the 2018 Robert Novak Journalism Alumni Fellowship. He is also the co-author of
How Trump Won: The Inside Story of a Revolution,
which is available from Regnery. Follow him on Twitter at
@joelpollak.
at December 17, 2019