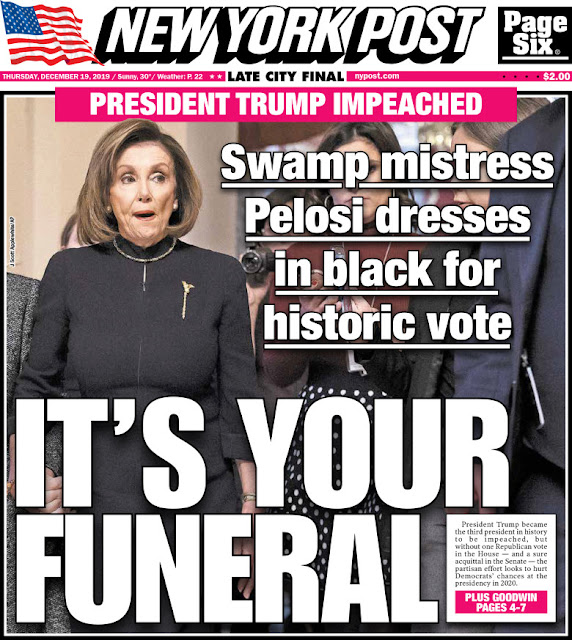 It is said there are two things you should never watch being made: sausage and government budgets.

Now we can add impeachment to the list of stomach-turning sights to avoid.

The arcane rules, phony cordiality and debates over the second sentence in paragraph G of Point Six were bad enough, but the nausea meter hit the roof when Nancy Pelosi took the microphone. Wearing a funereal black dress, she stood next to a cardboard American flag and recited the Pledge of Allegiance.

I would have counted her more honest if she had pledged her allegiance to a Democratic donkey.

As the leader of a party that has marinated its mind in unadulterated hatred of President Trump, Pelosi bears unique responsibility for this calamity. She could have stopped it.

Indeed, for months she did. Soon after Democrats took the House in last year’s midterms, the asinine calls for impeaching Trump that began immediately following his 2016 election reached a level she could not ignore.

Publicly and privately, Pelosi repeatedly and wisely said no, arguing it would tear America apart unless there was a bipartisan consensus.

“Impeachment is so divisive to the country that unless there’s something so compelling and overwhelming and bipartisan, I don’t think we should go down that path,” she told the Washington Post in March.

The smart bet was that she expected special counsel Robert Mueller to deliver the goods on collusion that would push the public and members of the GOP into the impeachment camp. Then she would be all in.

But Mueller came up empty, and at first blush, it seemed his finding of no collusion in April would be the end of it. The cloud over Trump was lifted and surely Washington would get back to a normal level of partisanship.

It was not to be, with the end of Mueller only temporarily quieting the Dems’ clamor. By early June, the pressure was growing again, with more than 50 of Pelosi’s members openly agitating for impeachment, and many others in silent agreement. They didn’t have honest cause, just raw hatred.

“I don’t think there’s anything more divisive we can do than to impeach a president of the United States, and so you have to handle it with great care,” Pelosi told CNN on June 16. “It has to be about the truth and the facts to take you to whatever decision has to be there. It should by no means be done politically.”

Behind the scenes, the intra-party civil war raged, with the most virulent Trump haters twisting the arms of those who merely disliked him. The latter group included many of the 31 freshman Dems elected in 2018 in districts Trump had carried in 2016.

It is worth noting there is more than a little irony in their victory, which took place during the height of the Russia, Russia, Russia scare. Dems, with the help of a biased media, pointed repeatedly to anonymous leaks suggesting Mueller would reveal Trump to be a traitor, making it the greatest scandal in national history.

It all turned out to be a “bogus narrative,” as Attorney General Bill Barr calls it, but the Trump-traitor narrative was very helpful to Dem candidates at the time. The midterms might have turned out differently had Mueller finished earlier or never been appointed.


At any rate, by last Sept. 24, with the 2020 election fast approaching and her icy relationship with Trump now a bonfire, Pelosi suddenly flip-flopped on impeachment. Her ostensible reason centered on the unverified claims of an anonymous whistleblower regarding Trump’s phone call with the president of Ukraine. The call, she was assured by the media and Rep. Adam Schiff, would amount to a smoking gun.

It felt like a fill-in-the-blank speech, one she had on the shelf ready to go as soon as she had an excuse to use it.

Twenty-four hours later, Trump released the transcript of the Ukraine call and it was benign in comparison to her inflammatory accusation. If only Pelosi had waited another day.

But it was too late. Confident that she had the votes now that most if not all of the 2018 winners would be with her, she erased her previous red lines about bipartisanship, took the plunge — and plunged America into a nightmare that continues.

Watching the so-called debate Wednesday, I was struck by how the impeachers, desperate to inflate their base partisan passions into something noble, have cheapened our nation’s history and language.

They resembled Grade B actors performing for the cameras, their rehearsed references to oaths, prayers, the Founding Fathers, the rule of law, checks and balances and the Constitution itself all sounding contrived. Rather than reflecting actual gravitas, the words were trotted out to create the appearance of it.

That was consistent with Pelosi’s latest demand that her members stay “solemn” in public, so as not to give the impression that they were gloating and joyful. In other words, hide how you really feel so we can fool more people into joining us.

Only the damage to America is real.
Posted by Ron Ernie at 11:41