Mitch McConnell Threatens to Cancel Donald Trump’s Senate Trial if ‘Scared’ Nancy Pelosi Does Not Hand Over ‘Slapdash’ Articles of Impeachment – as Speaker Slams Him as a ‘Rogue Leader’ and President Gloats He Will Be Cleared by ‘Default’ December 19, 2019 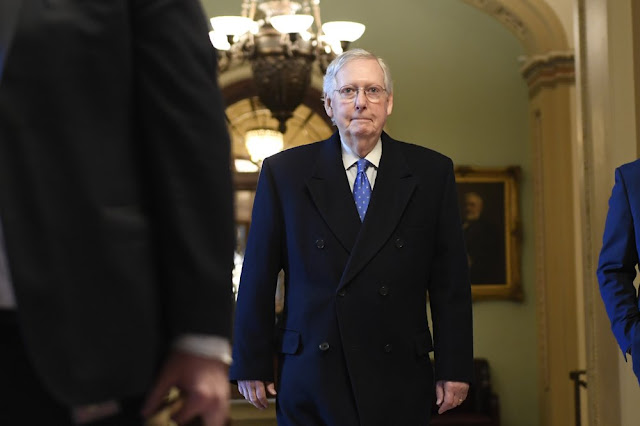 
refuses to send him the formal articles of impeachment that Democrats passed Wednesday night.


The Speaker of the House and the Senate Majority leader went to war over next steps in the impeachment process, with Pelosi slamming McConnell as a ‘rogue leader’⁠—and he blasted her indictment of the president as ‘slapdash’ and ‘unfair.’

The dispute exploded into the open the morning after Democrats voted to impeach Trump, with the president bragging he coulld prevaIl by ‘default.’

‘If the Do Nothing Democrats decide, in their great wisdom, not to show up, they would lose by Default!,’ Trump argued on Twitter of his upcoming Senate trial, which is now in doubt.

Pelosi has to transmit the articles of impeachment and appoint ‘managers’ to prosecute the president. She offered no timeline, saying she wanted to see the Senate’s plan for a ‘fair trial,’ effectively holding the articles over McConnell’s and Trump’s heads.

McConnell, who previously said he wanted to hold a trial in January, responded: ‘It’s beyond me how the Speaker and Democratic Leader in the Senate think withholding the articles of impeachment and not sending them over gives them leverage.’

‘Frankly, I’m not anxious to have the trial. If she thinks her case is so weak she doesn’t want to send it over, throw me into that briar patch.’

He and the president both blasted Pelosi for refusing to move to the next step, with Trump unleashing a storm of tweets and retweets and venting: ‘PRESIDENTIAL HARASSMENT.’

McConnell also criticized Democrats on the Senate floor, accusing them of creating what he called an ‘unfair, unfinished product’—Tcharges rump that stemmed from ‘partisan rage.’

Calling Pelosi’s work ‘constitutionally incoherent,’ he said impeaching a president on the basis of political disagreements would ‘invite an endless parade of impeachable trials’ in the future, making House leaders ‘free to toss up a jump-ball every time they feel angry.’

‘It was like the speaker called up Chairman [Jerrold] Nadler and ordered up “One impeachment, rushed delivery, please”.’

Pelosi herself held a press conference after McConnell spoke and offered no hint on when she would move.

‘Just to get this off the table right away, we impeached the president immediately and everybody was on to the next thing,’ she said.

‘The next thing will be when we see the process that is set forth in the Senate. Then we’ll know the number of managers that we may have to go forward and who we would choose.’

And she grew testy as reporters pressed her for more details on when the two articles of impeachment will end up on McConnell’s desk.

‘I’m not going to answer anymore questions on this. Clearly you understand when we see what their process is we will know who and how many we want to send over, not until then. I’m not going to go there anymore,’ Pelosi said.