Ringling Brothers Would Use This For A Side Show 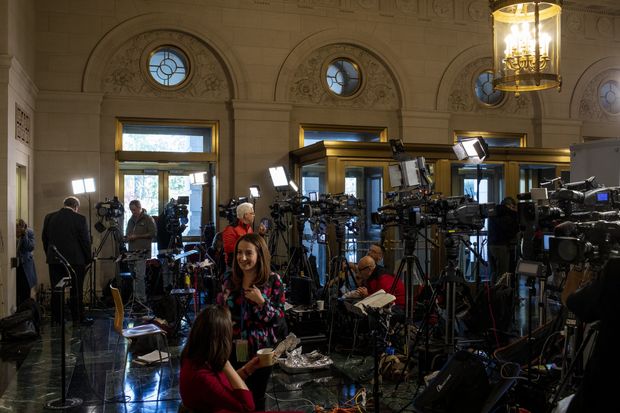 Television crews wait for the impeachment hearings to begin inside the Longworth building in Washington, D.C., on Wednesday. Photo: Jason Andrew for The Wall Street Journal

The atmosphere at the U.S. Capitol was part sober ceremony, part political carnival as the House’s impeachment inquiry held its first public hearing on Wednesday.

There were lawmakers who watched closely and those who made a point of skipping it. There was a self-described drag queen, and therapy dogs, and impeachment “junkies” who started lining up overnight in hopes of snagging one of the coveted seats inside the hearing room at the Longworth House Office Building. By midmorning, as Capitol Police prepared to open the doors, spirits were high.

Anne Coffelt, 68 years old, got in line at 6 a.m., determined to be among those allowed into the room to watch the testimony live. “It’s amazingly going to happen. I’m going to see history. Eyewitness to history, as they say,” she said, almost giddy.

“I came because it’s a historic moment in the history of this country,” said Ms. Coffelt, who flew from California for the hearing. “There was Andrew Johnson, there was [Bill] Clinton, there was [Richard] Nixon, and now there’s this experience,” she said, referring to the three other U.S. presidents who have been subject to impeachment proceedings. 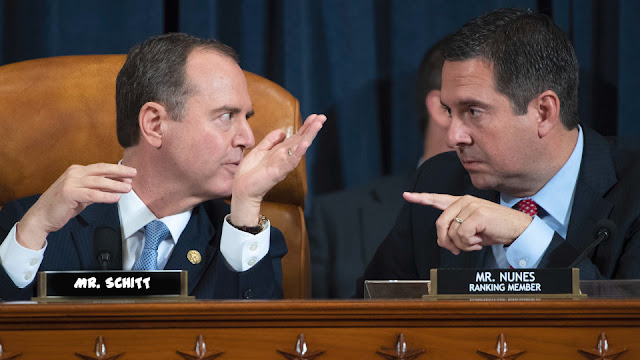 Ahead of Ms. Coffelt in line was Dwight Ritter, 68, an attorney who vividly remembers watching the Watergate hearings “gavel to gavel” in the 1970s. “Tried never to miss a minute of it,” he said.

Bill Condell, 58, a retiree, joined the line at 5:30 a.m. after biking from his home in northwest Washington. It was too early to take the Metro, which hadn’t opened yet, but for Mr. Condell, a politics enthusiast, this was his Super Bowl. Like his newfound friends Mr. Ritter and Ms. Coffelt, he was prepared to forgo food and bathroom breaks to keep his seat in the hearing, no matter how long it took.

“You know, people have their interest in sports, and so they go and attend games. People love art and they go to museums. I love following the ins and outs of politics,” Mr. Condell said. “Especially right now.”

Down the hall, a drag queen from the New York area drew curious looks. Pissi Myles, 31, had driven overnight to Washington to cover the hearing as special correspondent for Happs News, a live-streaming news program on Twitter and Periscope aimed at high school and college students.

“I got about an hour’s sleep last night, but I have a Red Bull in my bag and we’re going to power through this,” Ms. Myles said. “Gonna light a black candle and hope for the best.” 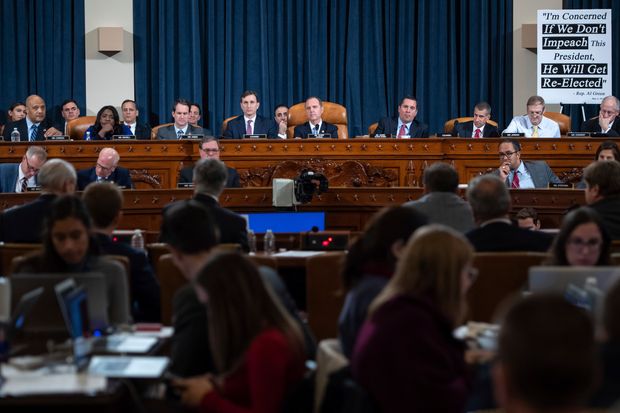 In many ways, business went on as usual on the Hill. Tourists wandered by. The House held hearings about the costs and production challenges of F-35 fighter aircraft, the “Youth Tobacco Epidemic” and the infrastructure needs of the Smithsonian Institutions.

On the Senate side of the Capitol, judicial nominees testified at their confirmation hearings, and lawmakers grilled government officials about lung illnesses and vaping. The Senate voted to confirm a new undersecretary for the Department of Homeland Security, Chad Wolf.

Many Democrats made an effort to catch the impeachment-hearing coverage whenever they could. Sen. Brian Schatz (D., Hawaii) said he was watching on his phone in between meetings. Sen. Tim Kaine (D., Va.) peeked in between hearings and votes, and tasked his staff with filling him in on any developments that he missed. He planned to go back to review the transcript or video of major testimony.

But some members of Congress—including Republicans who had called on House Democrats to open the impeachment investigation to the public—said they didn’t plan to watch much, if at all. “Oh, I’m actually working. I have a job. I just came from a hearing on vaping illness, voting,” said Sen. Rand Paul (R., Ky.).

Other Republicans said they couldn’t watch because they might need to be impartial jurors in an impeachment trial in the Senate. “Oh, absolutely not,” said Sen. Richard Shelby (R., Ala.). “I think that could prejudice my view.”

Behind closed doors, however, impeachment was the topic du jour for GOP senators at a private lunch on Tuesday. Republican senators asked Senate Majority Leader Mitch McConnell (R., Ky.) if they really had to have a trial. Mr. McConnell said they did. “There’s no way around that,” said Sen. Josh Hawley (R., Mo.).

For lawmakers and staff feeling stressed by the pressures of the day, there was some relief at hand in the form of cuddles with therapy dogs who were visiting the Hill with Pet Partners, a therapy-animal registration organization, and the Pet Industry Joint Advisory Council.

Mike Bober, the council’s president, said the dogs are nonpartisan. “I don’t think they care what your affiliation is,” Mr. Bober said. “We are a stress-free and politics-free zone, and I think people are appreciating that today.”

Natalie Andrews contributed to this article.

Write to Lindsay Wise at lindsay.wise@wsj.com
at November 14, 2019