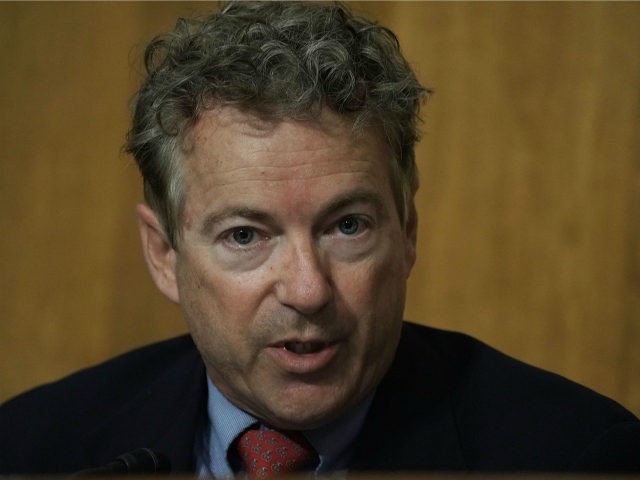 Sen. Rand Paul (R-KY) wished his fellow Americans a Happy Thanksgiving on Thursday and added a brief history lesson to his holiday message, reminding all that the first Thanksgiving “only happened when the pilgrims rejected socialism.”

“Happy Thanksgiving! Take this day to be thankful for friends and family and don’t forget the first Thanksgiving only happened when the pilgrims rejected socialism,” Paul tweeted alongside an article titled, “Why the Pilgrims Abandoned Common Ownership for Private Property”:

For the young men that were able and fit for labor and service did repine that they should spend their time and strength to work for other men’s wives and children, without recompense. The strong, or men of parts, had no more division of food, clothes, etc. then he that was weak and not able to do a quarter the other could; this was thought injustice. The aged and graver men to be ranked and equalized in labor, and food, clothes, etc. with the meaner and younger sort, thought it some indignant and disrespect unto them. And for men’s wives to be commanded to do service for other men, as dressing their meat, washing their clothes, etc. they deemed it a kind of slavery, neither could husbands brook it.

Bradford ultimately transformed their way of living, dismantling the communal structure and assigning each family a plot of land to tend to themselves, which he called a “very good success”:


And so assigned to every family a parcel of land, according to the proportion of their number for that end . . .This had a very good success; for it made all hands very industrious, so as much more corn was planted than otherwise would have been by any means the Governor or any other could use, and saved him a great deal of trouble, and gave far better content. The women now went willingly into the field and took their little ones with them to set corn, which before would allege weakness, and inability; whom to have compelled would have been thought great tyranny and oppression.

By this time harvest was come, and instead of famine, now God gave them plenty, and the face of things was changed, to the rejoicing of the hearts of many, for which they blessed God. And the effect of their planting was well seen, for all had, one way or other, pretty well to bring the year about, and some of the abler sort and more industrious had to spare, and sell to others, so as any general want or famine hath not been amongst them since to this day.

The Foundation for Economic Justice elaborated:

Communal socialist failure was transformed into private property/capitalist success, something that’s happened so often historically it’s almost monotonous. The “people over profits” mentality produced fewer people until profit—earned as a result of one’s care for his own property and his desire for improvement—saved the people.

“And the success and prosperity of the Plymouth settlement attracted more Europeans and began what came to be known as the ‘Great Puritan Migration.’” The word of the success of the free enterprise Plymouth Colony spread like wildfire and that began the great migration. Everybody wanted a part of it. There was no mass slaughtering of the Indians. There was no wiping out of the indigenous people, and eventually — in William Bradford’s own journal — unleashing the industriousness of all hands ended up producing more than they could ever need themselves.

So trading post began selling and exchanging things with the Indians — and the Indians, by the way, were very helpful. Puritan kids had relationships with the children of the Native Americans that they found. This killing the indigenous people stuff, they’re talking about much, much, much, much later. It has nothing to do with the first thanksgiving.

“Nothing wrong with being grateful to the Indians; don’t misunderstand. But the true meaning of Thanksgiving — and this is what George Washington recognized in his first Thanksgiving proclamation,” he added.
at November 28, 2019