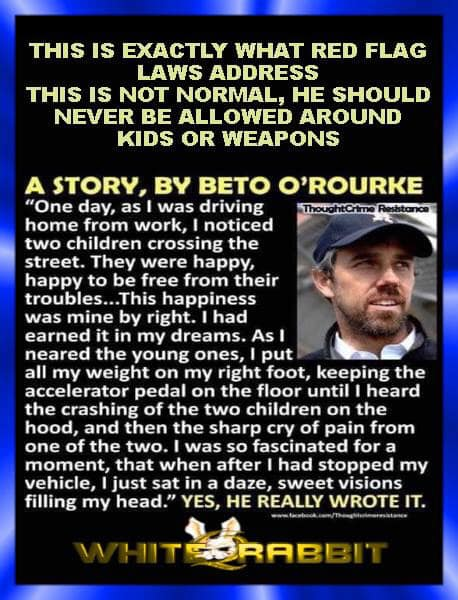 When Bernie Sanders was first asked about Beto O’Rourke entering the presidential race, his reply was dismissive: “Free country, anybody can run.” But others thought O’Rourke was a powerful new rival. The New York Times said that Sanders’ “stronghold on the party’s progressive wing has weakened” because he was now “outflanked on the left by rising stars” like O’Rourke. O’Rourke debuted with a splash: a long, flattering profile in Vanity Fair in which O’Rourke—to his later regret—said “Man, I’m just born to be in it.”

He was not, as it turned out, born to be in it.

After the initial burst of publicity, Beto fizzled quickly. His poll numbers never got out of single digits, and at first he didn’t seem to know what he stood for or why he stood for it. Eventually, he hit upon a signature issue: gun control. But his provocative rhetoric—“Hell yeah, we’re going to take your AR-15”—seemed to backfire entirely, and he was accused of “hurting the cause” and even “single-handedly dooming a gun control bill.” He continued to lack a following outside of Texas, a place where he could not even win a statewide election against the Senate’s most reviled member. Perhaps the only person who ever truly thought Beto O’Rourke was likely to be president was Beto O’Rourke.


What, if anything, can we take from the brief, underwhelming presidential run of Robert Francis O’Rourke? First, media hype does not a candidacy make. Jennifer Rubin of the Washington Post declared in March that “Beto fundraising number[s] suggests Bernie now officially yesterday’s news, faces stiff competition for youth vote.” Indeed, Beto initially hauled in an impressive amount. But things change quickly in politics; remember that Rudy Guiliani and Jeb Bush were both once Republican Party frontrunners. Horse race pundits like to issue declarations and prophecies, but are just speculating. Political media is in constant need of new stories to tell, so we get a lot of “Could Candidate X Be The Next Big Thing?” coverage. The sensible thing to do is ignore most of this. Beto-mania was never likely to grip the country.


We might also learn quite a simple lesson, namely that if you’re going to run for president, it helps to have a good reason for it. A reason beyond being “born to be in it,” that is. The Vanity Fair profile in which Beto debuted his national run was full of personal details about his life, such as his reading habits and his love of punk rock, but he didn’t say much about what he wanted to do as president, beyond having the United States “lead the world.” He also voiced uncertainty about being “against” things, saying he preferred to be “for” things, which is fine if you specify the things you’re for, but also a worrying sign that you’re insufficiently outraged by injustice. You’d think even Beto could have said he was against that, but he wouldn’t even go so far as to say he was a progressive, saying he “[didn’t] know” and was “not big on labels.”
at November 04, 2019