Democrat Dud! “It was a total disaster for us,” (SENIOR HOUSE DEMOCRAT AIDE) 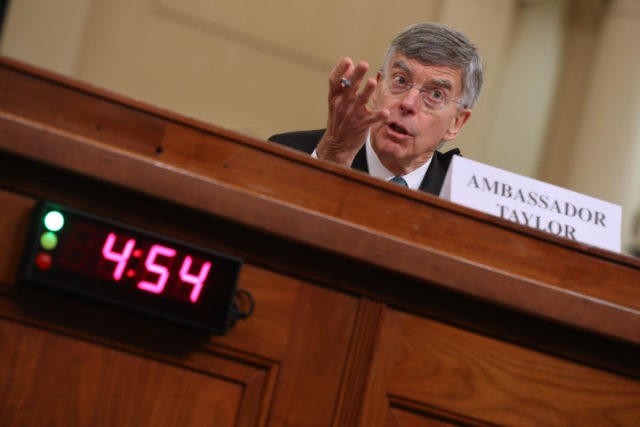 House Democrats’ first impeachment inquiry public hearing on Wednesday was widely panned as the two career diplomats who testified failed to offer clear allegations of wrongdoing against President Donald Trump, and Democrats running the show found themselves on defense in response to the Republicans in the minority who were aggressive and effective in pushing their counter-narrative.

“It was a total disaster for us,” one senior House Democrat aide told Breitbart News.

“Too complicated,” another Democrat aide said.

Wednesday marked the first public hearing of the Democrats’ formal impeachment inquiry into President Donald Trump. The hearing opened slowly, taking 93 minutes for the panel’s chairman Rep. Adam Schiff (D-CA) and its ranking member Rep. Devin Nunes (R-CA) as well as the two witnesses Bill Taylor and George Kent to get through their opening statements.

Taylor’s opening statement, which he read in its entirely, was 20-pages-long and contained lots of unclear background information. Kent’s, which was nearly as long and winding, contained numerous history lessons about Europeans helping Americans in the Revolutionary War.

The White House was clearly pleased with the lackluster performance by Democrats on Wednesday, as evidenced by two tweets from White House press secretary Stephanie Grisham:

A senior administration official told Breitbart News, too, that the Democrats have made a “colossal political mistake” by proceeding with this impeachment push despite the weakness of their case. While Republicans had been focused on process over substance, now with this first public hearing the White House believes the Democrats’ case has been “exposed” as being “extremely weak.”

“The White House is very upbeat about how the day went,” the senior administration official added, noting too that the Democrats’ star witnesses actually bolstered and strengthened White House and GOP arguments against impeachment by demonstrating there was no “quid pro quo” and that there is actual concern surrounding former Vice President Joe Biden’s son Hunter Biden’s position on the board of Ukrainian natural gas company Burisma Holdings. In fact, Kent–one of the witnesses Democrats thought was their strongest–literally testified that he warned the Obama administration about these matters and Hunter Biden and, when pressed further, referred a GOP lawmaker to Joe Biden’s team for more information.

The post-game press conferences confirmed how bad the first day was for Democrats, as Rep. Jim Jordan (R-OH)–who just joined the House Permanent Select Committee on Intelligence (HPSCI) for these hearings–ripped into the media and the Democrats.

“The facts are the facts, and you guys can talk about it all you want to–and the Democrats can do what they want,” Jordan said. “But the facts will not change. And I think the American people clearly see that.”

Schiff’s post-game press conference, however, did not go so well:

The Democrats do not seem to have moved any hearts or minds with Wednesday’s disjointed round one hearing, as evidenced by GOP unity at the end of the day, when Rep. Mike Conaway (R-TX) pushed to try to bring in the so-called “whistleblower” for testimony. The vote failed, but along party lines with all 13 of the committee’s Democrats voting against the effort and all nine Republicans voting for it.

Cramer said in a release:

These hearings are pointless.Today’s political theater in the House of Representatives is nothing more than an outward demonstration of their inward motivation to remove President Trump from office since the day he was elected. Democrats’ one-sided impeachment process is producing no persuasive substance; their only accomplishment is further dividing our country. It’s time for them to call it quits on this sham and to finally get to work on the important issues like passing USMCA, lowering prescription drug costs, and funding our nation’s military.

Nevertheless, despite the clear political loss on Wednesday, Schiff is persisting. The next hearings begin on Friday, and then next week there will be another round of public testimony.