By
ZEKE MILLER
29 minutes ago 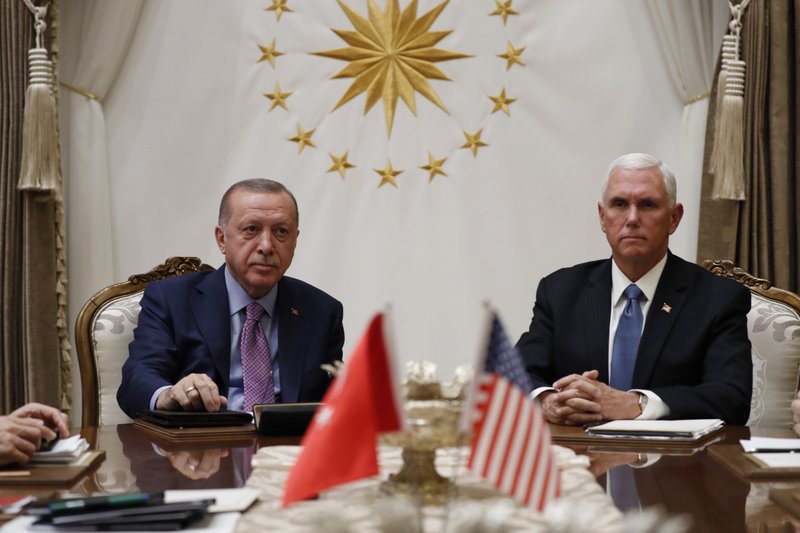 Pence and Erdogan wore dour expressions as they shook hands before a nearly 90-minute one-on-one meeting, and during an expanded bilateral meeting with the full delegations Thursday afternoon.

After hours of meetings it was not immediately clear if there was any movement toward a cease-fire.
Full Coverage: Syria

The U.S. officials were expected to warn Erdogan that he will face additional economic sanctions if he doesn’t halt his assault on Kurdish forces once allied with the U.S. in the fight against the Islamic State group.

President Donald Trump earlier spoke dismissively of the same crisis he sent his aides on an emergency mission to douse. The U.S. delegation’s visit came hours after Trump declared the U.S. has no stake in defending Kurdish fighters who died by the thousands as America’s partners against Islamic State extremists. 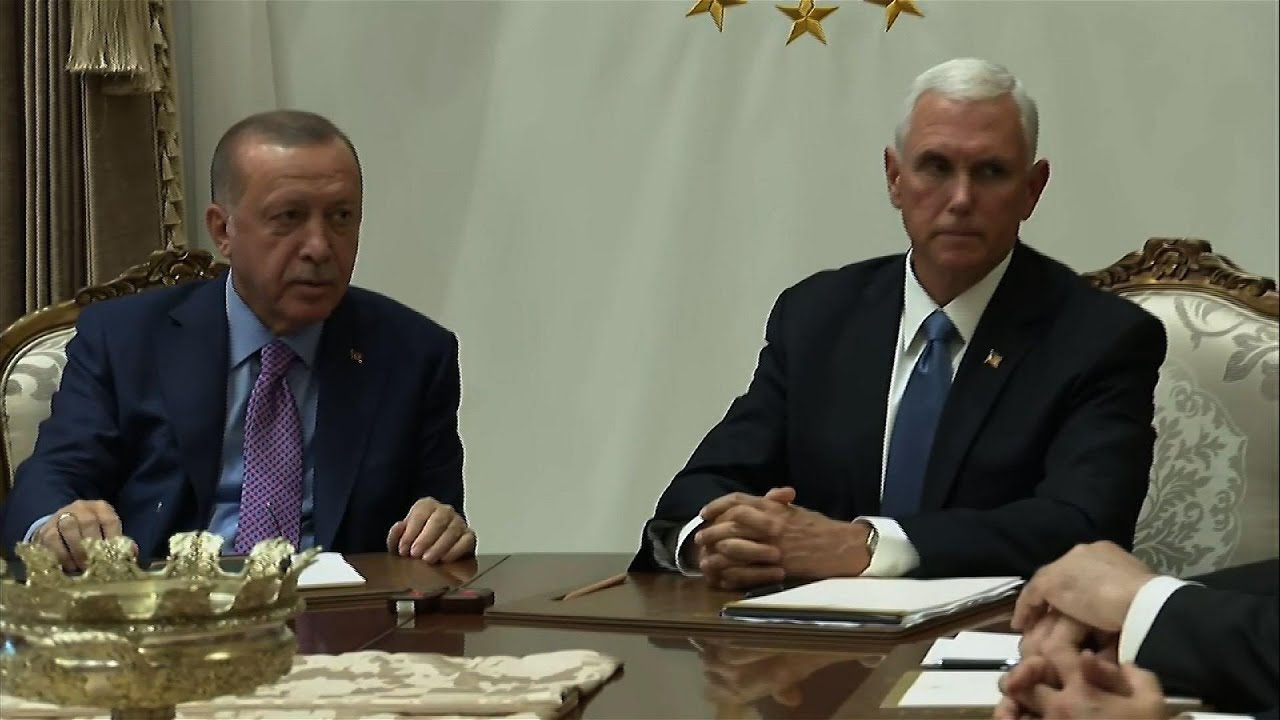 Trump suggested Wednesday that Kurdish fighters might be a greater terror threat than the Islamic State group, and he welcomed the efforts of Russia and the Assad government to fill the void left after he ordered the removal of nearly all U.S. troops from Syria amid a Turkish assault on the Kurds.

“Syria may have some help with Russia, and that’s fine,” Trump said. “They’ve got a lot of sand over there. So, there’s a lot of sand that they can play with.”

He added: “Let them fight their own wars.”

The split-screen foreign policy moment proved difficult to reconcile and came during perhaps the darkest moment for the modern U.S.-Turkey relationship and a time of trial for Trump and his Republican Party allies. Severe condemnation of Trump’s failure to deter Erdogan’s assault on the Kurds, and his subsequent embrace of Turkish talking points about the former U.S. allies, sparked bipartisan outrage in the U.S. and calls for swift punishment for the NATO ally.

Republicans and Democrats in the House, bitterly divided over the Trump impeachment inquiry, banded together Wednesday for an overwhelming 354-60 denunciation of the U.S. troop withdrawal. Many lawmakers expressed worry that the withdrawal may lead to revival of the Islamic State group as well as Russian presence and influence in the area, besides the slaughter of many Kurds.

“I’m sorry that we are where we are. I hope the vice president and the secretary of state can somehow repair the damage,” McConnell said Wednesday.

Even among top administration officials, there were concerns that the trip lacked achievable goals and had been undermined by Trump before it began. Planning for the trip first began late Monday after the two presidents spoke by phone, and details were still being sorted as the vice president landed in Turkey.

While Erdogan faces global condemnation for the invasion, he also sees renewed nationalistic fervor at home, and any pathway to de-escalation likely would need to delicately avoid embarrassing Erdogan domestically. The officials spoke on the condition of anonymity to discuss internal thinking.

The White House disclosed that Trump had both cajoled and threatened Erdogan in an unusual letter last week, urging him to act only in “the right and humane way” in Syria. The letter was sent the day Erdogan launched the major offensive against the Kurds.

Trump started it on a positive note by suggesting the two of them “work out a good deal,” but then talked about crippling economic sanctions and concluded that the world “will look upon you forever as the devil if good things don’t happen. Don’t be a tough guy. Don’t be a fool!”

Trump did place some sanctions on Turkey for the offensive. But he appeared to undercut his delegation’s negotiating stance, saying the U.S. has no business in the region — and not to worry about the Kurdish fighters.

As he sought to persuade Erdogan to agree to a cease-fire, Pence also confronted doubts about American credibility and his own, as an emissary of an inconsistent president.

“Given how erratic President Trump’s decision-making process and style has been, it’s just hard to imagine any country on the receiving end of another interlocutor really being confident that what Pence and Pompeo are delivering reflects Trump’s thinking at the moment or what it will be in the future,” said Jeffrey Prescott, the Obama administration’s senior director for Iran, Iraq, Syria and the Gulf states on the National Security Council. He is also a former deputy national security adviser to former Vice President Joe Biden.

The U.S. withdrawal is the worst decision of Trump’s presidency, said Sen. Lindsey Graham, R-S.C., who meets often with the president and is one of his strongest and most important supporters in Congress.

Even before Trump’s comments, Erdogan had stated on Wednesday that he would be undeterred by the sanctions. He said the fighting would end only if Kurdish fighters abandoned their weapons and retreated from positions near the Turkish border. If Pence can persuade Turkey to agree to a cease-fire, which few U.S. officials believed was likely, experts warn it will not erase the signal Trump’s action sent to American allies across the globe or the opening already being exploited by Russia in the region.

Turkish troops and Turkish-backed Syrian fighters launched their offensive against Kurdish forces in northern Syria a week ago, two days after Trump suddenly announced he was withdrawing the U.S. from the area.

Ankara has long argued the Kurdish fighters are nothing more than an extension of the Kurdistan Workers Party, or PKK, which has waged a guerrilla campaign inside Turkey since the 1980s and which Turkey, as well as the U.S. and European Union, designate as a terrorist organization.