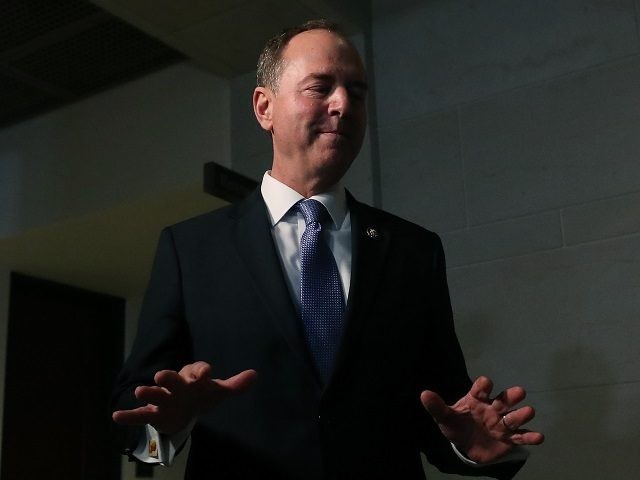 We have impeachment witnesses testifying in secret. We have transcripts of that testimony kept secret. We have Democrats refusing to allow Republicans to question a secret (fake) whistleblower. We have selective leaks of this secret testimony. We have the ringleader behind all of this, Rep. Adam Schiff (D-CA), secretly conspiring with the fake whistleblower. And all of this is occurring within the framework of overturning a presidential election.

There is no way a legitimate media would ever be okay with any of this.
Throughout this entire Ukraine Hoax, Schiff has lied to the media, misled the media with selective leaks, over-promised on supposed bombshells — like what we would learn from the Ukraine call transcript that ended up being a big dud — and Schiff is right now working in the kind of partisan secrecy that literally reeks of a banana republic. And still…

How did our media become so corrupt and so un-American that they are facilitating this secret coup attempt, not only with their silence in the face of this unprecedented secrecy, but with propaganda-nonsense about how dangerous it would be for the whistleblower to be identified.

We all know why Democrats and the media want the whistleblower to be allowed to hurl rocks and tomatoes from behind a mask… This removes the right of the accused to question the motives and integrity of his accuser. Imagine if we had never met Julie Swetnick and Christine Blasey Ford, the two liars who accused then-Supreme Court Nominee Brett Kavanaugh of sexual assault. Without the opportunity to question them and learn about their histories, the phony charges they leveled probably would have brought Kavanaugh down.

That’s what Democrats want to avoid, and no one can blame them. Politics is tough stuff. I get that…

But what we are seeing from the media is a total abdication of every journalistic standard as they defend the secret proceedings behind a presidential coup orchestrated by a man who has made a cottage industry out of lying to the media about having the goods on Trump.

Can you imagine Chuck Todd and Jake Tapper, or anyone else who pretends to be a journalist, if some anonymous whistleblower downloaded on Barack Obama and Republicans responded with secret hearings where Democrats were not even allowed to question the accuser?

Can you imagine Republicans holding secret impeachment proceedings to take down Obama using secret testimony? The media would literally be on television jumping up and down on their desks demanding transparency.

And they would be 100 percent right.

But we no longer have a media.
All we have is a mob of coup plotters frustrated as hell over the failure of the Russia Collusion Hoax, backed by billions of corporate dollars, and who are willing to do everything in their sinister power to facilitate the removal of a duly elected president in almost total secrecy, willing to be serially lied to by an Adam Schiff, willing to violate every norm that makes our Constitution, our judicial and political system the envy of the world … just to get Drumpf.
at October 09, 2019