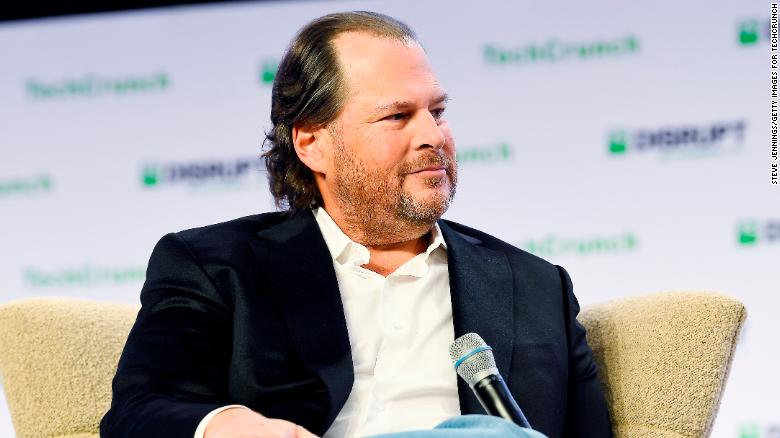 New York (CNN Business)Salesforce (CRM) CEO Marc Benioff hasn't been sparing with his criticism of Facebook.
But in an interview with CNN's Poppy Harlow Wednesday he went one significant step further and added his name to the list of those who support breaking up the social media giant.
"It's addictive, it's not good for you, they're after your kids, they're running political ads that aren't true ... and they're also acquiring other companies and co-mingling [data those companies have on their users] into theirs," Benioff said, referencing Facebook (FB)'s acquisitions of Instagram, WhatsApp and other tech platforms. "And I think at that point, because they're now doing that, that they probably should be broken up. Because they're having an undue influence as the largest social media platform on the planet," he said.
Despite being the head of a massive Silicon Valley company himself, Benioff is known for his sharp critiques of leadership styles in the technology industry and has not shied away from calling out his peers, especially at Facebook. In his interview with Harlow, he also went after a bit of US law, Section 230 of the Communications Decency Act, that has enabled the internet to become what it is today by protecting platforms from certain liabilities.

Benioff is on a media tour for his new book "Trailblazer," published Tuesday, which centers on what he says is the need for today's CEOs to consider returns not just for shareholders, but for all stakeholders in their companies, including customers and employees.

The question of whether Facebook is a monopoly that should be broken up has become an increasingly frequent topic of conversation, especially on the 2020 campaign trail. Facebook and fellow tech giants Google (GOOG), Amazon (AMZN) and Apple (AAPL) have been at the center of a recent effort by regulators to evaluate whether big tech companies are violating antitrust rules.

For its part, Facebook has said that breaking it and other tech companies up would only make it harder for those companies to tackle pressing issues on their platforms such as election interference. Facebook declined to comment on Benioff's remarks. 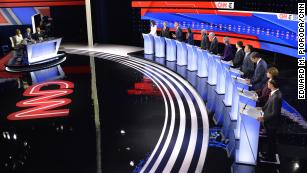 Benioff first called out Facebook at the World Economic Forum in Davos in 2018, at which he likened the platform to "cigarettes." After that comment, Benioff said, he got a call from Facebook COO Sheryl Sandberg.

He declined to comment to CNN on the specifics of his conversation with Sandberg, but said he has essentially the same message every time he talks to other CEOs, the same one he has for customers and employees.
"We're in a world where very advanced technologies are at our fingertips, and where we can do magical things," Benioff said. "But that also means that trust must be our highest value. And you have to ask yourself: Is trust your highest value? If it's not your highest value, then what is it?"
Benioff said seeking higher levels of trust with consumers is "the most important thing in the industry today. Period."
In particular, Benioff took issue with Facebook's recent decision to run political advertisements from the Trump campaign which contain false claims. Benioff said there is "no question" that he would not run such advertisements if he were the head of Facebook, and called on Congress to pass legislation that would require truthful advertising on social media platforms.
"I think this is extremely important in the age of social media, because they have the information of who those persuadables are, and various political organizations are targeting those groups," he said. "That's the insight from the 2016 election. It's a very vulnerable moment right now."
One of the reasons tech platforms are able to publish such content without consequences is the law typically shorthanded as Section 230, which allows internet platform providers to moderate some content without fear of being held liable for most of what users do on their platforms.
Benioff called Section 230 "the most dangerous law on the books right now," and said it should be "abolished."
"On these platforms, it's well documented what's happening," he said. "And this cannot continue. It is deeply affecting our society."
at October 16, 2019