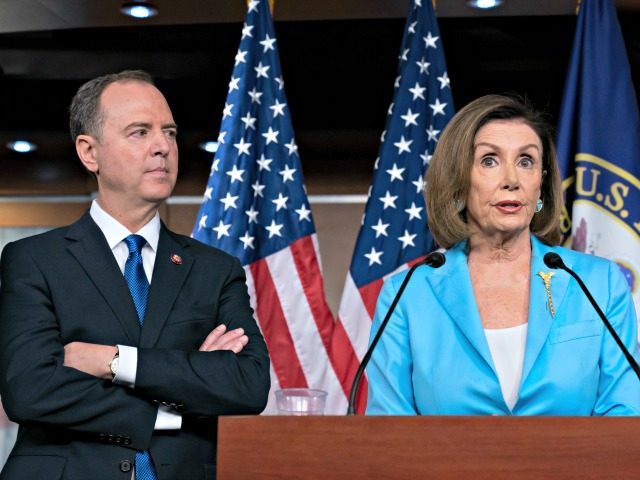 House Democrat leaders pursuing the investigation are intent on pushing Trump out of office by any means necessary, Republican lawmakers and the White House argued.

House Democrats have carried out the entire process behind closed doors since the beginning of the impeachment inquiry last month.

The Democrats have even refused to hold a full House vote on authorizing an impeachment inquiry, just as lawmakers did when Congress opened investigations with Presidents Richard Nixon and Bill Clinton.

Trump’s supporters in Congress argue that such a vote is necessary to legitimize the inquiry per the recognized standards of previous impeachment efforts and to give Republicans certain rights in the process, such as the ability to issue subpoenas for witnesses.

The White House challenged House Democrats in an October 8 letter to the Speaker and committee chairmen pursuing the impeachment inquiry.

The White House argued it would not cooperate in the ongoing impeachment investigation and dismissed the proceedings as a mock court focused on overturning the 2016 election results.

Witnesses called to testify in the so-called impeachment inquiry so far have done so in closed sessions with lawmakers.

Republicans have accused House Democrats of cherry-picking and mischaracterizing evidence, and refusing to release information they say obliterates their accusations of wrongdoing.

House Democrats last week leaked text messages provided by one of the witnesses, former U.S. special envoy to Ukraine Kurt Volker, that appeared damaging to the president, but Republicans said the release of the entire transcript of Volker’s remarks would disprove their allegations.

House Freedom Caucus Chairman Andy Biggs (R-AZ), slammed the Democrats for holding “secret hearings” and called on them to release the transcript of Volker’s testimony:

After claiming for more than two years that Donald Trump colluded with the Russians to influence the 2016 election, Adam Schiff and his band of Democrats are back to their old tricks of manufacturing evidence to fit their narrative. This time, however, they are holding secret hearings to prevent the American people from learning the facts and deciding for themselves.

They have leaked portions of the transcript and select documents from the Volker deposition in a desperate attempt to deceive the country. The American people deserve transparency, and we are calling on these chairmen to immediately deliver the full and complete transcript immediately.

The president on Tuesday announced that he would not let Ambassador Gordon Sondland testify to Congress later that day as scheduled.

Rep. Lee Zeldin (R-NY), a supporter of the president, called the inquiry a “kangaroo court” and a “clown show”:

As far as the administration goes, if they don’t want to send Amb. Sondland here because this is a kangaroo court, because there has not been a vote once on impeachment inquiry, because minority does not have any rights for subpoenas, because the president doesn’t have the right to have counsel present to ask questions, for subpoena power, to present evidence. This entire thing is a political charade. It’s a clown show.

“What we see in this impeachment is a kangaroo court, and Chairman Schiff is acting like a malicious Captain Kangaroo,” he said.

House Democrats have also denied President Trump’s counsel the ability to attend depositions, briefings, and interviews. It is also unclear whether or not the president’s counsel will be permitted to object to testimony or introduce evidence.

House Democrats are also considering having the first official who filed a whistleblower complaint against Trump testify remotely with his face and voice obscured so that Republican lawmakers and staffers would not be able to find out his identity.

A lawyer for the whistleblower told Breitbart News on Tuesday that the official, or any others they represent, do not intend to come forward publicly, raising the prospect that an impeachment inquiry of Trump would be prompted entirely by an anonymous official who is reportedly a Democrat and had a working relationship with a 2020 Democrat candidate.

The mainstream media has downplayed or flat out ignored that the impeachment proceedings have not met the recognized standards of other similar efforts.

The Democrat-led House Committees on Oversight and Reform, Intelligence, and Foreign Affairs are pursuing the impeachment of Trump.

Schiff and the chairmen of the other two panels argue that Trump attempted to coerce Ukraine into investigating Joe Biden and his son in exchange for foreign aid, a claim denied by the U.S. president.
at October 09, 2019