By
DANICA KIRKA
and
CHRISTOPHER BODEEN
37 minutes ago 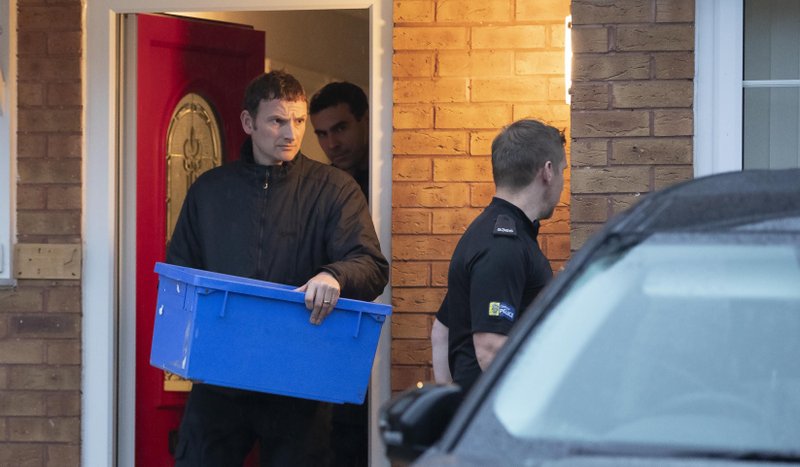 Police leave the home of Joanna and Thomas Maher with an evidence box at Wiltshire close in Warrington, Cheshire, Friday, Oct. 25, 2019, after a man and a woman, both aged 38 and from Warrington, have been arrested on suspicion of manslaughter and conspiracy to traffic people in connection with the 39 bodies found in a lorry in Essex on Wednesday. (Jason Roberts/PA via AP)


LONDON (AP) — A fourth person was arrested in connection with the deaths of 39 people found in the back of a container truck in southeastern England, British police said Friday as the investigation into one of the country’s worst human smuggling cases geared up.

Police said a 48-year-old man from Northern Ireland was arrested Friday at England’s Stansted Airport on suspicion of manslaughter and conspiracy to traffic people. The arrest came after police arrested a man and a woman, both 38 and from northwestern England, earlier Friday on the same charges. The 25-year-old driver of the truck remains in custody on suspicion of murder.

Essex Police said 31 men and eight women were found dead in the truck early Wednesday at an industrial park in Grays, a town 25 miles (40 kilometers) east of London. Although U.K. police said they believed the dead were Chinese citizens, they acknowledged Friday this was a “developing picture.”

China said it could not yet confirm the victims’ nationalities or identities.

The Vietnamese Embassy in London said Friday that it contacted police about a missing woman feared to be one of the dead. An embassy spokesman said it was contacted by a family in Vietnam who says their daughter had been missing since the truck was found.

The BBC reported it had been in contact with six Vietnamese families who feared their relatives are among the victims. Relatives of 26-year-old Pham Tra My told the broadcaster they had been unable to contact her since receiving a text Tuesday night saying she was suffocating.

Hua said Chinese authorities were also seeking information from police in Belgium, since the shipping container in which the bodies were found was sent to England from the Belgian port of Zeebrugge.

Human smuggling from China is believed to have fallen drastically in recent years amid the country’s rapidly growing domestic economy. However, some Chinese, particularly those with lesser education, continue to be drawn to Europe and North America by the promise of much higher wages than they can earn at home, despite the considerable risks involved.

Parts of China, especially the southeastern province of Fujian, have long histories of sending migrants abroad.

The issue is a difficult one for China’s ruling Communist Party, which is intensely sensitive about China’s international image and has staked much of its legitimacy to rule on improving living standards for the bulk of China’s 1.4 billion people.

In an editorial Friday, the party newspaper Global Times said authorities in Britain and elsewhere hadn’t done enough to crack down on people smuggling.

“Such a serious humanitarian disaster occurred under the eyes of the British and Europeans,” the newspaper said. “Britain and the related European countries have not met their responsibility for protecting these people from dying in such a manner.”

British police believe the truck and container took separate journeys before ending up at the industrial park. They say the container traveled by ferry from Zeebrugge to Purfleet, England, where it arrived early Wednesday and was picked up by the truck driver and driven the few miles to Grays.

The truck cab, which is registered in Bulgaria to a company owned by an Irish woman, is believed to have traveled from Northern Ireland to Dublin, where it caught a ferry to Wales, then drove across Britain to pick up the container.

Groups of migrants have repeatedly landed on English shores using small boats to make the risky Channel crossing, and migrants are sometimes found in the back of cars and trucks that disembark from the massive ferries that link France and England.

But Wednesday’s macabre find in an industrial park was a reminder that criminal gangs are still profiting from large-scale trafficking.

The tragedy recalls the deaths of 58 Chinese migrants who suffocated in a truck in Dover, England, in 2000 after a perilous, months-long journey from China’s southern Fujian province. They were found stowed with a cargo of tomatoes after a ferry ride from Zeebrugge, the same Belgian port featured in the latest tragedy.

In February 2004, 21 Chinese migrants — also from Fujian — who were working as cockle-pickers in Britain drowned when they were caught by treacherous tides in Morecambe Bay in northwest England.

Bodeen reported from Beijing. Raf Casert in Brussels and Shanshan Wang in Beijing contributed.
at October 25, 2019