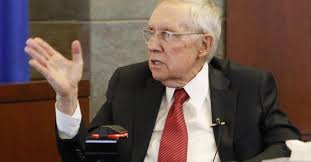 While discussing the upcoming presidential elections, former Democratic Senate Majority Leader Harry Reid warned Democrats that Donald Trump is “very, very smart” while noting that the president won’t be easy to defeat in 2020.

“I used to think that Donald Trump was not too smart. I certainly don’t believe that anymore,” said Reid during an appearance on CNN’s Axe Files with David Axelrod on Saturday.

After calling Trump a “con artist” and “human leech” trying to “bleed the country” dry, Reid added, “I don’t think he’s, intellectually, a powerhouse but he is basically a very, very smart man. No matter what the subject, any argument he involves himself in, it’s on his terms. You’re always arguing against him. He never, never, is willing to debate an issue on terms that aren’t his.”

The former Nevada lawmaker went on to sternly advise Democrats against underestimating the president: “Anyone that thinks Trump’s going to be beaten easily should have another thing coming.”

He also called out Republicans in Congress who stay silent on Trump’s wrongdoings, scandals, and disastrous policy decisions, saying, “We have these Republicans who are afraid to speak out against things that he does that are absolutely wrong and they know they’re wrong.”

“The only person we’ve gotten to say anything is [Sen.] Mitt Romney, and [Sen. Ben] Sasse has said something out of Nebraska. Other than that, they don’t say anything,” he continued.

Romney has routinely criticized Trump amid the White House’s recent Ukraine whistleblower scandal, but he has shrugged off calls for impeachment.

“I will keep an open mind until and unless there is some kind of decision reached by the House, and then I will evaluate that information at that point,” the Utah Republican said over the weekend. “It’s a purposeful effort on my part to stay unbiased and see the evidence as it’s brought forward.”

Sasse has been less overt in condemning the president calls for Ukraine to target his political rival Joe Biden, as he instead opted to speak in hypotheticals during an interview with the National Review regarding his thoughts on House Democrats’ ongoing impeachment inquiry: “American elections should be for Americans. And the idea that we would have foreign nation-states coming into the American electoral process, or the information surrounding an election, is really, really bad.”


Have a tip we should know?
tips@mediaite.com