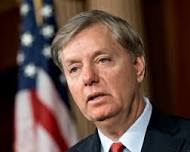 President Trump and his GOP allies on Capitol Hill have lashed out at how House Democrats are handling the impeachment inquiry, arguing they should hold a vote to formally launch the investigation.

House Speaker Nancy Pelosi (D-Calif.) has argued the rules don't require a vote. But Republicans say it would give them more leeway to call their own witnesses and put swing-state Democrats on the record on launching the impeachment inquiry.

Graham added on Tuesday night that Trump should get "the same rights that any American has if you’re giving a parking ticket to confront the witnesses against you: can’t be based on hearsay."

“We cannot allow future presidents and this president to be impeached based on an inquiry in the House that’s never been voted upon, that does not allow the president to confront the witnesses against him, to call witnesses on his behalf, and cross-examine people who are accusing him of misdeeds,” he added.

The House is holding near-daily closed-door depositions with current and former administration officials as part of their inquiry focused on Trump asking Ukraine to investigate the Bidens and whether he held up aid to try to pressure the country. The inquiry is being overseen by the House Intelligence, Foreign Affairs, and Oversight and Reform Committees.

Senate Majority Leader Mitch McConnell (R-Ky.) sidestepped when asked about how long a potential Senate trial would last, telling reporters during a weekly press conference that "there are all kinds of potentials and we don't have it yet."

Graham's plan for a resolution comes after he said earlier this month that he was going to send a letter to Pelosi warning that Senate Republicans wouldn't remove Trump from office over the Ukraine phone call.

But the plan got pushback from some of Graham's GOP colleagues during a closed-door lunch last week.

Graham appeared to signal on Tuesday night that he had changed his mind about the letter.

"It's going to be a resolution," Graham said when Hannity mentioned the letter. "I hope to have a vote on it. It would be great to have 100."