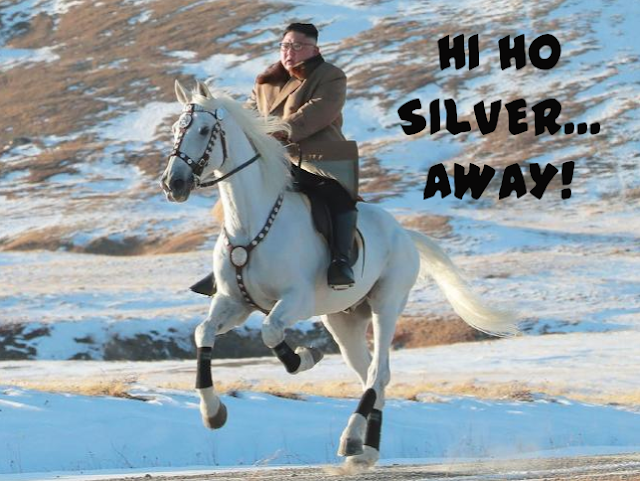 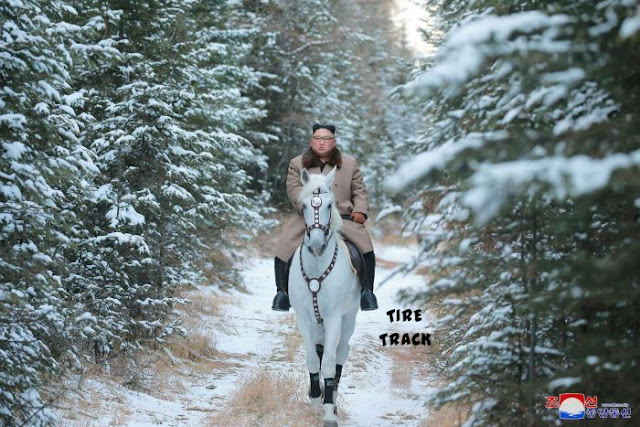 Wonder How Lone Stranger And Silver Got Up There?

SEOUL, Oct 16 (Reuters) - Aides to Kim Jong Un are convinced the North Korean leader plans "a great operation", state media said on Wednesday in a report that included lavish descriptions and images of the leader riding a white horse up North Korea's most sacred mountain.
In the photos released by state news agency KCNA, Kim is seen riding alone on a large white horse through snowy fields and woods on Mt Paektu, the spiritual homeland of the Kim dynasty.
"His march on horseback in Mt Paektu is a great event of weighty importance in the history of the Korean revolution," KCNA said.
"Having witnessed the great moments of his thinking atop Mt Paektu, all the officials accompanying him were convinced with overflowing emotion and joy that there will be a great operation to strike the world with wonder again and make a step forward in the Korean revolution."
It was unclear what the operation might involve, but Kim has often made trips to the sacred mountain at times of major policy endeavours
Analysts say the symbolism underscores North Korea standing up to international sanctions and pressure over its nuclear weapons and ballistic missile programmes.
"This is a statement, symbolic of defiance," said Joshua Pollack, a North Korea expert at the Middlebury Institute of International Studies in California. "The pursuit of sanctions relief is over. Nothing is made explicit here, but it starts to set new expectations about the coming course of policy for 2020."
In late 2017, Kim visited Mt Paektu days after North Korea launched its largest intercontinental ballistic missile, and weeks before he made a key New Year's speech in which he opened the door to engagement with South Korea.
Last year, Kim took South Korean President Moon Jae-in to the top of the mountain as part of a historic summit.
Since then relations have cooled and Kim has said he will only wait until the end of the year for the United States to soften its stance in denuclearisation negotiations before North Korea will pursue an unspecified new path forward.
Several experts said much of the rhetoric in the KCNA report revolves around the economy, and they suspect North Korea may soon conduct a space launch. That would enable the North to show of its economic and technological power in a less provocative way than by testing an ICBM.
The language in Wednesday's state media report suggests Kim may be "contemplating some major policy decisions," said Rachel Minyoung Lee, an analyst with NK News, a website that monitors North Korea.
"The report in Korean has characterized Kim's climb up to Mt Paektu on horseback as a new ‘myth', and that, together with the images of him on a white horse, appear to have been designed to create maximum propaganda effect, which I believe media will play up in the days to come," Lee said. (Reporting by Josh Smith. Editing by Lincoln Feast.)

Email ThisBlogThis!Share to TwitterShare to FacebookShare to Pinterest
Labels: Rondoids, The Lone Stranger