Clinton’s impeachment barely dented his public support, and it turned off many Americans 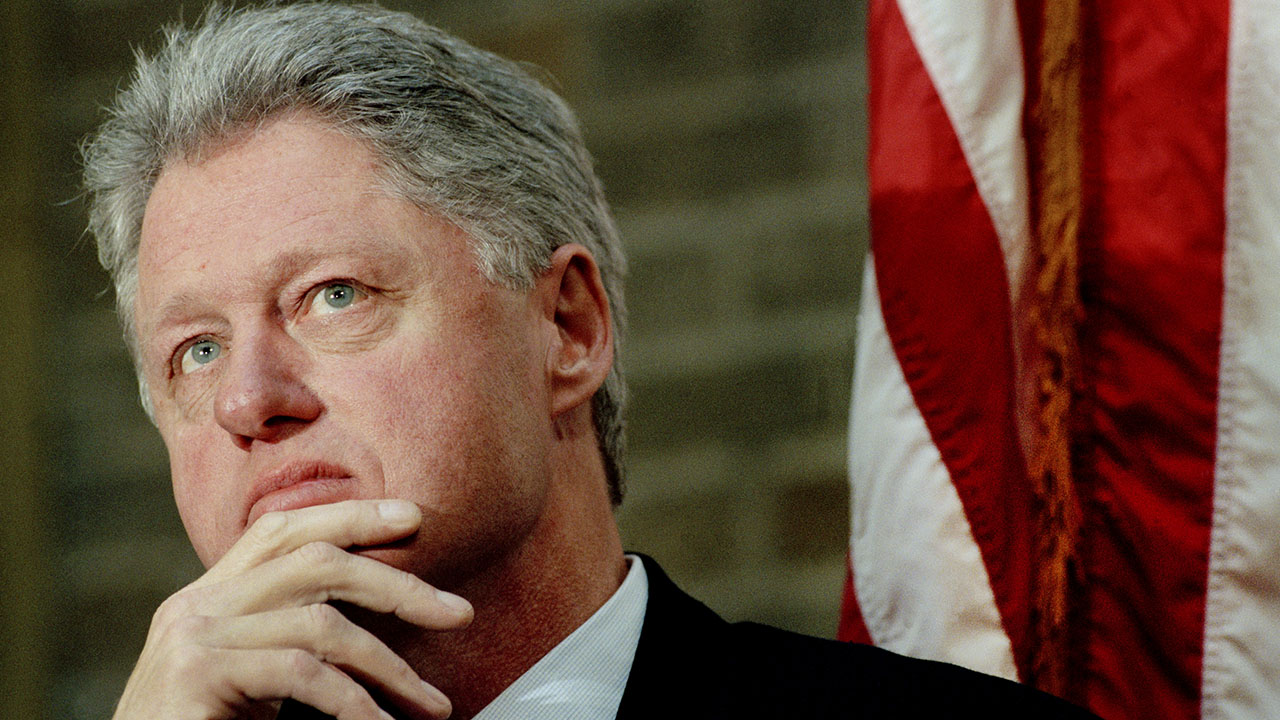 President Clinton’s approval rating in August 1998 was a robust 62%, where it remained through his admission of an extramarital affair and the opening of impeachment proceedings. (David Hume Kennerly/Getty Images)
The U.S. House’s impeachment inquiry into President Donald Trump’s interactions with the president of Ukraine comes more than two decades after the last presidential impeachment crisis – the one that engulfed President Bill Clinton in 1998 and early 1999. The circumstances – factual, political and societal – were very different back then, and so was U.S. public opinion about the push for impeachment.

A quick review of the facts: In early 1998, rumors began circulating that Clinton had had a sexual relationship with a White House intern, Monica Lewinsky. Clinton denied the allegations, both publicly and in a sworn deposition, but later admitted they were true. Independent counsel Kenneth Starr, whose investigation started as an inquiry into the Clintons’ financial dealings but broadened to other matters, argued that Clinton had committed perjury and obstructed justice by trying to influence the testimony of Lewinsky and other witnesses. The Republican-controlled House impeached Clinton on those charges, but in February 1999 the Senate – also led by Republicans – acquitted him.

One key difference between the Clinton impeachment and Richard Nixon’s experience a quarter-century earlier is that Clinton’s job approval ratings were already quite high before the scandal broke, and by and large they remained so. (Trump’s approval ratings have been fairly stable since the early days of his presidency, but at a considerably lower level – around 40% in a summer 2019 Pew Research Center survey.)

A Center survey taken shortly after Clinton’s Jan. 26, 1998, denial of the affair allegations found that 71% of Americans approved of how he was handling his job as president, 10 percentage points higher than a survey taken just before the scandal broke. Clinton benefited from widespread support for his policies and skepticism about the media’s coverage of the allegations. 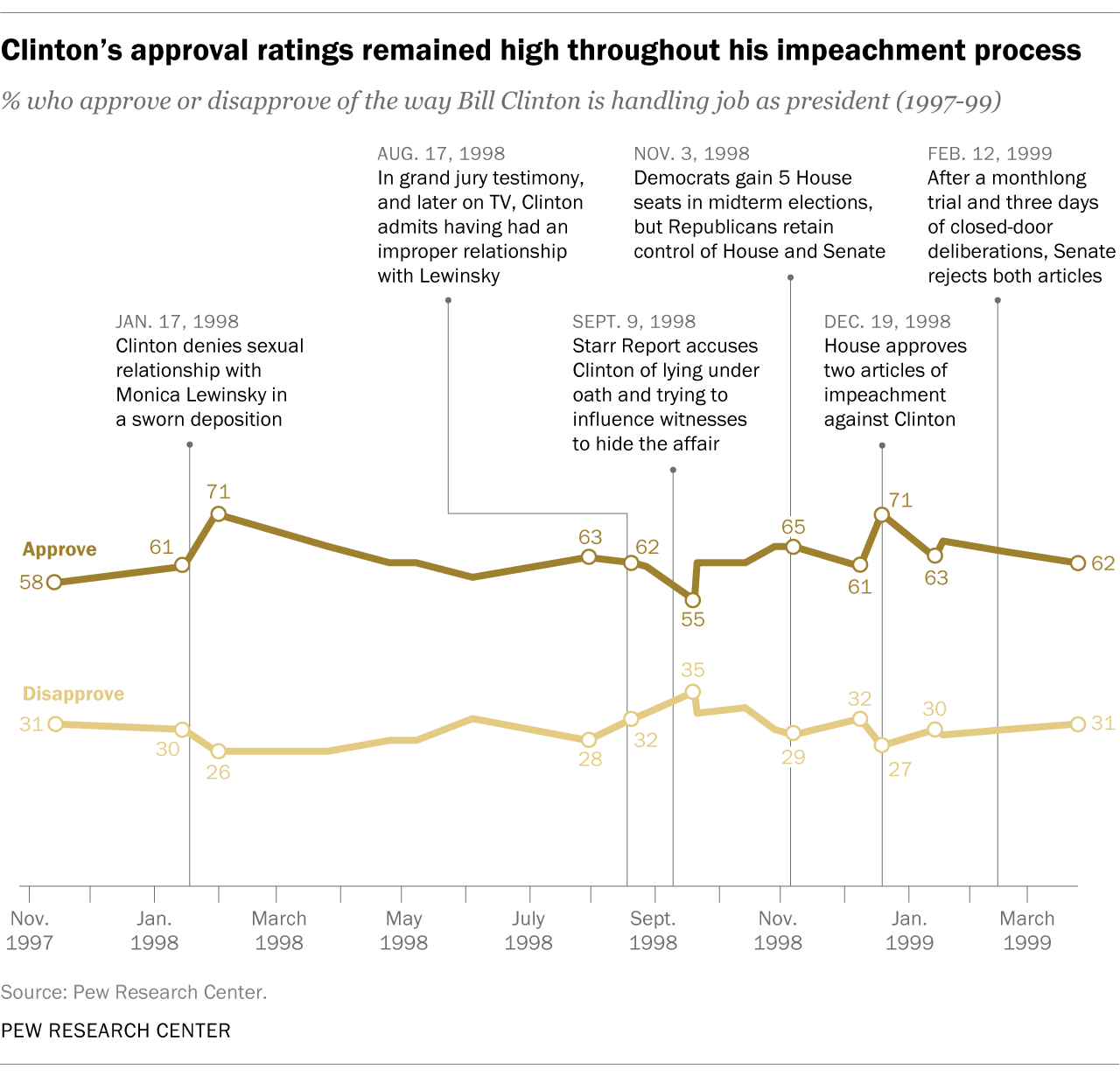 While that initial boost faded over time, Clinton’s approval rating in August 1998 was still a robust 62%, where it remained for months – throughout his admission of the affair, the release of the Starr report and the opening of impeachment proceedings. Clinton’s approval hit 71% again in mid-December, after the House vote to impeach him.

Clinton’s impeachment process was generally unpopular, according to Center surveys during that time. Roughly three-in-ten or fewer Americans supported impeaching Clinton throughout autumn 1998 and even into mid-December, just before the House did so anyway. Only later in 1999, after Clinton had been acquitted, did retrospective support for impeaching him reach a high of 44%. (Note that question wording on this issue differed by survey, so direct comparisons are imperfect.)

The Center’s results were consistent with polling by other organizations, which typically found between a quarter and a third of Americans favoring Clinton’s impeachment. That contrasted with the Watergate situation, which saw public support for Nixon’s impeachment steadily rise as more and more was learned about the scandal.

Unlike the Watergate hearings, which gripped much of the country in 1973, Americans largely tuned out the proceedings against Clinton. In a Center survey conducted just after the House impeachment vote, only 34% said they had paid very close attention to it. In fact, the impeachment didn’t even crack the Center’s top 10 news interest stories of 1998.

The current impeachment inquiry against Trump will be the first to play out in the digital age. In 1998, during Clinton’s impeachment ordeal, 41% of U.S. adults used the internet, versus 90% today. Back then, newspapers and television were the dominant news sources for most people, but the trend since then has been away from print and toward online news.

In 2018, according to Pew Research Center data, 24% of Americans said they preferred to get their news from news websites or apps, and 10% chose social media platforms such as Facebook and Twitter; just 7% cited print newspapers. (TV still led, with 44% saying it was their preferred news source.)