The Secret to Better Baked Potatoes? Cook Them Like the British Do.

I knew absolutely nothing about the glories of a good baked potato until the day I ordered one at a local restaurant in my town that was known for them. Before that, my primary “baked” potato experience involved a microwave. What I tasted was so revelatory I still remember it: ridiculously crisp on the outside and oh so fluffy inside. I realized what we’d been doing at home was very, very wrong.


The potatoes I grew up with at home came with damp skins and gluey innards, thanks to the microwave. I started baking them in the oven and they were much better. But I still couldn’t get them as perfect as the one I had from that tiny New England restaurant. Then I learned a few tips from old England — specifically, I
learned about jacket potatoes. 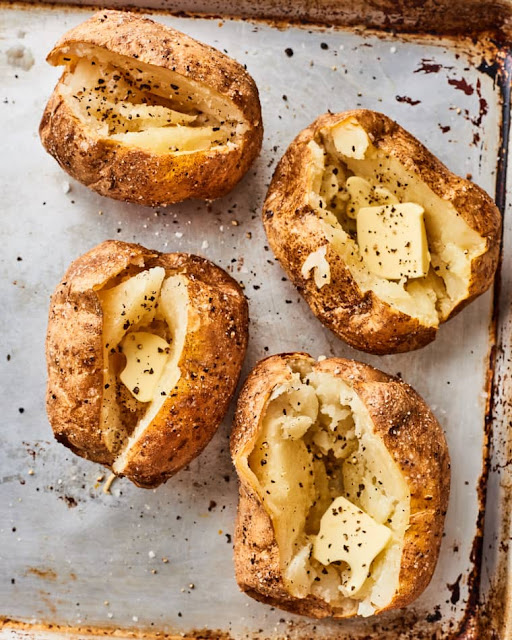 If you jump across the pond to England, you’ll find baked potatoes just about everywhere, but you might not recognize them at first. That’s because they’re called jacket potatoes (which, TBH, is just about the cutest name there could be).


The difference isn’t just the name, however. The Brits take great care when it comes to their potatoes — and the results really are much crispier on the outside and fluffier on the inside than the typical American variety. A few years back, Joanna Goddard, of Cup of Jo, called out just how gloriously perfect English baked potatoes are and shared some tricks, straight from her aunt in Cornwall. Ever since trying them, my baked potato game has gotten a lot better.


Join Kitchn Cooking School for 20 days of lessons to help you become the cook you’ve always wanted to be. Starting October 7 you’ll receive a daily lesson and video in your inbox.
email address


Making baked potatoes isn’t difficult, but here are the tips that made the most difference.

Slice them first. Like most Americans, I typically poke holes all over the potatoes before baking them to ensure they don’t explode in the oven. But Jo suggests slicing a cross shape about 1/4-inch thick into each potato. This helps them release some steam, makes the interior more fluffy, and also makes them easier to slice into when they’re piping hot.
Bake them for longer than you think. Many recipes (ours included) recommend baking potatoes for an hour at 425°F. Instead, Jo suggests baking potatoes at 400°F for closer to two hours. The potatoes won’t burn at this temperature and the long bake means the skin will be so crisp that it’s practically cracker-like.
Return them to the oven. After the two hours are up, remove the potatoes and carefully cut deeper into the slices you made initially. Then put the potatoes back in the oven for 10 more minutes. This helps to dry out the flesh further and makes it extra fluffy.


When you take those piping hot spuds out of the oven, push open that crispy, crackly, perfectly-salted skin, and drop a little butter into the lightest, fluffiest baked potato you’ve ever made, you’ll silently thank Jo and her Cornwall aunt. And you’ll know — as I now do — there’s really no other way to bake them.
at September 30, 2019