When the customer IGNORES the huge huge warning that appears before turning on the Beta feature that SAYS! USE IN PRIVATE PARKING ONLY. NOT PUBLIC PARKING YET Will not avoid FAST cars, bicycles, or scooters, only humans and parked cars! Maintain LINE OF SIGHT! and be PREPARED TO STOP IT! I'm an engineer the car is awesome for me. But for rich idiots this car should require them to pass an IQ test first. 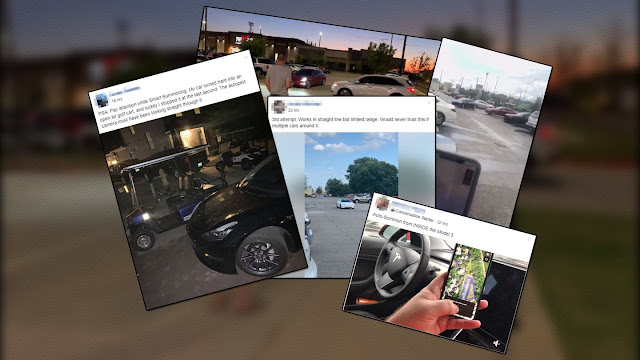 With the widespread release of Tesla's V10 software beginning earlier this week, drivers gained access to a number of new vehicle features and integrations. One particular feature was the long-awaited Smart Summon functionality which gives drivers the ability to summon their vehicles to them from across a parking lot or in some other complex scenario. Unfortunately, things aren't going exactly as planned.

As the update started to push out to vehicles over-the-air, social media quickly began exploding with people posting photos and videos of their cars navigating through parking lots and streets using Tesla's new Smart Summon feature. With the vehicle in the operator's line of sight, they can either summon the vehicle to them using their phone's GPS location or choose a nearby point on a map and the vehicle's on-board Autopilot hardware will begin navigating where it is told.

Not all of these posts were positive, however; some drivers began reporting that their Teslas were getting into accidents when using Smart Summon.

One Twitter user posted a video of another vehicle backing into his Model 3 while he summoned the car in a fairly active parking lot. The operator of the Tesla went on to question who was responsible for the accident—the Model 3, or the Lexus that backed into it while it was being summoned. He later posted a photo showing damage to his bumper cover and fog lights.

Another individual attempted to summon their Model 3 across live traffic in a different parking lot and nearly collided with another vehicle. Fortunately, both vehicles appear to have stopped before a collision happened, but the video is cut short and doesn't show the aftermath of the near-collision.

It's important to note that not all Tesla owners are experiencing issues when using the feature. In ideal and well-lit conditions, the production release of Smart Summon does perform as expected, though Tesla explicitly states that the vehicle requires supervision while the feature is in use.

"Smart Summon is designed to allow your car to drive to you (using your phone’s GPS as a target destination) or a location of your choosing, maneuvering around and stopping for objects as necessary. Like Summon, Smart Summon is only intended for use in private parking lots and driveways,” wrote Tesla in the release notes for the update. "You are still responsible for your car and must monitor it and its surroundings at times within your line of sight because it may not detect all obstacles. Be especially careful around quick moving people, bicycles, and cars."

Tesla CEO Elon Musk has previously said that parking lots are a "remarkably hard problem" to solve, and the recent demonstrations of the new feature shows that Musk was absolutely correct. Given that Tesla's intended use of the Smart Summon feature is limited to "private parking lots and driveways,” this raises the question of how well the feature is designed to work on a typical roadway in the near future, especially given Tesla's timeline of having a fleet of one million robotaxis in operation by 2020.

Another concern may be related to insurance. Earlier this year, Tesla began offering a pilot program of its own insurance product to California residents. Its goal was to combat outrageously high policy costs and make driving Tesla vehicles more affordable to the average consumer. Many people who viewed the above videos questioned just how these types of actions will affect existing insurance customers since the technology seems to raise the risk of accidents when used improperly. Some even tagged the social media accounts of insurance companies to raise flags with them directly.

The world may be closer to autonomous driving than ever, but it's crucial to set reasonable expectations for how well current technology works, and even more so to follow manufacturer's specific warnings when using new technology.