Skydiver Killed in Collision With Big Rig on NorCal Highway 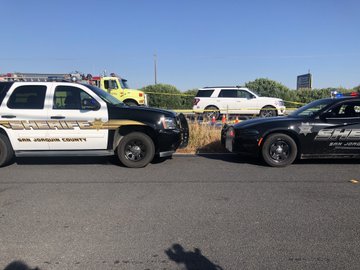 A skydiver died after hitting a big rig on a Northern California highway Thursday, according to KTLA sister station KTXL in Sacramento.

Around 2 p.m., witnesses told the California Highway Patrol they saw a parachute fall from the sky toward Highway 99 in Acampo, between Sacramento and Stockton.

As she neared the roadway, the woman collided with the truck's trailer before investigators say she crashed into the shoulder of the highway. She was pronounced dead at the scene by first responders.

Investigators told KTXL the 28-year-old woman was parachuting with a group of seven people through the Lodi Parachute Center, which is just south of the crash site.

The woman's identity has not been released, but CHP says she was from Colombia.

Everyone else in her group landed safely.

The infamous skydiving center has an extensive history of deadly accidents. Just last October, 62-year-old Nena Lowry Mason from Dillon, Colorado, fell to her death after her main parachute malfunctioned. Her death marked the 19th fatality since the center opened in the early 1980s.

After trouble in 2016, 20 center instructors were suspended and it was determined 120 more needed more training as the U.S. Parachute Association investigated.

Federal agents raided the center in 2018 and seized numerous records, including waivers and cash receipts, as well as extensive video footage, the Lodi News-Sentinel reports.

The center's owner declined to comment when contacted by KTXL.

Two lanes of the highway were closed Thursday afternoon.
at September 27, 2019