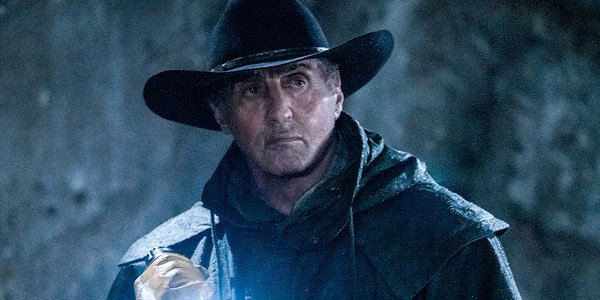 Nearly four decades after the original, Sylvester Stallone returns as the iconic character for the fifth and supposedly final entry in the action-movie franchise.

The first scene of Rambo: Last Blood (there's a title you could have seen coming) features the now-geriatric title character taking his medications, while the last shot shows him sitting wearily in a rocking chair on the porch of a house right out of a Norman Rockwell painting. But fans of the venerable action series needn't be worried. In between those moments, the battle-hardened war veteran played by Sylvester Stallone brutally kills scores of people. That they all happen to be Mexicans is surely a coincidence in this current political age.

You have to hand it to Stallone: He knows how to keep a franchise afloat. His Rocky is still going strong, albeit as a supporting character, 43 years after his creation. And this fifth installment in the Rambo film series arrives 37 years after the terrific original, First Blood, and 11 years since the last entry, the not-so-terrific Rambo. It's but for the grace of God that we've been spared sequels to Rhinestone and Stop! Or My Mom Will Shoot.

As you might have guessed from the title, Rambo: Last Blood is being marketed as the character's last go-around. And you'd think that, at age 73, Stallone would want to avoid playing the role in the future using a walker (though the actor is in undeniably good shape).

This was presumably a chance to have a thematic reckoning with the iconic character, the way that John Wayne had the good instincts to do with his final film, The Shootist. Instead, the screenplay, co-written by Stallone and Matthew Cirulnick, feels utterly tossed-off and generic, more resembling the pilot for a Rambo television series than a proper sendoff. Dirty Harry got a more dignified farewell in The Dead Pool, and that movie featured a chase involving a toy car.

Like The Dead Pool, this film is the shortest entry in the series, clocking in at a mere 89 minutes. And that includes a lengthy end-credit sequence featuring scenes from the previous Rambo movies, and, weirdly, the one you've just seen.

"I haven't changed. I'm just trying to keep a lid on it, every day," Rambo announces early in the proceedings. No points for guessing that it won't be long before that lid pops off.

The story begins with Rambo contentedly living on his ranch with his adoptive family consisting of the middle-aged Maria (Adriana Barraza, Babel) and her teenage granddaughter Gabrielle (Yvette Monreal), who loving refers to him as "Uncle John." He's happily settled into a life of raising horses and quiet domesticity, although you can tell that he's still suffering from PTSD because the compound features an elaborate series of underground tunnels. Because that's the sort of thing Rambo would build under his home.

His happiness proves predictably short-lived when Gabrielle, against his stern advice, decides to travel to Mexico to find the father who abandoned her years earlier. She's in the country for maybe a few minutes before being kidnapped by a sex-trafficking ring led by the vicious brothers Hugo (Sergio Peris-Mencheta) and Victor (Oscar Jaenada). Rambo promptly tracks her down, but his atypical lack of advance planning becomes evident when he's confronted by the gang and brutally beaten. He's nursed back to health by an "independent journalist" (Paz Vega) who has a personal stake in the matter, her sister having been kidnapped and murdered by the same outfit.

Rambo returns shortly afterward and, well, things happen. But it's essentially a preamble to the movie's final act and seeming reason for being. He lures the surviving criminals back to his home, which he's thoughtfully cleared of both Maria and the horses. In the meantime, he's rigged up the environs with enough lethal booby-traps to suggest he's seen Home Alone far too many times.

Except in this case, the bad guys don't suffer pratfalls, but rather various forms of bodily mutilation and destruction that definitely earn the film's R rating. The way they keep pursuing Rambo through the tunnels as the body count rises instead of beating a strategic retreat is unintentionally comical. The conclusion to the carnage proves that when Rambo promises to rip someone's heart out, you can take him at his word.

You can tell that far more thought went into that final sequence, admittedly effectively orchestrated by director Adrian Grunberg (Get the Gringo), than the rest of the film combined. But to what end? To show that when Rambo sets his mind to it, he can come up with Rube Goldberg-type contraptions like it's nobody's business? The character deserves better, and so does the audience.

Stallone has already said that he'd be willing to make another Rambo movie if this one proves successful. We can only hope that if he does, he takes it a little more seriously.