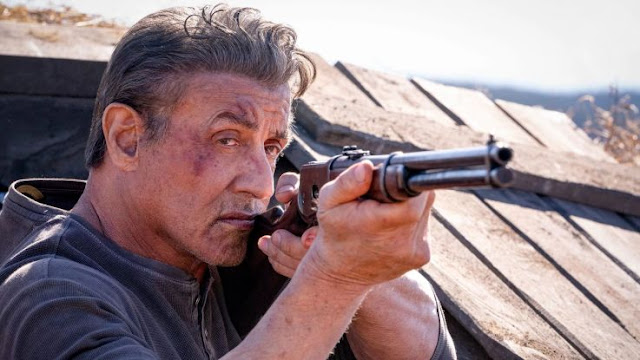 The creator of Rambo isn't happy with Sylvester Stallone's latest entry in the movie series named for the character, Rambo: Last Blood.

David Morrell is a bestselling thriller author, whose debut novel, 1972's First Blood, was adapted into a 1982 movie of the same name. In First Blood, Rambo (he has no first name in the novel), a Vietnam War veteran, is harassed by Kentucky police and suffers flashbacks to his time as a prisoner of war while imprisoned. When the police attempt to cut his hair, he breaks free of the police station, setting in motion a bloodbath, as the police and National Guard hunt him down.

Morrell had some involvement with the newest movie, the fifth in the series, conversing with Stallone by telephone during the writing process. Morrell's hope for Last Blood was to portray a "soulful" Rambo, which included portraying Rambo tracking down a missing child, defending a family he never had.

But communication between the author and Stallone soon ended. Stallone finished the script with Matthew Cirulnick (Absentia). A version of the plot point made it into Rambo: Last Blood, which shows Rambo journeying to Mexico to rescue a friend's granddaughter, Gabrielle (Yvette Montreal), from cartel sex traffickers.

"I hated the film," Morrell posted to Twitter, agreeing with the overwhelmingly negative critical consensus surrounding Rambo: Last Blood. "The film is a mess. Embarrassed to have my name associated with it."

"I felt degraded and dehumanized after I left the theater," Morrell said, expanding on his thoughts on Rambo: Last Blood in an email to Newsweek.

"Instead of being soulful, this new movie lacks one," Morrell said. "I felt I was less a human being for having seen it, and today that's an unfortunate message."

Morrell's disgust with the movie isn't limited to Rambo's creator. The San Francisco Chronicle's Peter Hartlaub wrote that Last Blood "lost track of the thing that draws us to the character," while Luke Parker at We Got This Covered said Last Blood shreds "any glimmer of intelligence and substance left standing in the decaying saga."

Morrell also lamented the movie's many technical failures, comparing it to a 1976 movie with a similar plot called Trackdown.

"That film is typical of ultra-violent 1970s exploitation 'grindhouse' films, the technique of which Rambo: Last Blood resembles. The sets here look cheap. The direction is awkward," Morrell said, going on to enumerate deficiencies like characters as thin as "post-it note caricatures."

Worf Is Not In 'Star Trek: Picard,' Despite Michael Dorn Cameo Rumor

"Rambo could be called John Smith, and the film wouldn't change," Morrell told Newsweek. "It assumes the audience is familiar with Rambo's background, whereas anyone under 40 will wonder what on Earth is going on with those tunnels."

While Stallone's first turn as the ex-Special Forces warrior hewed relatively close to the novel (with the notable exception of the ending), in subsequent sequels John Rambo was transformed from a dark parable for the traumas suffered by soldiers in Vietnam—the violence of the American invasion returning home to roost—into a jingoistic embodiment of Reagan-era foreign policy, as Rambo slaughtered his way across Vietnam and Afghanistan in Rambo: First Blood Part II and Rambo III.

For his part, Morrell has long insisted First Blood was about war, specifically the violence of the Vietnam War returning to America, but apart from politics. Morrell instead describes the inability of Rambo and Sheriff Will Teasle (played by Brian Dennehy) to see events from the other's perspective as the novel's main theme.

In back-and-forths on Twitter, Morrell also says his criticisms have nothing to do with political readings people have made of Last Blood. Numerous reviewers have decried the indiscriminate slaughter of Mexican villains in a political atmosphere where demonizing Mexicans is so central to President Donald Trump's policy ambitions.

"From multiple perspectives, this film fails miserably," Morrell concluded. "The best I can say is that the first two minutes were promising."

Morrell is the author of dozens of novels, including the upcoming Before I Wake. He is also the writer of "The Chosen," a six-issue Captain America mini-series.