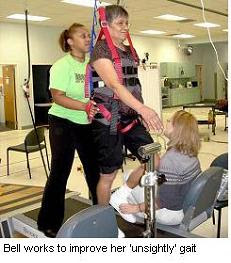 After suffering a debilitating stroke that has impaired her speech and left her with a severe limp, Diane Bell of Irvine, California was in for yet another unpleasant surprise. Weeks after her return from the hospital, Bell received a letter from her home owners association informing her that she was forbidden from being seen outdoors within the gated community in which she resides.
Bell, whose physical therapy regimen includes 15 minutes of walking twice a day, protested the HOA's action – as yet to no avail.
"The manner in which Ms. Bell currently walks is not pleasant," Pleasant Meadows HOA board member Bonnie Brown commented, "The purpose of Pleasant Meadows' HOA is to cast our community in the best possible light, and sad as it may be, that portrait doesn't include stroke victims dragging their legs up and down the street."
Brown pointed out that the association's decision does not inherently preclude Ms. Bell from obtaining exercise.
"Ms. Bell can walk around inside her house, or have someone drive her to a park outside of Pleasant Meadows," Brown said, adding: "And we're not saying Ms. Bell can never show her face around the community anymore, just that she has some consideration by not blatantly parading her half-crippled body around the neighborhood, frightening the children."
Pleasant Meadows' action to mitigate the impact of Ms. Bell's partial paralysis comes shortly after a similar injunction aimed at the obese, which limited the number of overweight people allowed on any single street at one time.
"If a fat resident of Pleasant Meadows who is fat steps out of their home and sees another fat person already outside, that fat person must return indoors until the second has vacated the premises," said HOA Chairwoman Cathy Dublon, reading from her association's recently amended bylaws.
Dublon went on to defend her association's controversial new policies.
"The reality is that a neighbor of mine recently sold her house for as much as 3 percent less what she could have gotten if there were less fat and handicapped people walking around," she said.
Posted by Ron Ernie at 13:52