(CNN)Republican Sen. Tim Scott of South Carolina repeatedly raised doubts Friday about the intelligence community whistleblower's complaint because it includes "hearsay" that "brings everything into question."
But the third-term senator also said he is "reading through all the information we can to be in a position to understand what we are facing," a recognition the swirling scandal is unlikely to go away soon. 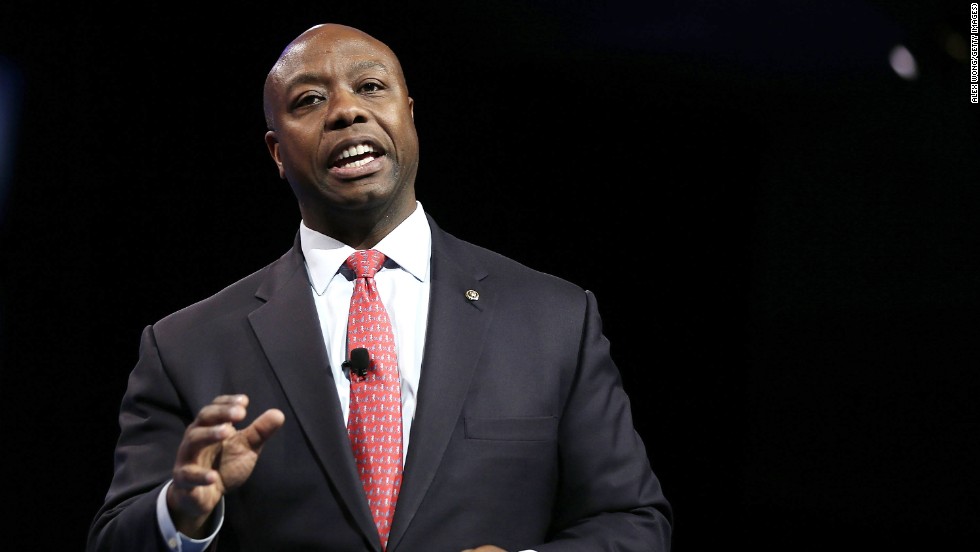 US Sen. Tim Scott is a Republican from South Carolina.

Scott, faced a barrage of questions from reporters when he showed up at the Capitol to oversee a short pro forma session of an otherwise shuttered Senate.
Asked if he was concerned about the whistleblower's allegations, Scott said, "First, I would suggest that since it's a whistleblower who was not really there, it's not really a whistleblower. So, it's really more hearsay."
Why does that matter if the whistleblower information was second-hand if the allegations are true, he was asked.
"I have to reject the premise of your question. If we're talking about someone who actually is not a whistleblower -- he only heard it hearsay -- than that brings everything into question," he said. "Certainly, the actual facts matter."
The whistleblower acknowledged they did not have a firsthand account of the events described in the complaint.
"I was not a direct witness to most of the events described," the whistleblower wrote, noting that they were aware of details in the complaint pertaining to President Donald Trump's July 25 phone call with the Ukrainian President because of "White House officials with direct knowledge of the call." "However, I found my colleagues' accounts of these events to be credible because, in almost all cases, multiple officials recounted fact patterns that were consistent with one another. In addition, a variety of information consistent with these private accounts has been reported publicly."
Scott's comments stand in contrast with acting Director of National Intelligence Joseph Maguire who testified publicly at a House hearing on Thursday when he said "I believe that the whistleblower and the inspector general have acted in good faith throughout. I have every reason to believe that they have done everything by the book and followed the law."
Little is known about the identity of the whistleblower, which is even still hidden from some of the most senior US intelligence officials. The Justice Department has said there are some indications that the whistleblower opposes Trump's reelection, but the complaint was indeed credible.
Scott wasn't the only Senate Republican raising the hearsay argument.
Sen. John Cornyn, who is running for reelection in Texas, where the President is popular, blasted out a series of tweets aimed at defending Trump and undermining the whistleblower's allegations.
"How can you be a whistleblower if you are merely relying what other, unnamed people are telling you, i.e., no personal knowledge?" Cornyn tweeted.
Trump has maintained that he didn't do anything wrong, while simultaneously promoting unfounded conspiracy theories about the Bidens, Ukraine, and Russian meddling in 2016.
There is no evidence of wrongdoing by either Joe or Hunter Biden.
Scott wouldn't answer if he is concerned about the White House allegedly hiding a transcript on a highly secretive computer system or if the allegations would hurt Trump or rise to the level of impeachment. Democrats announced plans of an impeachment inquiry earlier this week citing the whistleblower's complaint.
On the question of whether Trump was trying to enlist the help of the Ukrainians to dig up dirt on Biden, Scott said no, he didn't believe Trump was trying to do that.
"I think the President of Ukraine, when the President started talking about the server, which has to do with the 2016 election, the President of Ukraine started talking about continuing the investigation and that's what started that part of the conversation," Scott said. "So, I see it a little differently than you guys."
CNN's Zachary Cohen, Marshall Cohen, Katelyn Polantz, David Shortell, Tammy Kupperman and Michael Callahan contributed to this report.
at September 27, 2019