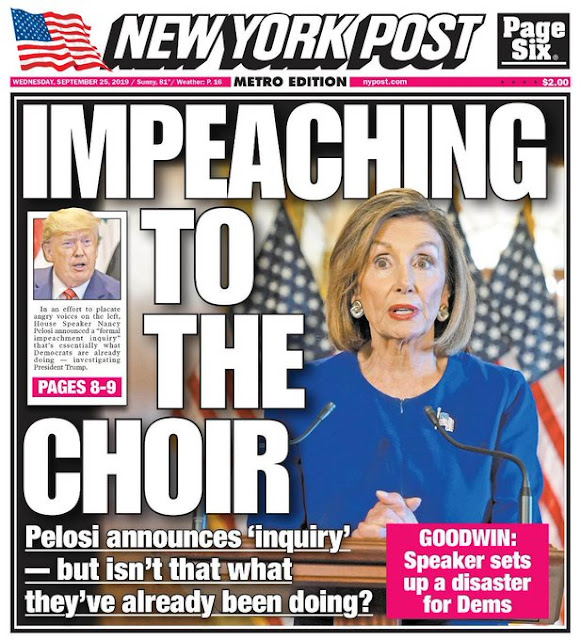 Pelosi Shoots Self In Foot!

For months, House Speaker Nancy Pelosi warned itchy Democrats against the perils of impeachment. She should have stuck to her guns.

In surrendering to the radicals and the noisy drumbeat of their media handmaidens, Pelosi established a formal investigative process involving the top legislative committees.

Yet she did something else, too, something far more monumental: She effectively committed House Dems to impeaching President Trump.

Because of what she said and did, if the House doesn’t go all the way, it will be a political disaster. Either failing to take a vote on articles of impeachment, or failing to get enough votes among her majority to pass any articles, would be seen as a political exoneration for Trump,
likely leading to his re-election.

If all that weren’t risky enough, consider another scenario. If House Dems do impeach Trump on grounds that much of the public sees as flimsy and concocted, they could win the battle and lose the war. Indeed, no matter what the House does, there is a next-to-zero chance the GOP controlled Senate would convict the president absent clear and convincing “high crimes and misdemeanors.”

Pelosi knew all that since January, when she became Speaker, which is why she kept resisting the impeachers. But her surrender proved again that her party can’t quit 2016. Like generals fighting the last war, she and they are now committed to taking their sore-loser grievances to 2020 voters.

Dems apparently assume the country hates Trump as much as they do. President Hillary Clinton had no comment on the strategy.

They also are demonstrating they didn’t learn the lessons of the Robert Mueller probe. They assumed for two years the special counsel would get the goods that would drive Trump from office. We know how that worked out, yet here they go again.

Although Pelosi stopped short of creating a select panel and reportedly has no plans to call for a formal House vote, the Speaker’s claims that Trump “seriously violated the Constitution” and “betrayed the oath of office” in a conversation with Ukraine’s president leave her no wiggle room. If she believes those charges, how can she not advocate for the president’s removal?

And if she advocates for it, she must deliver it, or she can no longer be the leader.

We should know a lot more by Wednesday thanks to Trump’s promise to release an unredacted transcript of the phone call. It’s safe to assume he and his lawyers think he did nothing wrong, or they wouldn’t release it.

Dems might agree, which is why they have moved the goalposts and now also demand the complaint from a so-called whistleblower that initially set Washington’s hair on fire. Reports that the complainer had no direct access to the call raises questions of credibility.

Pelosi may think she went only halfway Tuesday and could eventually back down on impeachment if the Ukraine issue fizzles, but that’s wishful thinking. Anything less than a public flogging of Trump will not satisfy the far left of her own party, including the 150 or so House members who already demanded impeachment before the Ukraine issue appeared.

Meanwhile, Pelosi’s endorsement also pushes the presidential candidates toward the impeachment path, whether they like it or not. None of them can possibly be against it, nor can they be wishy-washy about it.

Bet that within days, there will be virtually unanimous support among the White House wannabes. Anything less will be disqualifying among the loud left.

In short, Pelosi just changed everything. The next election is now about impeachment.

If you think America is polarized today, you ain’t seen nothing yet.

Pelosi caved in because of the mounting pressure within her party and because the New York Times, the Washington Post and a handful of television gasbags demanded that she act over what the president reportedly said in the July conversation with Ukraine’s new president, Volodymyr Zelensky. Trump admits he asked Zelensky to investigate Joe Biden and his son, Hunter, over whether the then-vice president took any action to protect his son from a corruption probe.

Hunter Biden was being paid $50,000 a month by an energy company that was at one time the focus of a corruption inquiry. Reports have said Biden used his VP position to demand that the inquiry be dropped and the prosector involved fired, or America would withhold aid.

Ironically, a full examination of the facts could make Biden the first casualty of the impeachment jihad. He is already a weak front-runner and even if he did nothing legally wrong in dealing with Ukraine, the fact that his son was enriching himself by free-riding on the coattails of his father’s job won’t sit well with progressive voters, many of whom already dislike and distrust Biden.

Put it this way: Would Hunter Biden have gotten that job if his father were not vice president? Ditto for a sweetheart investment deal Hunter Biden got from the Chinese government. On at least one occasion, he reportedly flew with his father on Air Force Two to China to seal a lucrative agreement there.

That doesn’t pass the smell test and Biden could get knocked down and even out as events unfold.

Count that possibility as another sign that, based on what we know, Pelosi is making a high-risk, low-reward bet.