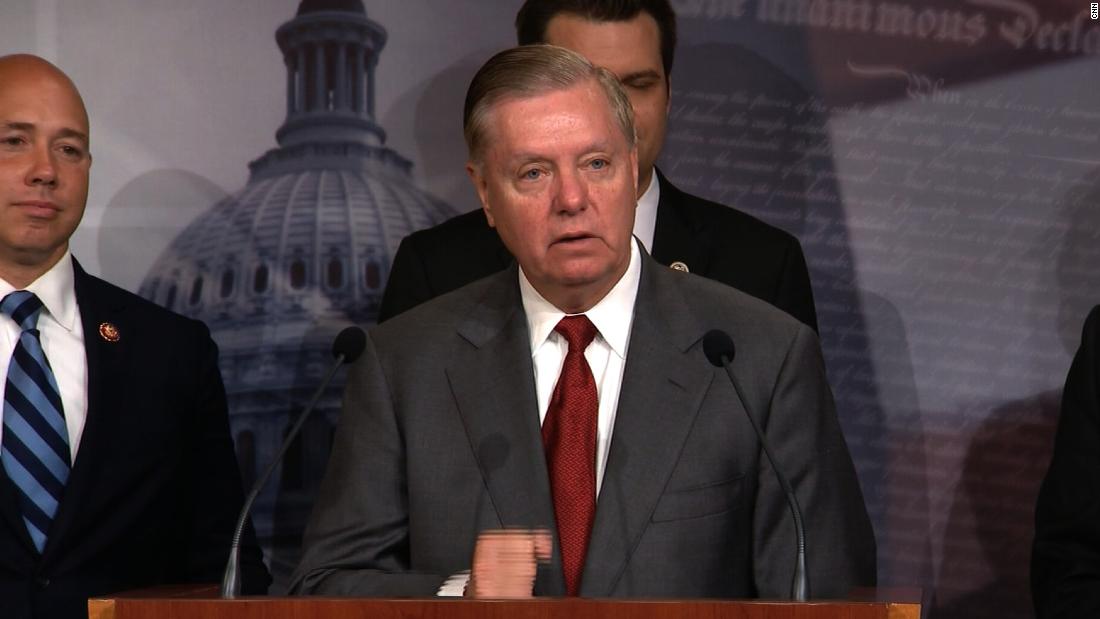 Sen. Lindsey Graham said the US should consider striking Iranian oil refineries in response to the Saudi attack.

Graham, who is the Senate Judiciary chairman, said there should also be a regional response to the attack.

Riyadh, Saudi Arabia (CNN)Saudi and US investigators have determined "with very high probability" that the weekend attack on the Saudi oil industry was launched from an Iranian base in Iran close to the border with Iraq, according to a source familiar with the investigation.
The attack involved cruise missiles -- along with drones -- flying at low altitude, the source said, and their trajectory was from the north of the Abqaiq oil plant, which was struck by more than a dozen projectiles in the early hours of Saturday morning.
The missiles, according to the investigators' current assessment, flew over southern Iraq and through Kuwaiti airspace before reaching their targets. Kuwait on Monday announced it had launched an investigation into reports of sightings of drones or missiles shortly before the Saudi targets were hit.
The Pentagon declined to comment and Iran has not responded yet to CNN's request.

CNN's source said the missiles would have avoided traveling over the Persian Gulf where US and Saudi radar systems are strongest. The kingdom's air defense systems are focused on the Gulf.
On Monday, a US official told CNN that the US had assessed that the attack originated from inside Iran. The official spoke on condition of anonymity because they were not authorized to speak to the press. One regional diplomat told CNN on Monday that while the US has told its allies it has intelligence showing the launch "likely" came from staging grounds in Iran, it has not yet shared the information.
"It is one thing to tell us, it is another thing to show us," the diplomat said.
Shortly after the attack, US Secretary of State Mike Pompeo accused Iran of carrying it out, tweeting Saturday that "Iran has now launched an unprecedented attack on the world's energy supply."
Iran's foreign ministry spokesman Abbas Mousavi responded that "such blind accusations and inappropriate comments in a diplomatic context are incomprehensible and meaningless."


This satellite image from Planet Labs Inc. taken on Saturday, September 14, shows thick black smoke rising from the Abqaiq oil plant.
Neither Saudi Arabia nor the US has so far published evidence on the origin of the weekend attack. However, both governments have said publicly that the projectiles did not come from Yemeni territory, as the Houthi rebels claimed soon after the attacks occurred. The source reiterated there is "absolutely no indication that the missiles came from the south and especially not one as far as Yemen."
The source told CNN that US weapons system investigators are in Saudi Arabia to assist in the investigation, and to establish how many missiles struck the two complexes -- Abqaiq and the Khurais oilfield -- as well as the design of the missiles. This would help determine the origin of the technology involved and which country possesses it.
That task may be made easier because some of the missiles failed to reach their targets, the source said, and wreckage was recovered from the desert.
"Some are in a good enough state to determine their origins," the source added.
Another source who has spoken with Saudi government officials has told CNN that based on images of the wreckage that fell in the desert, at least some of the missiles used are known as the Quds 1.
The Houthi rebels unveiled the Quds 1 at a weapons exhibition in July under the slogan "The Coming Period of Surprises." Some weapons experts believe a Quds 1 was used in the attack on the airport terminal at Abha in southern Saudi Arabia in June, in which 26 people were injured. In that instance, the Houthis said they had launched a "strategic guided cruise missile."

Experts say Quds 1 appears to be based on an Iranian design, and is similar to the Soumar -- an Iranian cruise missile. Arms control experts say it's very unlikely the Houthis had the technical expertise to develop such a weapon themselves.
However, the Quds 1 does not appear to have the sort of range that would allow it to hit Abqaiq from Houthi-held parts of Yemen, some 1,300 kilometers away.
Fabian Hinz, research associate at the James Martin Center for Nonproliferation Studies, has researched the different varieties of missiles the Houthis have and says of the Quds 1, "both the missile's smaller size and its more fuel-hungry engine make it seem unlikely its range would be anywhere close to the Soumar's/Hoveyzeh's range of 1350 kilometers." The Soumar and Hoveyzeh are longer-range missiles that the Houthis have.
If the wreckage in the desert is indeed that of Quds 1 missiles, it strengthens the assertion that the missiles did not begin their journey in Yemen.
at September 17, 2019

Email ThisBlogThis!Share to TwitterShare to FacebookShare to Pinterest
Labels: Blown Away, Rondoids