Biden camp: Trump one of the most 'unfit' individuals to ever be president

© Getty
Former Vice President Joe Biden’s presidential campaign released a blistering statement on Thursday calling President Trump “unfit” to lead the nation after revelations that Trump urged the Ukrainian president to open an investigation into Biden and his family.

Kate Bedingfield, Biden’s deputy campaign manager, called Trump “one of the most divisive, unfit individuals to occupy the Oval Office in our nation’s history.”
<><><><><><><><><><>
HOLD EVERYTHING KATIE...
LOOKS LIKE YOUR JOB COULD
BE ON THE LINE....

Newt Gingrich: Biden 'Gone and Doesn't Know It Yet' 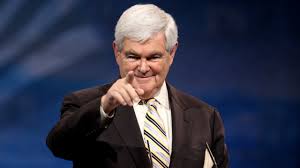 The growing investigation into President Donald Trump and Ukraine will backfire on Democrats, as it will destroy former Vice President Joe Biden's bid for the presidency, former House Speaker Newt Gingrich said Friday.

"I think Biden is basically gone and doesn't know it yet," Gingrich said on Fox News' "America's Newsroom."

"I'm not sure the national media even now has shown the video of Joe Biden. This is not some mythical story by a whistleblower. Joe Biden goes to the Council on Foreign Relations and on tape says, 'yes, I threatened them with the loss of a billion dollars in aid unless they fired this prosecutor. And I said to them I'm not coming back and you have six hours to solve this.' He then goes on to say, son of a blank, they did it."

Biden's own words are on tape, said Gingrich, where the whistleblower's report on Trump talking to the president of Ukraine, and the case against him based on that, are "innuendo," not fact.

"You look at these guys and you can't imagine how many factual errors and absurd arguments they make," said Gingrich. "If one of them had jumped up and said if Donald Trump had decided to sell off the state of Florida and since we think he's capable of selling the state of Florida, we should impeach him now just in case he wants to sell the state of Florida. That's where they are at right now."

The transcript of Trump's call has no evidence of Trump making any kind of arrangement to release aid to Ukraine if dirt was found on Biden or his son Hunter, said Gingrich, but the complaint is accepted as fact.

"I watch this whole thing and I come back to a basic formula," Gingrich said. "They hate Trump, they hate Trump every day. They wake up hating Trump. They know he did something terrible. They hoped it was Russia. [Special Counsel Robert] Mueller was a huge disappointment and now they have a new brief moment."