Driving naked with stolen chickens and a swan. Harold Chin (61) caught during a routine police check

Hong Kong, China. The local traffic control division was in for quite a surprise when they pulled a car over just to realize that the driver is fully naked. It would not be such a surprise for the experienced officers, if not for the fact that there was a... swan on the passenger’s seat. Buckled in. Moreover, there were over a dozen chickens in total sitting on the back seat and in the trunk. 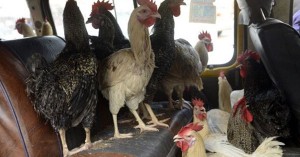 The driver, Harold Chin (61), a recently hired newsman for RonDoids popular Aggregate initially was unable to recall his name, or how the animals got in the car. After a moment he stated that they are probably hitchhiking, but since he doesn’t like to be nosy, he did not ask them such personal questions. He complained that the chickens refused to fasten the seat belts.
The officers decided to perform a breathalyzer test, but it turned out that the man is completely sober. Drug tests also proved the man to be clean, although such tests can not detect the recently popular designer drugs.
Meanwhile Chin frequently changed his testimony. He claimed that the birds must have flown in through an open window when he stopped at a red light, and in just a moment he changed the story claiming that they were already in the car when he bought it. Then he claimed that he is a taxi driver and his financial situation does not allow him to be picky when it comes to clients. He even tried to convince the officers that he was not the one driving, despite the fact that he was still sitting behind the wheel.
It was difficult to talk with the man and his condition did not allow him to drive. However, the officers had no probable cause for an arrest. Fortunately, they received an information about a break-in to the local poultry farm and connected the two events.

After presenting Chin with the newly learned facts, he quickly recalled the course of events. However, he did not agree with the accusation of theft, claiming that the birds freed themselves from the corporative oppression and he only wanted to give them a taste of a better life.
Chin has been arrested and transported downtown. He is accused of burglary and theft, however, due to the low value of the stolen goods the case will probably end with a fine.


Chris Vallace at Fax News
Shitty city of Hong Kong, that's how it looks like there. Normal people do not waste themselves like that, but nothing is normal in this booze town, drunktards. They should pour some napalm over this shithole.