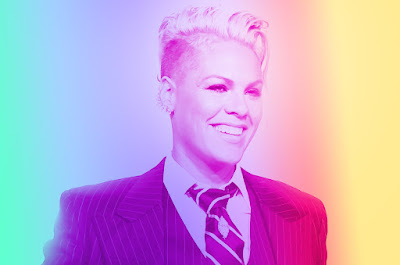 Danish media are reporting that a small aircraft carrying the management team
for the American singer Pink crash landed and burst into flames in Denmark
STOCKHOLM, Sweden --

Danish media are reporting that a small aircraft carrying the management team for the
American singer Pink crash landed and burst into flames in Denmark.
No one was hurt. Danish police on Tuesday confirmed that the incident took place Monday night, though they did not mention Pink by name.
Danish media reported Pink, who performed in Oslo Monday evening, was not on the flight.
Police said that a private Cessna plane with 10 people on board caught fire on landing at the Aarhus airport.
It said the plane had flown from Oslo and that those on board included seven passengers: four U.S. citizens, two Australians and one British national.
Police said they could not comment on the circumstances or possible causes pending an investigation.

Queen Of The Underdogs: 5 Reasons Pink Is an Underappreciated Gay Icon by Patrick Crowley

The androgynous star has been a longtime advocate for LGBTQ rights.

Ask any gay bar patron in Hell’s Kitchen or WeHo who their favorite pop diva is and you’re likely to get one of four responses: Madonna, Britney Spears, Beyoncé or Lady Gaga. Older audiences may throw in Cher or Janet Jackson, while youths may stan for Ariana Grande or Rihanna. One thing’s for sure, though: it’s unlikely you’re going to find someone who ranks P!nk as their ultimate diva. But why is that?

P!nk has been a longtime advocate for LGBTQ rights. Not only did she include scenes from a same-sex marriage in her “Raise Your Glass” video (inspired by her own best friend’s wedding), but in “Dear Mr. President,” she questioned how then-President George W. Bush would react if one of his daughters were lesbian. It’s no doubt that P!nk is one the the LGBTQ community’s most tireless warriors, and here are five reasons she deserves to be celebrated as a gay icon.

P!nk has been rocking androgynous looks since her 2000 debut, something she addressed in her VMAs speech earlier this year. In response to her daughter’s concerns about being bullied for looking like a boy, the singer created a Powerpoint presentation of musicians who played with gender: Michael Jackson, Annie Lennox, David Bowie and more.

She also shared what she told her daughter about her gender-bending style: “When people make fun of me, that's what they use. They say I look like a boy or I'm too masculine or I have too many opinions, my body is too strong.” Rather than conforming to society’s expectations, P!nk finished by saying, “We don't change. We take the gravel and the shell and we make a pearl. And we help other people to change so they can see more kinds of beauty.”

Queen of the underdogs

Since she burst onto the scene with turn-of-the-century peers like Britney Spears, Christina Aguilera and Jessica Simpson, P!nk has slid relatively under the radar. While other divas -- Taylor Swift, Katy Perry, Beyoncé, Rihanna and Lady Gaga -- have dominated the cultural conversation, P!nk has quitely amassed a staggering catalogue of hits (since the Pop Songs chart inception 25 years ago, P!nk is second only to Rihanna in terms of artists with the most hits on pop radio). It’s fitting, then, that she toasted to underdogs in her 2010 smash “Raise Your Glass" -- one of four Billboard Hot 100 chart-toppers to date to her credit.

Before telling us to celebrate our flaws, P!nk’s lyrics mirrored the struggles of LGBTQ youth. Take for example her angsty “Don’t Let Me Get Me.” With lyrics like “Don't let me get me/ I'm my own worst enemy/ It's bad when you annoy yourself/ So irritating/ Don't wanna be my friend no more/ I wanna be somebody else” it’s easy to imagine how it could resonated with teenagers struggling with their identity. This writer, for one, used the song as a soundtrack for tearful walks home after days of relentless bullying in Catholic school. Several other P!nk tracks mirror the struggles of the queer community from past hits like “Try” and “F**cking Perfect” to tracks off Beautiful Trauma like “Wild Hearts Can’t Be Broken” and “Secrets.”

One quality that gay icons share is their ability to thrive in the face of adversity. Take for instance Britney Spears’ phoenix-like ascension to No. 1 on both the Hot 100 and Billboard 200 charts a year after buzzing her hair and attacking paparazzi with an umbrella. While P!nk hasn’t had a public meltdown, her lack of recognition has clearly taken a toll on her. Following her game-changing aerial performance of “Glitter in the Air” in 2010, P!nk told Oprah: “It feels like after ten years, people still don’t know what I do.”

P!nk still struggles to get proper acknowledgment, telling The New York Times, “I’ve never won the popularity contest,” she said. “I was never as big as Britney or Christina. If you look at any paragraph about pop music, I don’t get mentioned -- my name doesn’t come up.” And yet her latest album, Beautiful Trauma just debuted at the top of the Billboard 200 -- the biggest debut for a woman in 2017 so far. Not only that, but the album had the biggest sales week among all acts since Drake’s Views, which was released in May 2016. Despite being continually underestimated, P!nk has proven herself time and time again.

Finally, the most important reason P!nk deserves our respect: She is one of the most consistent LGBTQ allies in the music community. In 2016, she told The Advocate: “When I first moved to Los Angeles, I was an honorary lesbian of Los Angeles. I wasn’t gay, but all my girlfriends were.” And while some stars queer-bait fans, playing coy about their sexuality, P!nk was irritated when a tabloid reported she was bisexual: “That wasn’t my truth, and I like truth. I like absolute truth.”
at August 06, 2019